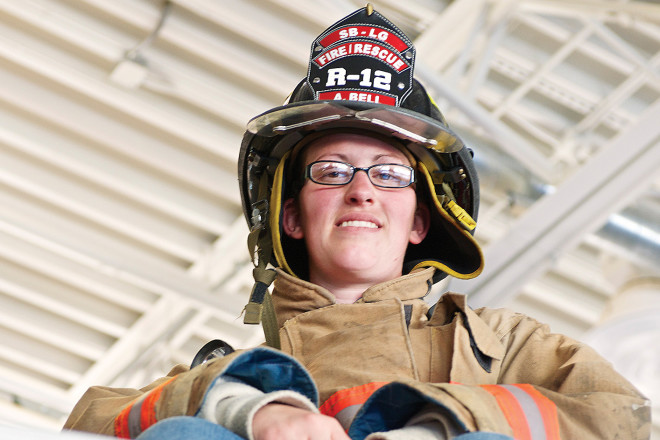 Stacy Bell and I sit in the kitchen at the Sister Bay Fire Station, chatting about her life and Door County, when a bit of commotion starts in the hallway behind us. There’s a sound of hurried footsteps that, in a fire station, can only belong to firefighters about to head out on a call.

“Is that us?” asks Stacy, as she stands up to poke her head out into the hallway. “That’s us. We’ve got a brush fire.”

And just like that she’s in a truck and out the door.

She comes back into the kitchen about 20 minutes later, telling me she’ll just be a minute as she takes off her fire gear. When she sits back down at the kitchen table I ask her what it’s like, that feeling of knowing at any time a page could come and she could be on her way to a fire or some other emergency.

Stacy’s a Chicago native, but she’s lived in Door County since the sixth grade (she graduated from Gibraltar). You can tell that Door County fits her better than Chicago ever would. She sells herself as ordinary and slightly shy, a person who very much wants to blend into the crowd.

“I don’t go out very much. I’m a pretty quiet person most of the time,” she says. “I just try to play by the rules and live each day.”

“Tenacious and brave would be the two words I would use to describe Stacy,” says Sister Bay Fire Department Captain Mike Goldstone. “I think if there’s something she’s afraid of, she embraces it. It propels her forward rather than driving her backward.”

Goldstone counts Stacy as one of the department’s core firefighters, saying she always challenges herself to do better and she’s excellent on a scene. She also fits well into the fire department family, a group where the ability to take and dish out crap is just as necessary as bravery.

“I’m an only child,” says Stacy, “so now it’s like I have a whole bunch of brothers. We pick on each other like family would.”

Stacy joined up with her brothers in 2010, after Sister Bay/Liberty Grove Fire Chief Chris Hecht had actually approached her husband, Nate Bell, about joining the department. Nate works for NEWWIS, an IT company that already keeps him on call a large part of the time, so he wasn’t looking for another pager to attach to his hip.

But he thought the job might be perfect for Stacy.

“She doesn’t deal with boredom very well, and she always wants to be doing something,” says Nate. “I said ‘Maybe you should think about doing this.’”

Three years later, Stacy’s spending 20 hours a week at the station, taking new certification classes whenever they come up, and making weekly lunches for the crew.

“She’s very much into trying to make everyone on the fire department feel like part of the family,” says Nate. “She’s a very caring person. She cares about stuff, and she cares about this very passionately.”

Caring, says Stacy, is why she joined the department in the first place. She cares about the community that saw her through middle and high school and gave her a place to come back to when she was done with college.

What the community always needs are people who will help when others are in trouble, who will be there in an emergency. The community needs familiar faces willing to lend a helping hand in tough times.

“There have been some calls that either I’ve known the people on the fire scene or the people in the EMS situation and it’s been really fulfilling to me,” says Stacy. “Sometimes seeing a familiar face just helps people. So to be that familiar face is a good thing.”

If Stacy has her way, she’ll continue to be that familiar face on the scene until she’s unable to do the job any longer. In emergency services, in Door County with Nate, she’s found a life for herself.