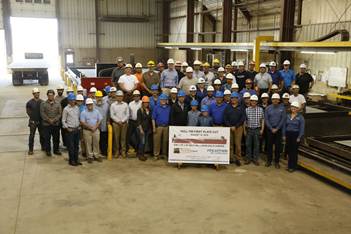 Fincantieri Bay Shipbuilding and the Interlake Steamship Company held a ceremonial first-cut-of-steel event to celebrate the start of construction on the first U.S.-flagged Great Lakes bulk carrier built in more than 35 years.

“The first cut of steel is a major milestone that signifies we, along with Fincantieri Bay Shipbuilding, are ready to begin production on this historic project,” said Interlake President Mark Barker. “We are extremely proud to build our company’s first ship since 1981 on these freshwater shores with the hardworking women and men who help power our industry, and with American-made steel from the iron ore we carry on our U.S.-flag fleet vessels. It’s a true Great Lakes success story.” The new river-class, self-unloading bulk carrier is believed to be the first ship for U.S. Great Lakes service built on the Great Lakes since 1983. Measuring 639 feet in length, the ship will transport raw materials to support manufacturing throughout the Great Lakes region. The Interlake Steamship Company, Fincantieri Bay Shipbuilding and Bay Engineering are jointly designing the bulk carrier, complete with advanced vessel and unloading-systems automation. Scheduled for completion in mid-2022, it will generate business for partnering contractors, vendors and suppliers.