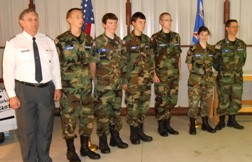 According to Squadron Commander First Lieutenant Gary Peterson, the senior members of the Door County Composite Squadron have been planning and training for the addition of a cadet squadron since early 2012. The squadron opened membership to cadets in April 2013 and began cadet training with the Fox Cities Composite Squadron during the summer.

The number one reason cadets join Civil Air Patrol is to fly. Door County Composite Squadron cadets will continue to celebrate their achievement with their first orientation flights scheduled in the next few weeks. For more information contact Peterson at 920.495.8415, Major Dave Fish at 920.493.2945 or visit gocivilairpatrol.com.