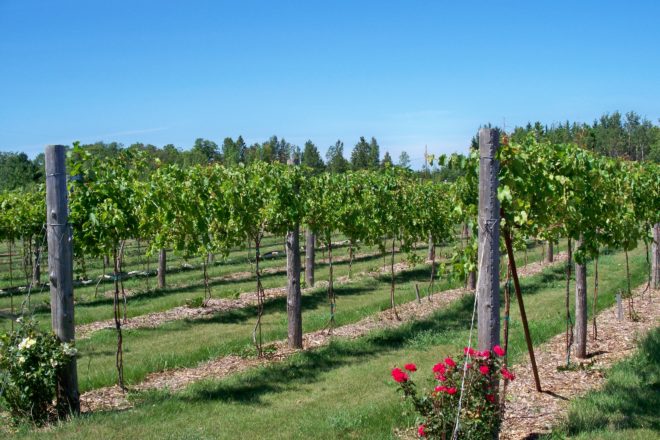 On Jan. 10, the night after the four-hour public hearing of the Door County Zoning Board of Adjustment that ended in favor of a new winery in the Town of Sevastopol, Don Grasse took the first step to establish a winery in Ellison Bay.

The Town of Liberty Grove Plan Commission approved a conditional use permit for Grasse and his wife Lynn to start a winery on their Ellison Bay property on Timberline Road.

“It will be just a wine-producing and bottling facility. I’m not looking to have a tasting room,” Grasse told the Pulse. “As a matter of fact it might be the state’s smallest winery.”

He intends to sell to restaurants and retail operations. “It’s going to be fairly small. Probably two to three hundred cases to start out with, if that much,” he said. “If I end up selling all of them and people still want the wine, then we’ll expand. But I don’t want to get over my skis, either.”

Grasse started what amounts to a two-acre vineyard 10 years ago, concentrating on the cold climate varieties developed by the University of Minnesota. 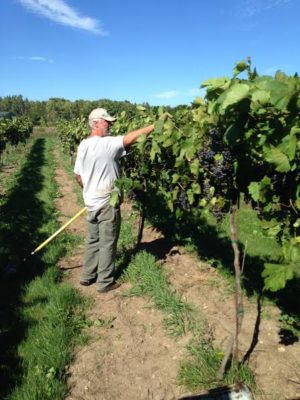 “I’ve been selling the grapes to Bob Lautenbach [founder of Orchard Country Winery in Fish Creek]. He’s been encouraging me to start a winery because I’ve been making wine all along,” Grasse said. “It was kind of a natural progression that we thought we could make and sell our wine in the area. I’ve taken last year’s wine to a number of places for their honest opinion and they’ve been real positive. That gives me confidence we can make it work here.”

It is, in fact, so early in the process that Grasse still needs to run the name he’s chosen for his wine through the legal process. Once he’s jumped through the various local, state and federal hoops, Grasse hopes a year from next fall’s harvest will see his brand available in retail locations.

He said his brother-in-law is next door with 20 acres, some of which will be developed for a vineyard this spring. He’d like to see even more people on the peninsula start growing grapes and really support the American Viticultural Area designation that Door County and other areas on the Niagara Escarpment earned in 2012.

“That was a big hurdle,” Grasse said of gaining the AVA designation. “Once you get that designation you can have that on your label.”

Like Steve Johnson of Parallel 44 and Door 44, Grasse hopes he is just the start of something bigger for the region.

“I was out in the Finger Lakes area in New York, a big wine area,” he said. “With all the wineries, it becomes a destination. They support each other. The more we have the better for everyone.”

Along with the cold climate grapes that he knows do well here, Grasse said he has also planted some marginal types in order to do some blending of grapes.

“I’m a believer in letting the grapes do the talking,” he said. “I’ll be doing some blending to smooth some things out. The grapes we grow up here, the cold climate grapes, have a tendency to be a little more acidic and some people don’t care for that that much. They’re used to drinking the California wines where you take a sip and it just kind of disappears.”

He plans to blend some less acidic grape varieties with the cold climate varieties for a smoother wine, however, he also wants to promote the varieties that do well here.

“You have to retrain your taste buds and open your mind a little bit to different varieties,” Grasse said.

The grapes he’s growing are not certified organic, but he uses organic techniques on the vines and grapes.

“I don’t use any pesticides or herbicides on any of my grapes at all. Everything is done organically,” he said. “We have a barn full of goats here, and all of that is used for fertilizer. About four or five years ago we visited some organic vineyards in California. They clued us in on some sprays and techniques rather than chemicals that most places use.”

While Grasse said he enjoys both the vineyard work and the winemaking, it all began for him with the vines.

“They’re really neat to work with,” he said. “The winters give me some sleepless nights here and there. It seems like there’s no consistency in the weather anymore. That’s hard on the plants.”

Grasse said he didn’t just wake up one morning and decide he should start his own winery.

“It just kind of kept pushing me that way,” he said. “I just kept moving in that direction. The more people that enjoy the wine that I produced, the more confident I got that that could be. You don’t really see all that much return for all the hard vineyard work until you produce the wine. I kind of felt that I’ve been pushed in this direction ever since I put in the first vine.”