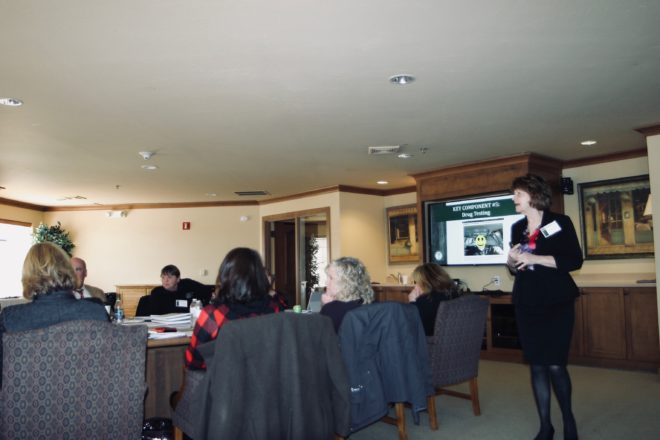 Ever since David Weber replaced retired Door County Circuit Court Judge Peter Diltz in 2016, Weber has been interested in bringing an Adult Drug Treatment Court to the county.

Now, he said, all the right people are in place to make it happen. He and the team that will be a part of the system took part in a three-day training session this week at Stone Harbor Resort in Sturgeon Bay. It was presented by members of the National Drug Court Institute (NDCI).

Before the training session, Judge Weber explained to the Peninsula Pulse why he has been such an advocate for this option.

“Right now what judges are supposed to do – our primary option that we’re supposed to favor when we sentence somebody – is to put them on probation,” he said. “Of course there are some exceptions – violent offenders, sex offenders. Those people almost routinely go straight to prison, but [in] a vast majority of other cases, we withhold sentence and put them on probation. They go to probation and are assigned an agent who assigns them various things to do and develops a plan for them. The level of supervision is relatively minimal.”

Weber said the lowest level of supervision for a minor offense is meeting with the corrections officer four times a year.

“Many people do well in that environment, and that’s great,” Weber said. “They do their probation and community service. They report to their agent and do all the things they are supposed to do. That’s fantastic. If everybody did that, we would have a great system, and we wouldn’t need to be talking about a treatment court.”

It is the subset of people who fail miserably on probation that treatment court is designed for. If their probation is rescinded, they return to court for sentencing, leaving Weber and his colleague, Judge D. Todd Ehlers, no choice but to send them to jail or prison.

“They get one chance, and we have no other tools in our bag but to put them in jail or prison,” Weber said. “The truth is that the vast majority of these people are drug addicted, or have a mental illness, or both.”

And although they may be sober during their incarceration, they do not get the tools to stay sober upon their release and fall into their old habits shortly after their release.

Weber said the drug treatment court is a way to “break the cycle” through intense supervision and support. The supervision includes daily contact with the drug court coordinator and a weekly appearance in court to see how they are doing.

“This is not a gloom-and-doom environment,” Weber said. “It’s supposed to be – and it is designed to be – a supportive thing. It’s a reinforcement. They are answerable to the court, but we try to give them positive reinforcement, not just reprimand them. Obviously, there are times when we have to sanction them when it’s needed. Many have never had positive reinforcement in their lives – ever. The idea is you develop a relationship with these people, all the while keeping objectivity. They get to a point where they don’t want to let you down.”

“It does work, and we do make a difference,” she said. “The role of the judge is incredibly important. The takeaway is that somebody in authority cares.”

Weber said certain conditions must be met to make a person eligible for drug treatment court: the individual must want to go through the program, must be addicted to a substance and have a high risk of re-offending, and must take responsibility for his or her crime by pleading guilty or no contest to the offense.

“This is not a diversion program,” Weber said. “It’s not a situation where they are going to do this in lieu of a penalty. Any treatment person will tell you that part of recovery is taking responsibility for your actions. It’s anything but an avenue for them to escape responsibility.”

Participants must also adhere to a rigorous and random schedule of urinalysis.

Weber said the drug treatment team plans to start a pilot program next year with perhaps five individuals going through treatment court –  funded, he hopes, with a federal grant from the NDCI.

“We’re thinking we can do that for between $50,000 and $100,000,” he said, adding that the funding pays for the coordinator’s salary and the extensive drug and alcohol testing.

In 2021, the county would apply for a five-year TAD (Treatment Alternatives and Diversion) grant from the state, which is specially designed for startup treatment courts.

“That would really get this up and running,” Weber said. “A full treatment court would be 15 to 20 people. What we’re trying to do is break the cycle for the right people. This is not a panacea. It’s not for everybody. Nobody’s suggesting it will cure the problem. It’s just one more tool to address the right people.”