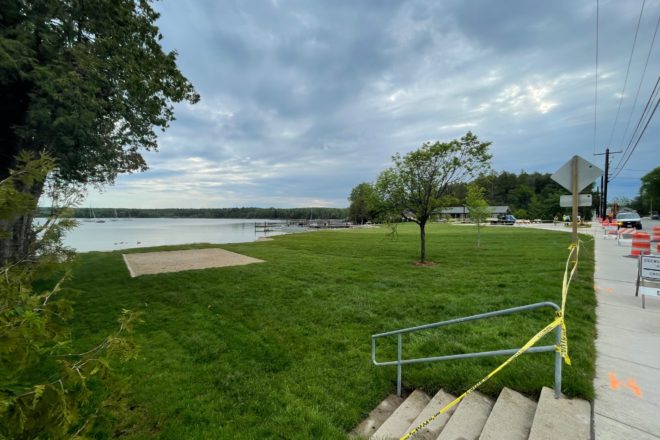 Improvements to Fish Creek Beach are nearing final form. The sod is down; a playground pad is in place; and the stone wall revetment has been completed, bringing the three-year project close to completion.

Work on the public, wheelchair-accessible pier is also underway. That pier will replace the crumbling dock that was there when the town purchased the property in 2016 for $1.4 million.

The town has encountered several hurdles and missteps throughout the project. Early plans placed the bathrooms and drop-off area closer to the highway and eastern edge of the property, but the day when construction was about to begin during the summer of 2019, town Chair Steve Sohns said the town board – under then-Chair Dick Skare – realized it had never applied for the variance needed to encroach on neighboring property lines.

“Rather than delay the project, in the heat of the moment they solved it by moving the building closer to the water,” Sohns said.

This summer’s work brought the grass surface up to the sidewalk grade and eliminated the slope between the bathrooms and drop-off area and the rest of the park.