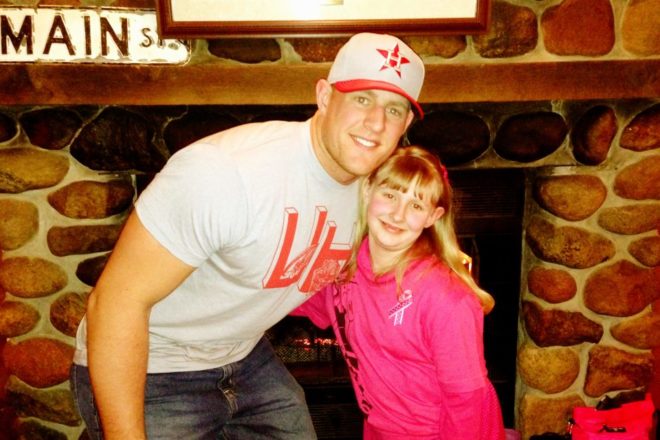 Part of the award for Newtown Kindness winners was a special experience specific to each kid. Ariana, a big football fan, got to have dinner with JJ Watt of the Wisconsin Badgers and Houston Texans. Submitted.

In the eight days between receiving an email from Lara Bush-Pensy about a “feel good story” and sitting down with her outside her office at Little Sweden Resort in Fish Creek, a gunman opened fire in a Florida school, killing 17 students and adults.

The act gave Bush-Pensy’s story new impact. The story was about hope and paying it forward following a similar tragedy:  the 2012 shooting at Sandy Hook Elementary School in Connecticut.

“When the tragedy at Sandy Hook happened, we didn’t know any of those people. We saw it on TV like the rest of the country,” Bush-Pensy said. “[Florida] does bring it all up, it brings it all up because I can’t imagine being in that position.”

It’s a position of a grieving parent who lost a child in a way that will forever feel senseless and forever unexplained. Bush-Pensy praises the strength and resilience of Charlotte Bacon’s parents, Joel and JoAnn Bacon, who lost their six-year-old at Sandy Hook that day. They have set Bush-Pensy and her daughter, Ariana, on a course of providing hope for those who face moments of defeat. 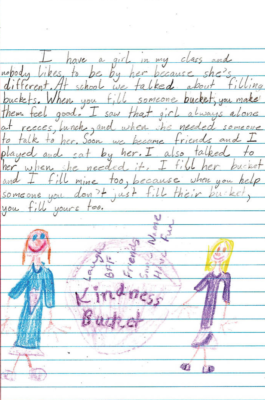 The letter Ariana sent as her application to the Newtown Kindness award. Submitted.

Bacon’s parents refused to let their daughter, who would have turned 12 on Feb. 22, be remembered only as a victim in a tragedy. They founded Newtown Kindness, an organization encouraging children to practice kindness. The organization’s first act was to gather submissions of children who do kind acts all across the country.

“[Ariana] took out her crayons and she wrote her story and drew a picture and said, ‘Send this to them’,” Bush-Pensy said.

Ariana, living with her mother in Janesville at the time in 2012, wrote of a girl at her school who was shunned by her classmates.

“I saw that girl always at recess, lunch, and when she needed someone to talk to her,” 8-year-old Ariana wrote. “Soon we became friends and I played and sat by her. I also talked to her when she needed it.”

Ariana dumped out her piggy bank for the five dollar donation and her mom sent it off. Out of hundreds of entrants, Ariana was one of the eight chosen to receive an award in Newtown a few months later.

Ariana’s award included dinner with JJ Watt, of the Wisconsin Badgers and Houston Texans, and some money dedicated to paying kindness forward. Ariana donated her amount to the Go Bo! Foundation.

The journey to Newtown – complete with a standard Midwestern blizzard, sprints through the Detroit airport and the uncommon kindness of people squeezed in the back of a delayed plane – set in motion relationships that have changed thousands of lives.

It started in 2013 with Bush-Pensy helping the Charlotte Helen Bacon Foundation with outreach. She found kids around the country deserving of the award and helped share their stories. Nicholas Lowinger was one of those kids.

Lowinger, a teenager from Rhode Island, started an organization to provide shoes to homeless youth after seeing a need while volunteering at local shelters with his mom. The organization, Gotta Have Sole, has given shoes to more than 68,000 kids with the help of big names such as Puma, Kohl’s and Reebok. 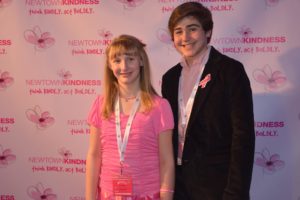 The organization’s growth gave Lowinger the opportunity to provide scholarships to college-bound students. After Bush-Pensy’s experience with the Charlotte Helen Bacon Foundation, Gotta Have Sole asked her to help get the word out about the scholarship opportunity. She shared the opportunity with Door County high schools, hoping to spread the message of kindness from the east coast to the local community.

“It’s just kind of neat how all those pieces connected over the years,” said Bush-Pensy. “How it all started was not a good thing but lots of good stuff came out of it.”

Still, Bush-Pensy wishes kindness could come without tragedy. A windfall of support for the victims and other calls to action are sure to follow in the aftermath of the Florida shooting, but Bush-Pensy and Ariana are focused on the small things they can do in the community to encourage kindness everywhere.

“I think every time something like that happens it’s heartbreaking, gut wrenching, and you want to see something change,” Bush-Pensy said. “Wherever we can, we pay it forward or do something that just keeps that chain of kindness, those good acts going. Sometimes it’s just little things.”

For more information on the scholarships provided through Gotta Have Sole, visit gottahavesole.org/news/scholarships.