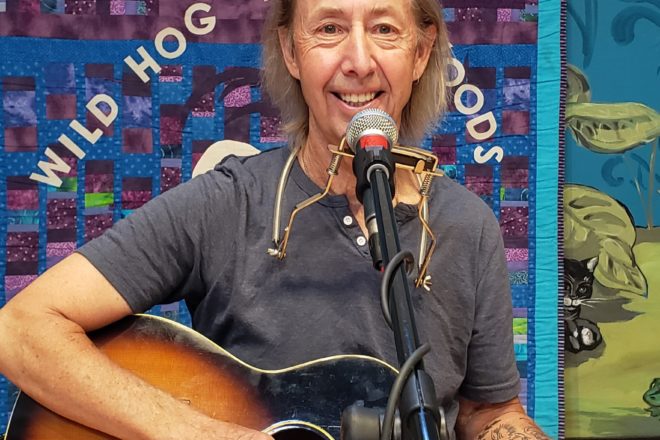 At the beginning of 2020, Terry Murphy and his band, The Cherry Pickers, had a full summer and fall touring schedule – roughly 30 shows booked – and if that wasn’t enough, he had embarked on producing a solo album at the same time. When the pandemic suddenly caused all of those performances to vanish, Murphy found a silver lining in decreased traveling time and increased studio time in Madison to complete his latest album, My Better Days. Murphy began his musical career in Door County playing the open mic at The Bayside during family summer vacations in the early ’90s. He was a regular at Northern Sky Theater (then called American Folklore Theatre), where he met David Alley, who is now Northern Sky’s technical director. Alley became Murphy’s musical collaborator on his second album, Kickin’ the Dream, released in 2014; and again on his 2016 solo project, Curious Water. On Kickin’ the Dream, Murphy worked with many stalwarts of the Door County music community, including Eric Lewis, Paul Sowinski, Rich Higdon, Lynn Gudmundson and Claudia Russell.

Since buying a home in Door County in 2012, Murphy has worked with Pete
Evans as a duo and performed in the band Last Man Standing, and in 2017, he put together The Cherry Pickers. He’s also been part of the Exposure to Creativity Program at Gibraltar High School, helping students navigate the songwriting and recording process.

Vanessa McGowan talked to Murphy about his music, what he’s been up to
lately and the exciting projects he’s working on.

Vanessa McGowan (VM): Who or what first got you into music?
Terry Murphy (TM): The short answer is The Beatles’ performance on The
Ed Sullivan Show in 1964, but the truth comes from watching local rock ’n’ roll bands as a kid on stage at church festivals. Another spark came from listening to the radio at night and imagining myself singing that song. I bought a guitar when I was 12 and got a few lessons from one of those high school rockers, learned “Wild Thing,” and the rest is history. I was smitten with live music and still am.
(VM): How would you describe the music you make?
(TM): As a songwriter, it depends on many variables, from mood to purpose. Some songs are meant to be light-hearted and entertaining, while others ask questions or offer lyrical images or experiences for others to connect with. Musically, I’m eclectic by nature, influenced by literally all forms of world music. In short, I subscribe to the Paul Simon quote, “I play what’s musically pleasing.” Recently I’ve discovered the fun of playing electric guitar, which certainly contributed to my most recent recording, a blues-influenced project.
(VM): If you could open a show for anyone, who would it be?
(TM): That’s a toughie. Maybe John Hiatt, Stephen Stills, Bonnie Raitt or Keb’ Mo’.
(VM): When you’re not making music, what’s your day job?
(TM): Well, currently my wife and I follow a pretty simple routine of jumping in the woods at Pen Park; walking our golden retriever, Yogi; reading any number of books; traveling to Madison to see grandkids; and just laying low till the coast is clear. Booking The Cherry Pickers for the summer of 2021 and promoting my new record, My Better Days, promises to keep me busy. Speaking for all musicians, we look forward to some form of regularity, when we can rehearse and plan for shows again.
(VM): What have you missed most with the lack of gigs in 2020?

(TM): The people who I play with, for and around. The interaction, set lists,
nerves, weather checks, new arrangements and material. Watching the sun go down at Fred and Fuzzy’s.
(VM): What exciting projects do you have on the horizon?
(TM): Making music and selling music are drastically different skill sets.
Despite the obvious challenges of social distancing, creative human collaboration carries on, adapting and resilient, putting forth a best version and more. Fortunately, [I’m] surrounded by talented musicians, artists and sound engineers, [and] the My Better Days project needs to be shared with the world. While the project was made in Madison with Steve and Bill Roberts, DoCo musicians Cathy Grier, John and Kris Lewis helped out with tasty vocal harmonies.

Find out more about Terry Murphy’s music and buy his latest CD at
terrymurphymusic.com.