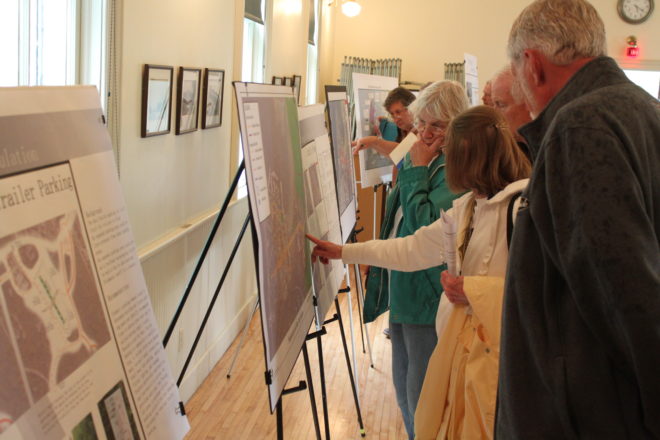 At an open house in the Old Gibraltar Town Hall, the planners of Short Elliott Hendrickson Inc. (SEH) presented the conceptual plans for Fish Creek’s waterfront plan following recommendations taken at a charrette (a meeting of stakeholders to resolve conflicts) in the fall of 2015. The resounding theme during the presentation consisted of tweaks and maintenance rather than a complete overhaul.

“The biggest thing we heard when we kicked off this project is that we love our community, we don’t want to see any radical changes,” said planner Andrew Dane.

Among the most radical of proposed changes, as determined by the response of attendees, are one-way streets and increased parking. The planners from SEH recommended further study of the two topics before any action is taken.

“One of our recommendations is to do a little more study to determine existing and future parking needs,” said Dane. “You do some counts, talk to downtown businesses. The parking has become such a big issue in this process we thought we need a bit more study on that.”

Dane determined that repainting the parking lines throughout downtown Fish Creek would gain a few spots, while rerouting Spruce Street and Cottage Row to one-way roads could result in more than 25 new parking spots.

But some attendees felt the parking need was being overblown.

“Do we have a sense for how much we need? We’ve talked about incrementally we can add spaces but how many spaces for the level of seasonality that we have, for the amount of people in the summer. How much is enough?” said a man in the audience.

Gregg Calpino of SEH explained there are many different types of parking users. Some will prefer to park right in front of where they are going, others will be happy to walk a mile from their car to their destination. Calpino said the town should seek to support all of these user groups.

A traffic flow study, at an estimated $5,000 to $10,000, and another study on the users of the boat launch on the west side of Clark Park will further the data needed to pursue any real changes.

The Wisconsin Department of Natural Resources (DNR) awarded the town around $58,000 as a coastal management grant to begin development of a watershed management plan around Fish Creek, which was likely responsible for the 2015 beach closures at the municipal beach. The funds will become available in July and can also be used to develop a new design for the town beach.

Dane hopes to present the final plan to the Waterfront Steering Committee in July with adoption of the plan by the town board by August. To see the latest updates on the plan, visit fishcreekmasterplan.com.