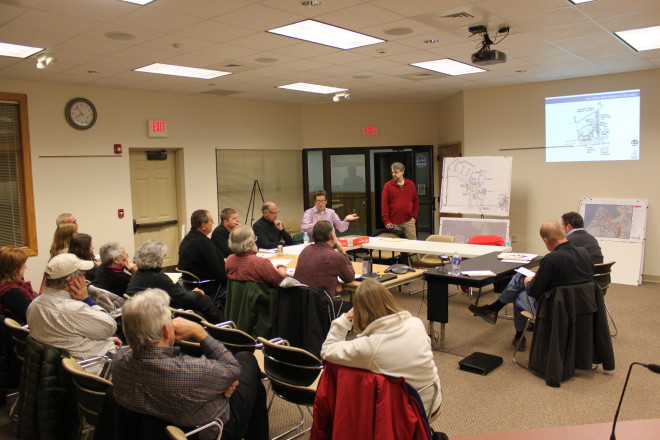 Congested, crowded, quaint. Those are the three words the residents, tourists and business owners think best describes Fish Creek, according to a survey from the planning company charged with the Fish Creek waterfront redevelopment project. Short Elliott Hendrickson (SEH) will use the data from the survey to move forward on recommendations to improve Fish Creek’s waterfront.

At a meeting of the Town of Gibraltar’s Waterfront Redevelopment Steering Committee, SEH presented the data and their drawings since the project began in October.

“The big areas we focused on were the town beach, marina, harbor and launches,” said Andrew Dane of SEH. These areas show a priority to the management of the tourist season, and making movement around the town smoother.

“I would say every program we’ve considered in this study, you don’t have a lot of room to put cars in Fish Creek,” said Gregg Calpino, Regional Practice Center Leader of SEH. “We just have to be more mindful of that in the future.”

Calpino explained the concept of stacked streets, or adding too many amenities to an area that doesn’t have enough parking spots. This idea was brought up when discussing changes to the marina.

The marina is one of the main revenue drivers for the Town of Gibraltar so the town hopes to capitalize on that by looking for more spots to put boats. The town is unsure whether there will be added slips, longer docks or more places to moor boats. Calpino said that simply by making better use of the available space, the marina can have more boat slips.

“In the workshop we looked at parking for the whole town and came to the ‘A-ha!’ moment that there’s a lot of parallel spaces that are painted too big and if you went through and got them all the right size, you gain a bunch of spaces,” said Calpino. “That same approach, probably in a smaller scale, could also happen here if you started to go for some smaller slips, some bigger slips, you might gain three to five.”

While the town is not obligated to move on any of the recommendations, the aging marina is due for repair or replacement. Calpino thinks the required updates would be a good time to explore these changes.

But David Harris, chair of the Harbor Commission, thinks that adding slips before parking is putting the cart before the horse.

“A larger expansion is really tied to us figuring out our parking problem,” said Harris. “We have 24 parking spots for 100 moorings and slips right now.”

In the survey, 62 percent of Gibraltar residents responded that they go to other towns and villages for a waterfront experience, citing parking and congestion for abandoning their own town. Eighty-three percent of boaters that use the marina in Fish Creek do not use those 24 spots designated for boating.

But the issue of parking is less than seasonal, only posing an issue during weekends during the peak two months of summer: July and August. This fact makes the desire to add more area for parking spots undesirable.

When discussing the beach parking lot, Calpino said, “In summer it’s never enough, in offseason it’s plenty. You don’t need as much parking as you have there.”

SEH looked to create more spots without laying down more asphalt. They can do this by creating a one-way street in a loop along Spruce Road toward Alibi docks.

“We have a nice community and then it really doesn’t fit in with the character of the community,” said town board member Brian Hackbarth about the portable toilets placed at Fish Creek beach.

Different setbacks from the highway, high water mark and adjacent properties make the process of getting permanent bathrooms difficult. But in discussions with different regulatory bodies, Dane said that it might not be as big of an issue as they previously thought. The current challenges are in the new state budget.

“There’s a regulatory landscape that has kind of changed in the last state budget. We’re still working through the zoning issues so there’s some gray in terms of the regulatory climate,” said Dane.

Calpino said that in addition to bathrooms, water quality was a priority for any changes to the beach. The storm water drain running along the west side of the beach property is unsightly and could be more environmentally friendly if the runoff was in the open air.

“We kind of looked at daylighting as an ecological feature,” said Calpino, stating the aesthetic, educational and environmental benefits that would come from aerating the water before it hits the bay.

Things will quiet down at the SEH office through the winter, but the group will return in the spring to continue developing a set of recommendations. The town can then pick and choose what they believe will do the most good at the Fish Creek waterfront.