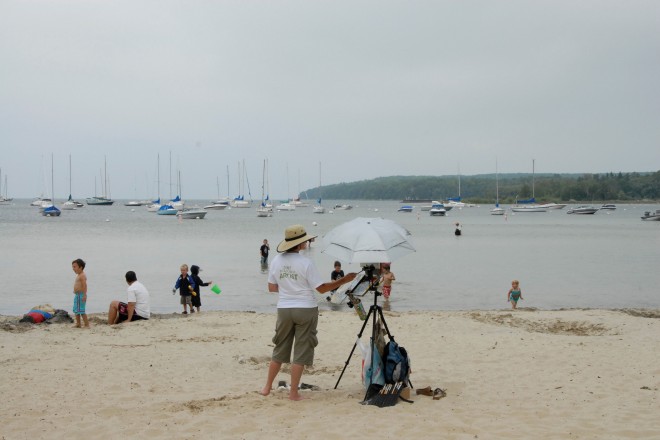 A new idea floated by the Harbor Commission would link the Fish Creek Beach with marina facilities in the center of the village. Photo by Dan Eggert.

A Waterfront Master Plan is in the works for Fish Creek with the goal of redeveloping public water access areas. The plan will focus on the town docks, boat launches and the public beach with a long-term design to be developed over the next year.

Although separate from the planned highway resurfacing slated for the winter of 2016-17, the projects will look at overlapping issues such as parking, public facilities and trail connections. Throughout the project, focus will be on improving the use of the waterfront without changing the aesthetic of the area. 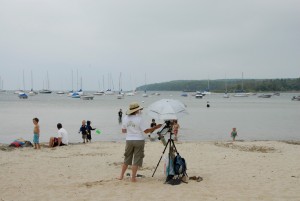 A new idea floated by the Harbor Commission would link the Fish Creek Beach with marina facilities in the center of the village. Photo by Dan Eggert.

“I think that we are all very cognizant that the Fish Creek harbor is really a draw and I certainly don’t want to see it get expanded to the point where nobody wants to be there anymore,” said David Harris, chair of the Harbor Commission.

A 10-person Steering Committee will lead the discussion on the project that will take place during the next year. The process includes public input at workshops in the fall and spring as well as a survey of residents and business owners. The committee is comprised of members from the Gibraltar Town Board and Harbor Commission.

To begin the process, the Town of Gibraltar hired Short Elliott Hendrickson Inc. (SEH), an engineering group based in Minnesota, to consult on the new design. SEH is working on the highway resurfacing project in Fish Creek and Harris saw that as an opportunity for them to look at the harbor as well.

The firm delivered a map to the committee earlier this month highlighting problem areas and pitching ideas for improvements. The map included ideas on what to do with the east boat launch near the town dock’s main office. Parking and congestion at the launch is a recurring conversation for Harris and the Harbor Commission.

“The east boat ramp is just terrible. It’s a dead end,” said Harris. “You end up with trailers in there and they can’t turn around and it’s just a mess. One of the ideas was abandoning that ramp so we don’t have those congestion issues and perhaps expanding the west ramp.”

The map submitted by SEH also includes a big orange arrow pointing between Fish Creek beach and the town dock, indicating the town’s desire to link these two public assets. While a boardwalk connecting the two areas may be far in the future, it is still in the minds of the developers.

The town took a small step toward this goal in purchasing a gravel parking lot near the east boat launch. Moving forward, the town would need to begin talks with the six private lots that line the water between the dock and the beach.

Despite the price tag that will accompany the upcoming changes, Harris stated there is no intention to sacrifice the aesthetic of the harbor for increased revenue at the dock.

“It has nothing to do with making money. It has to do with the best use of the harbor,” said Harris. “I wouldn’t support anything that did change the aesthetic and feel of the harbor.”

There will be a public workshop on Oct. 19 and 20 that will include a walking tour of the waterfront area, design sketches for public review and a community input session.