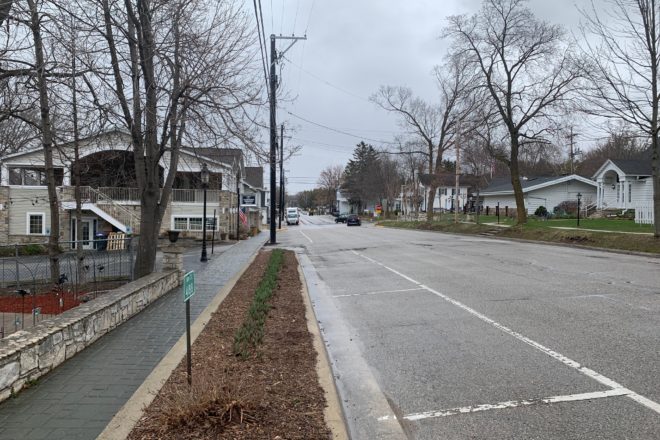 The town hopes to correct the slope on Main Street when it’s reconstructed. Photo by Myles Dannhausen Jr.

Residents in the Town of Gibraltar have pushed back on plans to overhaul Fish Creek’s old downtown area.

The picturesque area surrounding Founder’s Square – defined by stores housed in small cottages, along with historical inns such as Whistling Swan and the White Gull Inn – is one reason why Fish Creek has appeared on lists of Wisconsin’s most charming, most walkable and best small towns. Residents balked at initial plans from Cedar Corporation that called for 10-foot sidewalks and removing dozens of trees that provide a canopy along Main Street and the side streets of Spruce Street, Cottage Row and Cedar Court.

“The initial plans were horrifying to everybody,” said Meredith Coulson-Kanter, owner of the White Gull Inn. “Fish Creek Civic Association sent a letter of concern about making everything a concrete jungle, taking away trees. Basically, we said what we do on Main Street doesn’t need to be done on every side street in town.”

Coulson-Kanter was referring to the 2019 reconstruction of Highway 42 that removed the strip of marigolds and green spaces in favor of wider sidewalks, and replaced wooden power poles with taller, black power poles.

Several business owners and residents who were reached for this story agreed the streets need to be replaced in the old downtown, and they agreed with the need to address stormwater-management problems, particularly along Cedar Court. That’s where the project began, said Town Administrator Travis Thyssen.

“The road is in terrible shape, and the drainage is really bad there,” Thyssen said. “We started there and then did a full survey of the area and came up with a plan that was the maximum we could do with roads and sidewalks, with the idea we would scale back from there.”

Laurie Buske, director of the Gibraltar Historical Association, agreed that sidewalks need to be addressed along Main Street, but she didn’t agree that fixing them requires more than doubling the width.

“I’d like to see it be done without taking down trees,” Buske said.

Thyssen said the initial idea was to widen the sidewalk to accommodate a lot of foot traffic. That plan called for expanding the sidewalk from four feet to 10 feet: the same width as the wide section of sidewalk in front of Blue Horse Beach Cafe in the center of town. Business owners in the area – long considered to be one of the most walkable areas of northern Door County – balked at the plan that would have removed many large, mature trees.

Thyssen said the plan will likely be scaled back to six- or seven-foot sidewalks. It also called for sidewalks on both sides of Cottage Row, Cedar Court and Spruce Street.

“The general feeling from people seems to want the curb and gutter and sidewalks on Main Street, and get more rural as you go toward the water and Cottage Row,” Coulson-Kanter said.

The town has also scaled back plans for Sunset Park. Those initially called for removing trees for parking and trucks, and adding curb and gutter to the park at the end of Main Street used primarily by people catching the sunset.

Cottage Row is also in the midst of a facelift, but it’s not limited to roads. Most of the summer cottages that gave the road its name have been replaced by massive homes, and several more construction projects are underway, clogging the road with workers’ vehicles and large trucks delivering materials to job sites. That has accelerated the deterioration of the long-neglected road.

This spring, the Town of Gibraltar and Wisconsin Public Service removed dozens of cedar trees along the road in preparation for road widening and to protect power lines. The road will be reconstructed this summer, with work beginning after July 5, and a targeted completion date of Labor Day.

The work will include installing a turnaround at the bottom of the hairpin turn on the south end of the shoreline stretch of the road. Thyssen said the turnaround comes at an estimated cost of $70,000 and will address issues with large trucks accessing the road.

“We have construction trucks constantly down there that are starting on Main Street and backing down that road because they can’t go up the hairpin and can’t turn around at the end,” he said.

Thyssen said it takes a full minute for fire trucks to turn around, and school buses don’t pick up riders along the road because the buses can’t turn around.