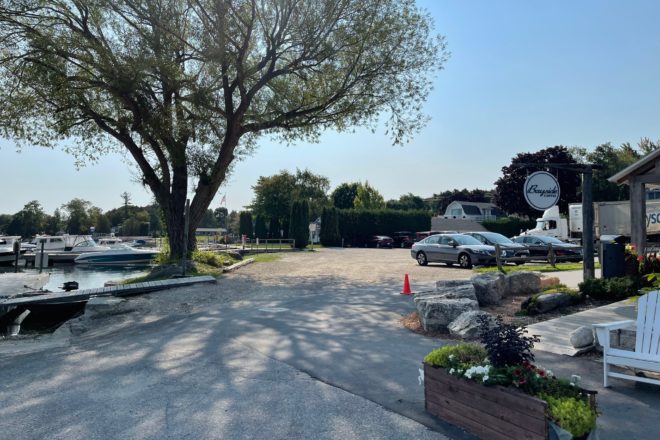 This parking lot in downtown Fish Creek, owned by the Town of Gibraltar, was opened to the general public last week. Photo by D.A. Fitzgerald.

Only permit parking had been allowed during the past season, which created an empty parking lot and many complaints from business owners and residents who had once used the waterfront lot when shopping or kayaking. Not even those who were grabbing a quick cup of coffee at Bayside Coffee, located at the lot’s entrance, were allowed to park there.

“We are residents, and that needs to be a parking lot for all of us,” said one local woman who spoke during the Gibraltar Town Board’s Aug. 3 meeting.

A month later, during its Sept. 7 meeting, the board unanimously lifted the permit-parking restrictions on the gravel lot, following an Aug. 17 recommendation from the Gibraltar Harbor Commission.

The town purchased the lot for $565,000 in 2015 from the Diocese of Green Bay, which would park 60 vehicles bumper to bumper during weekend retreats at the former Holy Name Retreat House on Chambers Island. The town didn’t necessarily open the lot to public parking after purchasing it, but neither did it restrict public parking.

“There was not strong governance,” said Town Administrator Travis Thyssen.

But this year, there was. Following town directives and the staking of posted signs that restricted parking, Gibraltar Police Chief Ryan Roesch ticketed those who parked there without a permit. The enforced restrictions came after the town purchased the lot’s neighboring land from Barb McKesson (née Kinsey) for $3.5 million. The 0.46-acre parcel included the Holiday Harbor Waterfront Cottages, with five piers and 28 additional boat slips for the neighboring town dock.

Absent a plan for that property, and with more boater and boater-turnaround parking needed, the town closed the lot to the general public.

“Just a year of sorting things out,” Thyssen said.

The town learned during the sorting-out year that there was a “significant public interest” for public parking at the lot, Thyssen said – and thus, the town’s decision to reopen it.

The board indicated this may not be a permanent situation as it begins discussing plans for the adjacent property.

“This winter we’ll talk about whether that will even be a parking lot anymore,” said Gibraltar Town Board chair Steve Sohns. “It could be a park.”