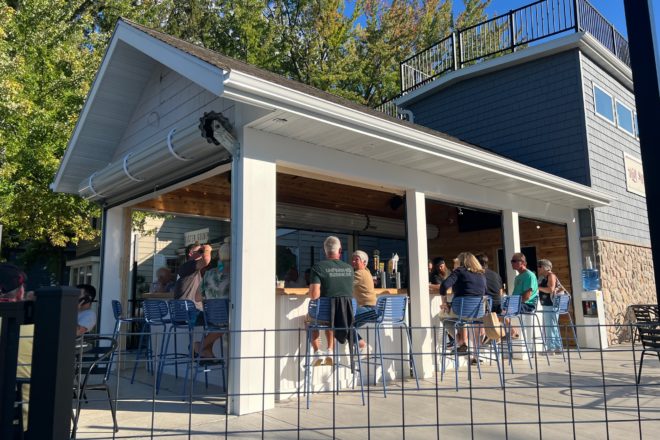 After a season of sitting vacant, there’s a bustle of activity again on the corner of Hill Street and Main Street in Fish Creek. And although fall isn’t the time when most new restaurants in Door County host their ribbon-cutting ceremony, the timing feels perfect for owners Scott and Karin Watts, who hope their latest venture, Hill Street, fills a gap in the local dining scene for residents as much as visitors.

“We’re not trying to be anything fancy,” Scott said. “We have your basic cheeseburger, but then we also have this pork sandwich from the noodle bar.”

The noodle bar he’s referring to is the one-season-wonder, cash-only “noodles and booze” bar that occupied the former location of Fish Creek Grill last summer. (The building has since been razed to make way for Phase II plans of Door Community Auditorium’s Annex project.) According to Scott, Hill Street promises to bring back some of the popular dishes from the noodle bar – with a twist – as well as other elements of Asian cuisine, classic pub staples and a full bar.

Outside, cafe-style tables and another full bar continue the tradition of al fresco dining that the locale’s predecessors – Stillwaters by the Bay and Taco Cerveza – had offered.

Although both Karin and Scott have previous restaurant-industry experience, this will be the first time they have worked together as restaurateurs. The process of opening a restaurant together, Karin said, is a lot like a marriage.

“You know who’s better at this and who is better at that, and so you naturally align those skills with what needs to be done,” she said.

Both have worked in the back of house, but Karin also had skills in front-of-house and business management.

“Doing the bookkeeping definitely seemed to fall more into my wheelhouse,” Karin said. “Scott, with how passionate he is about food, was the driver when it came to creating the menu.”

The inspiration for the menu comes from a variety of sources, including their extensive home cookbook collection, but the couple’s love of travel also definitely plays into the selections.

“For me, personally, when I travel, I don’t care about the sights. It’s all about the food,” Scott said. “Karin’s a little less that way, but we still like to go out and eat and explore new places.”

Other menu items are complete collaborations, with the line between one person’s idea and the other’s blurred.

“Sometimes it’s hard to know where her idea ended and my idea began,” Scott said. “And that’s been really fun in several aspects. Some of the best stuff on the menu, in my opinion, has come from collaboration. She’ll have this really good idea for a salad, so we’ll make it and try it, and it’s really good. Then that leads to, ‘Oh, what if we tried this?’”

Perhaps the best news about the menu is its late-night availability.

“The plan is to have the outdoor area open until 10 pm and indoors until bar time,” Karin said.

Currently, the only other late-night option in Fish Creek is the Bayside Tavern. She said they have a good working relationship with their neighbor and, together, hope to bring back the vibrant, late-night dining scene that Fish Creek once had.

“I love Fish Creek. I grew up here,” Karin said. “It’s the cutest town. It’s the most walkable. It’s got charm. Being young business owners who live here, we’re super excited to bring a type of dining experience that isn’t here to the town that we love.”