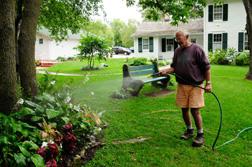 Dr. Rudy “Bud” Barta, a retired neonatologist, pays a debt of gratitude by volunteering his time to maintain the gardens of the Noble House in Fish Creek. Photo by Dan Eggert.

Another once successful man now on the skids? Hardly!

“I am not a Master Gardener, but I always considered gardening an extension of pediatrics and neonatology,” said Dr. Barta, known as Bud to his friends. Neonatology is a specialization dealing with high-risk pregnancies and newborn babies who may struggle for life. “You provide oxygen and fluids and nutrition, a proper environment, and most things that grow in a garden do well, just like in a nursery.”

Barta experienced a major health issue 10 years ago and changed his life’s focus. He retired from his position at Baylor, and though he continues to live in Dallas in the winter, he has spent the last 15 summers living in Baileys Harbor near the Cana Island Lighthouse. Here, he has found a second career as a volunteer gardener. On hot summer days he can be found hunched over the flowerbeds of the Noble House or the Door Community Auditorium in Fish Creek, tirelessly weeding and trimming the gardens. He started flower gardens at Cana Island and Birch Creek as well.

He gets and solicits help from around the community. “A lot of people help me with donations of plants and by giving me ideas,” he said. “Bridenhagen Tree and Landscape, Jerry’s Flowers, Green Side Up, Sunnypoint Gardens.”

I talked with Dr. Barta at the Blue Horse Bistro in Fish Creek, where he arrived dressed in t-shirt, shorts, and work boots, ready to cross the street to the Noble House and pull weeds once the conversation had ended.

That historical property is only one connection that links the Dallas neonatologist to Door County. 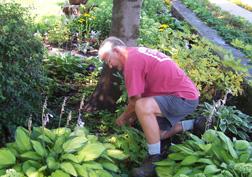 Barta was born in Cleveland to a mother who was a gardener. In high school he took a horticulture class, in part because his girlfriend was in the class.

A graduate of the College of Wooster, Barta began his pediatric studies at Case Western Reserve, then finished his training at the University of Wisconsin.

His connection to the Noble House is born of a debt of gratitude. Dr. Gertrude Howe, a pediatrician related to the early settlers of Fish Creek, once owned the prominent home at the bottom of the hill entering the village.

“She helped find funding for my training to be a neonatologist through the Maternal and Child Health Department of Wisconsin.” He was bored with the “red ears, throats, and colds” of routine pediatric care, and after becoming a neonatologist, “traveled about the state doing teaching with her.”

After moving to Texas, Barta lost track of Dr. Howe, until he came back to Fish Creek and found that she had retired and moved into the Noble House. After she passed away, Barta saw an ad in the local newspaper looking for volunteers to help with the grounds of the historic home.

“I felt I owed her a debt of gratitude,” he said, a debt he continues to repay through his gardening.

Twelve years ago Barta began working at the Fish Creek Market. In a conversation with the owners he had made small-world connections and was offered a job. “I had never worked at a store in my life!” he said. “It became a social thing. I got to know a lot of people.” His pay was considerably less than he had been making as a physician, but he found the work to be fun, coming in for a half day every Sunday morning, seeing old friends, and making new ones.

Many of those people enjoy hearing Barta’s stories of an eventful life. When President John F. Kennedy was assassinated in Dallas in 1963, Barta was Medical Officer of the Day at the Ernest Harmon Air Force Base in Newfoundland, Canada. Thousands of miles from Dallas, “Pilots slept in their planes on the runways,” he recalled, “ready to go in case there was an international conspiracy” behind the shooting.

Years later he experienced a more direct connection to a President, this time as one of three neonatologists who took care of President George W. Bush’s twin girls after their birth.

“Bush was a wet-behind-the-ears boy that came from West Texas with Laura [Bush], referred to Baylor because she had some problems with her pregnancy,” he recalled. She delivered five weeks early, but the babies were good sized and did well.

Bush’s dad was Vice President at the time, and he had a Secret Service detail that made for an interesting delivery room scene. The agents wore lab coats and carried weapons, “just in case.”

But one of Barta’s favorite medical stories involves people much less famous. “My daughter was born 2 pounds, 7 ounces, just after we moved to Dallas,” Barta said. Her mother was just 27 1/2 weeks into pregnancy, and when she was born, Barta was the only doctor there. “I resuscitated her, did all the lifesaving things, and two hours later the other neonatologist showed up!”

His daughter required heart surgery, a respirator, and 60 days in the hospital. Sara, now 31, is married and doing physical fitness work with residents of a retirement home in Dallas.

Not all of his stories deal with medicine, however. Barta is a self-described “baseball nut” whose childhood hero was Cleveland Indians shortstop Lou Boudreau. Barta was good at the game too, playing the sport through college and into the semi-pro level as “a weak-armed second baseman.”

He grew up in the same neighborhood where Bill Wamby, who made the only unassisted triple play in a World Series game (one of Barta’s favorite baseball trivia questions), owned a house. Wamby rented it to Cleveland players through the years, and young Barta would get to know them.

At Wooster Barta’s team played an exhibition game against a high school team featuring future Major Leaguer Dean Chance, who struck out him and all his college mates.

“I remember hearing the ball,” Barta said, “but never saw it, he threw so fast!”

“I put WEEDGY on my truck license plate when I started gardening up here,” Barta said, “and people asked if I raised and sold marijuana! No, I told them, but I pull a hell of a lot of weeds!”

But he gets no puzzled questions about his gardens. “I love pulling weeds,” Barta said, “to make gardens look better. I haven’t met a weed I like. I like talking to my flowers, but I get mad at the weeds. And sometimes I get mad at the flowers when they don’t do what I want them to! My wife will say, ‘Who are you talking to?’ I’m talking to the flowers!”

Dr. Barta, MD, pulls weeds in public gardens around Northern Door, but he also plants seeds of inspiration for those of us who want more fulfilling retirements than sitting on front porch rocking chairs.