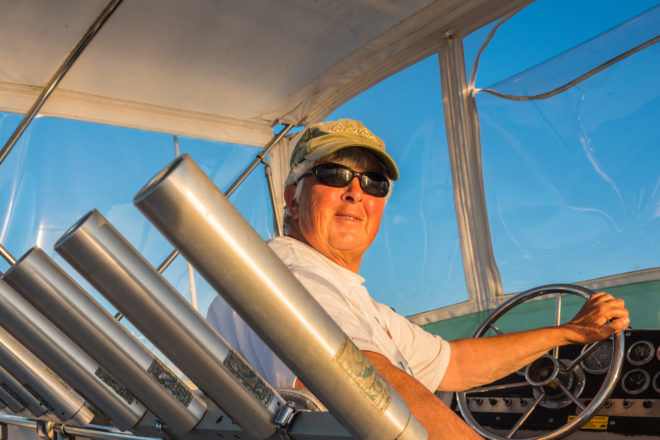 Lynn Frederick and her younger sister, Laurie, grew up on the family farm on Fox Lake. Lynn isn’t sure how old she was when she first went fishing with her parents, but her fascination with fish began very early. She has a picture of herself at age three, holding up a bullhead. (Laurie always preferred gardening.) 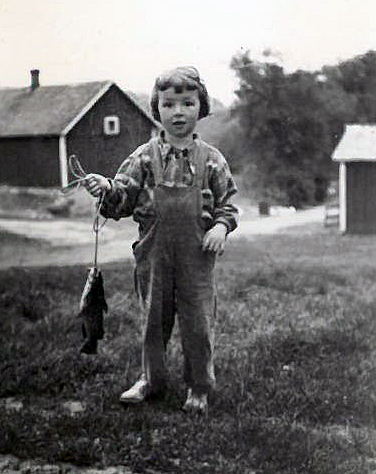 A young Lynn Frederick with her first catch. Submitted

She first came to Door County in the ’70s to work on her thesis on whitefish and also cooked at Wagon Trail Resort when it was a family buffet owned by Leonard and Alice Peterson. The question as to when she’d had time to learn to cook brought on hearty laughter. “Right there,” she says. “I just did whatever Alice told me to.”

Her next job was crewing for John Eriksson, who ran a charter business with a 28-foot Wood Carver out of the Baileys Harbor Yacht Club. “I didn’t make much money,” she says, “but it was a lot more fun than working in a restaurant.”

By the late ’70s, when she was working as a field agent for the University of Wisconsin’s Sea Grant Institute, applying research to practical problems on the Great Lakes and identifying problems that needed solving, Lynn felt secure enough to start her own charter company, Lynn’s Charter Fishing. Her boat, the same kind she worked on with Eriksson, was named The Fish Doctor. Now her own boss, she found that a wooden boat took too much time for upkeep.

By the ’80s she switched to a 20-foot Bertram that used less gas, enabling her to go farther out to deeper water. This was especially important at that time, as there was a shortage of salmon, and for a few years Lynn changed to rainbow trout, which seek colder water at deeper depths.

“Also, when you’re going farther out, it’s better to have two engines,” she said.

Now she fishes for salmon and trout, carrying a first mate, usually a college boy, and a maximum of six passengers. Lynn runs the boat, while the first mate helps customers set the lines, then goes to the fly bridge, where he can see all the activity.

“It’s easier to teach the mate to fish,” she says, “than to teach them where to find the fish.”

Usually, the season begins with mostly rainbow trout, then switches to a mixture that includes Chinook salmon. Since salmon feed primarily on alewives, their availability depends on where the alewives show up.

Lynn usually starts trolling in 80 feet of water, about three miles from the yacht club dock. She trolls out to a depth of 250 feet, seven or eight miles out, then back to 80 feet. How far out they go depends on water temperature, wind direction and where the fish are feeding. In early summer, they can start trolling right inside the harbor. Lynn has always preferred fishing in Lake Michigan, because fish prefer colder water.

“You have to go pretty far north in Green Bay to get that water temperature,” she says. 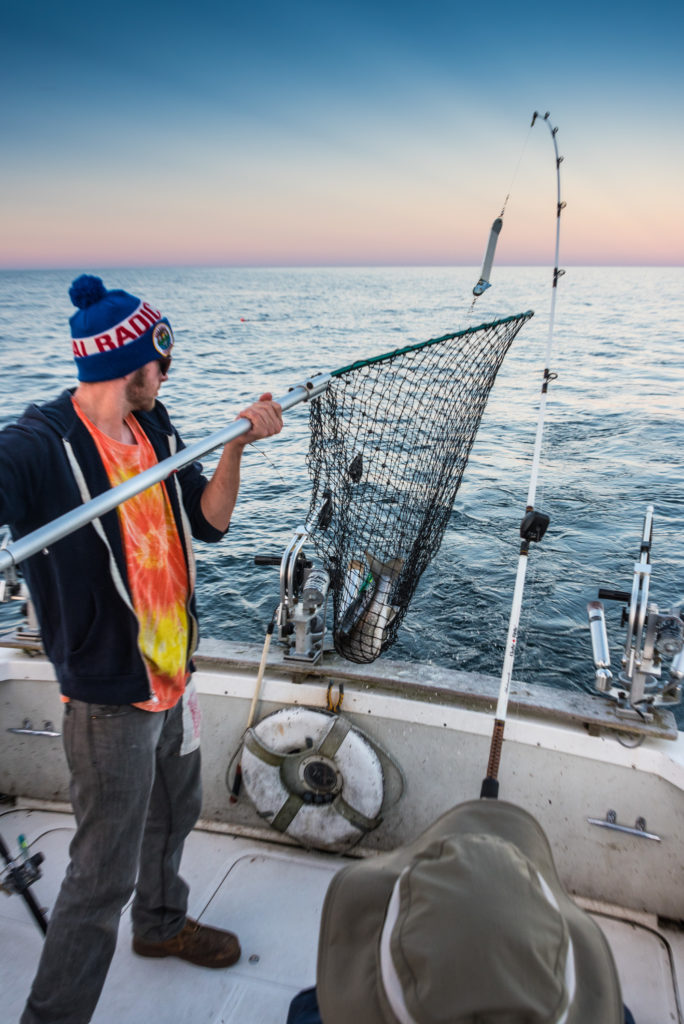 Her busiest season is mid-June through August. Most charters are five hours, but she’ll run three-hour trips for families with children. She will combine parties to make up a group of six. With a mixed group, everyone chooses a rod to begin the trip, then they are rotated.

“I try to do the best for all my customers,” Lynn says. “If everyone gets four or five fish, it’s a lucky day. I always hope each person gets at least one or two.”

She hopes for at least 25 percent new customers each year, but the majority are repeat business or referrals. Recently a man told her, “It’s good to know you’re still around. I took my daughter on her first charter with you 25 years ago.”

Lynn has “been around,” in fact, for four decades. She has no plan to stop chartering, but doesn’t often do two a day anymore. She’s never been one to sit around. A number of years ago, she took classes to become a registered nurse in the off-season. She worked regular shifts at St. Vincent’s in Green Bay and Scandia Village in Sister Bay to pay for insurance. Now that she has a bit of free time, she’s enjoying photography, even selling some prints occasionally.

Two stories she recalls from 40 years on the water: “I tell customers not to set the hook because the boat is always moving. But it’s very hard to convince walleye fishermen. One fellow set his hook so hard his rod broke into three pieces. Fortunately, three people grabbed the pieces and saved the fish.

“In the salmon tournament two years ago, a fellow caught a 26-pounder. The winner was 28 pounds. Twenty-six pounds would have placed high, but the fisherman had no ticket. It happens every year. I didn’t push it on that trip because it was a combination of groups.”

When Lynn began chartering, it was a very unusual career for a woman. There used to be one in Manitowoc, and she believes there’s still one in Milwaukee. At one time the late Jinx [Virginia] Olson had a charter license, but she always went out with her husband, Jim, rather than independently. Is Lynn ready for another decade? Maybe, but she really wants to travel – more than eight miles from the dock.