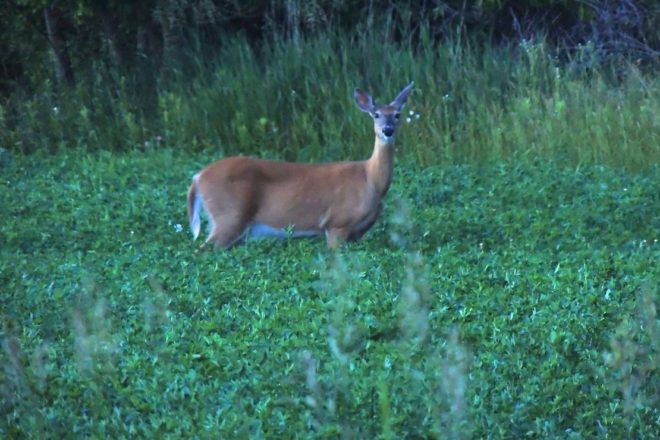 A booming herd means plenty of whitetails can be seen foraging in farm fields long before sunset on most days in Kewaunee and Door counties. Photo by Kevin Naze.

If you’re a do-it-all outdoors lover, fall’s arrival this weekend heralds one of your favorite times of the year.

Love to fish? Autumn may be the best all-around season for opportunities on the Kewaunee/Door County peninsula.

Monstrous chinook salmon and trophy-sized, spawn-minded brown trout have moved into bays, harbors and rivers, offering shore anglers a shot at the giants they could see only in photographs all summer. Yellow perch and walleye are biting around the bay, providing top-notch table fare, and there are opportunities aplenty to hook up with a smallmouth bass, pike or muskie.

If you don’t fish but wouldn’t mind seeing some, check out the fish-refuge areas at Strawberry Creek or Forestville during the coming weeks.

You can almost hear drags screaming as Great Lakes fishing message boards and Facebook threads light up in a “How many is too many?” debate on salmon stocking.

Although Wisconsin officials have stayed out of the fray, Jay Wesley – Michigan DNR’s Lake Michigan basin coordinator – has not shied away from the debate.

Knee-deep in a controversial lake-trout plan that involves a treaty agreement with tribal fishers, Wesley and other Michigan officials are asking Wisconsin anglers to be patient and cautious with salmon-stocking increases so as to not risk crashing the forage base.

Meanwhile, many charter and private boat anglers on our side of the lake continue to push for fewer lake trout and more chinooks, brown trout and rainbows.

Whichever side of the boat you’re on, make your feelings known by Sept. 30 by emailing [email protected]

Theodore Roosevelt and George Bird Grinnell founded B&C in 1887, and it was the initiator and champion of the first national parks, including Yellowstone, Glacier, Denali and Grand Canyon. The group also went to bat for wildlife, including advocating for the National Wildlife Refuge System Act, Federal Duck Stamp Act and Wildlife Restoration Act (Pittman-Robertson).

Long known for establishing the principles of responsible, ethical and sustainable-use hunting known as fair chase, B&C has a history of defining what is and isn’t fair chase.

The club has released a new statement on baiting, which reads in part: “Fair chase is based on the meaning of ‘fair’ that relates to legitimate, genuine or appropriate given the circumstances. Where an increased harvest of a particular species needs to occur, or where positive identification of size or sex is a legal requirement, baiting is appropriate given the circumstances and does not violate fair chase principles.”

During the past 132 years, the club has helped to eliminate unsportspersonlike practices. Decades ago, chasing game rendered helpless in deep snow, spotlighting, driving game into lakes, or using aircraft to locate or herd game, then landing to hunt them were commonplace. B&C was the first organization to recognize these practices as both unsustainable and unethical.

With respect to baiting, the club acknowledges in its new position statement that, “Outside of what hunting laws provide, there is no simple answer to the question about baiting being right or wrong.”

Where baiting for deer or bear is legal, whether to use bait becomes a matter of personal choice.

Hunting is a family activity that provides outdoor recreation and organic food for millions of U.S. citizens. Austad said some of WTU’s major initiatives focus on increasing hunting opportunities and providing outdoor experiences to youth, veterans and the physically challenged through chapter-mentored hunts.

“Keeping the hunting tradition alive is what we do here at Whitetails Unlimited,” Austad said.

The Sturgeon Bay-based nonprofit gave out more than $755,000 in support of various initiatives through the Preserving the Hunting Tradition program during the most recent fiscal year. Since its inception in 1982, WTU has spent more than $94 million on program services and activities that foster and enhance its mission.