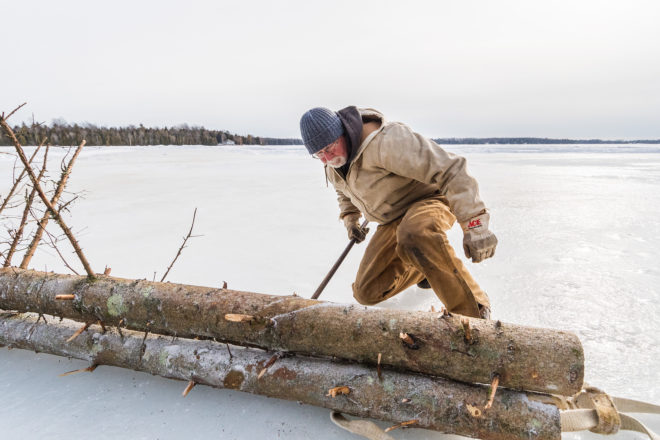 Kangaroo Lake was a potentially unhealthy mixture of crusty snowdrift and sheer, smooth-as-glass ice as a dedicated team of lake residents created more fish sticks on the shoreline the morning of Feb. 17.

This was the fourth year that Kangaroo Lake Association (KLA) members ventured onto the icy lake, wrestling 35- to 55-foot trees into groups of three hanging off the shoreline to create better habitat for fish and wildlife. The 2018 group of volunteers placed the 100th tree in the KLA fish sticks program. There are 28 host sites for KLA fish sticks to date.

Once the ice melts, the strategically placed trees anchored to the shore will sink into the lake. Those sunken trees are widely known today as “fish sticks,” a name bestowed on them by a TV cameraman who, while interviewing an expert on the principle of supplying woody habitat for wildlife, decided audiences would be flummoxed by the dry science of the project.

“I was talking about woody habitat and littoral zones, and the cameraman said, ‘That doesn’t really work for the general public. How about fish sticks?’ I said, OK, that sounds good. That name really stuck,” said Scott Toshner, a Wisconsin Department of Natural Resources fisheries biologist who is widely recognized as the state “fish sticks” expert.

“Like all good ideas, this one wasn’t mine,” Toshner said, adding that DNR records of adding wood to littoral zones – fish sticks – has been discussed going back to the 1960s.

But it wasn’t until 2006 when a group of stakeholders on the 191-acre Bony Lake in Bayfield County formed a partnership to improve water quality and wildlife habitat from the stresses of development and recreational use that fish sticks became a real thing. 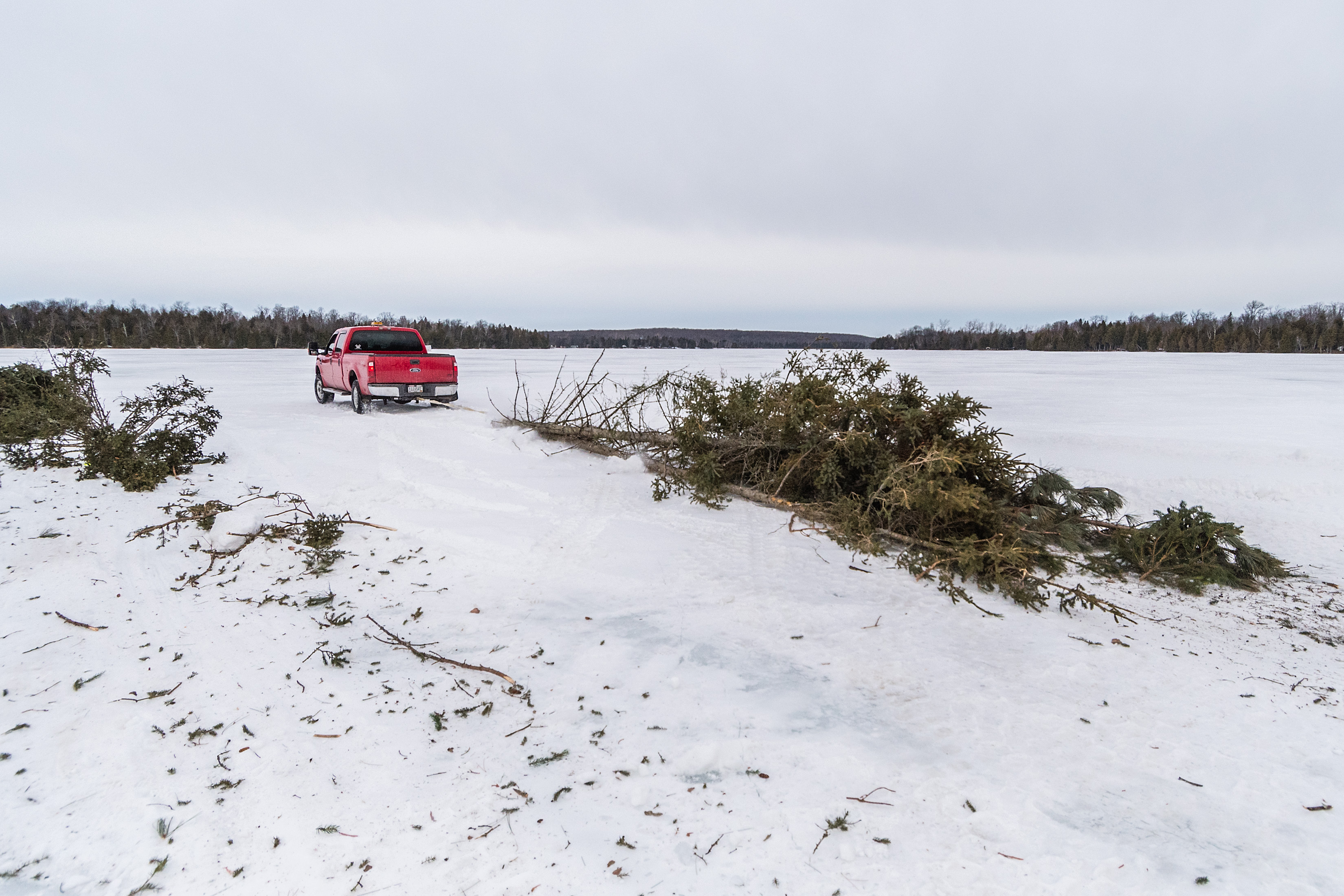 “They wanted to do some buffers and rain gardens,” Toshner said. “They also noticed fallen wood was cleaned up by landowners, so they thought of adding wood.”

Toshner not only helped with that initial project on Bony Lake, but he helped develop the simple permitting process that is now used for the application of fish sticks across the state.

“From a biological perspective, we really have hung our hats on some studies done in northern Wisconsin and the UP of Michigan that looked at wood abundance on shorelines, from undeveloped to developed, and there is more than 10 times more wood near the shore on undeveloped vs. developed shorelines,” Toshner said. “We just know we have a lot less wood than was historically present. There are a lot of intricate actions going on when we just try to replicate what nature had going on.”

He said the evidence for woody habitat in simple lakes that support just bass and panfish is pretty well understood, but not so much is known about a more complex system. However, a project is being conducted in Vilas County that will bring more hardcore science to understanding complex lake ecosystems.

They’ll look at the additional carbon uptake associated with the sunken trees, and how they provide habitat for other wildlife such as web-building spiders, dragonflies, waterfowl and other wildlife that lives near shoreland. They will also study energy transfer and how the fish sticks program protects shorelines from erosion and promotes growth of shoreline plants.

“They’re taking more of an ecosystem approach,” Toshner said. “We know fish use them. We snorkel and take pictures of fish using these structures, but we also see turtles using them, and herons, eagles and ducks. We’re also seeing these wood structures providing some buffer from wave action and erosion. We think they are energy dissipators.” 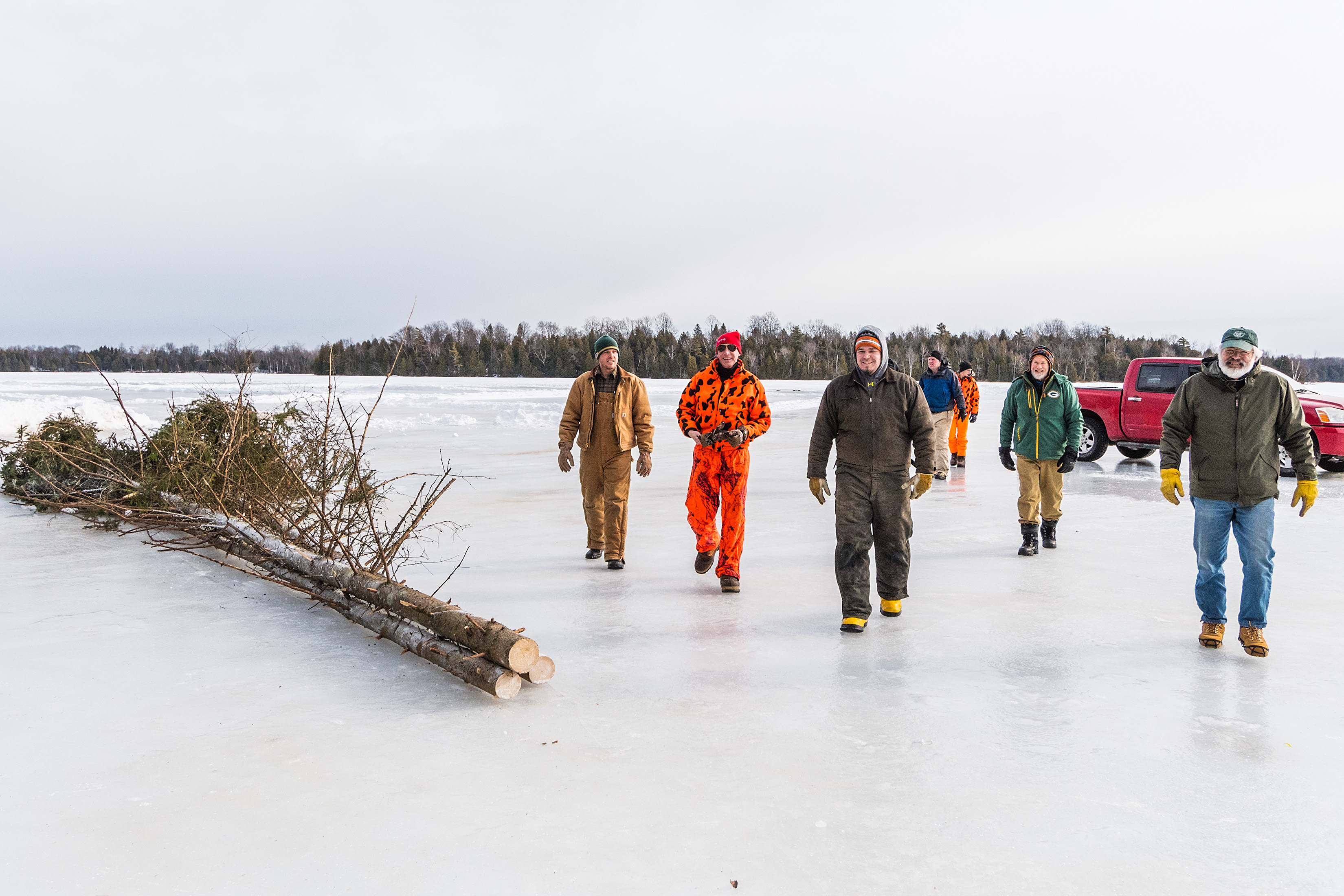 “It seems the idea has been pretty well accepted,” Toshner said. “I think the most stunning results come from the social side of things.”

He explains that since humans have been actively altering shorelines since the logging days and probably even before that, creating easy access for recreational use usually meant mowing the shoreline and cleaning woody debris from lakes.

“What we see up here, which to me is one of the most encouraging aspects, people who live on the lake, they’re noticing fish sticks projects. They find out these are intentional and see the benefits almost immediately. Some will want to do projects on their shoreline. Even people who don’t actively participate in the fish sticks, when a tree falls on their shoreline, they leave it, which is huge. We are starting to see a change. I think we hoped that would happen, but not to the extent that it happened.”

And when fish sticks are just part of a shoreland restoration project that might also include buffer zones, or just not mowing down to the shoreline, “We can see that source of sediments and nutrients has been stopped or greatly reduced,” Toshner said.

Tom Schneider, president of the KLA, said he connected with Toshner when he was originally researching the fish sticks project for Kangaroo Lake.

“He helped me understand the best way to secure the trees to the shore by crisscrossing them,” Schneider said.

One of the keys to making the fish sticks program work is, of course, having a good source of trees. The KLA has a willing partner in The Nature Conservancy (TNC), which harvests unwanted trees from the 367 acres it owns and manages on the north end of the lake.

“This project does help TNC with its project of converting a conifer plantation to a more diverse upland forest type by removing the non-native Norway spruce and overly dense native red pines from the site,” said TNC Conservation Ecologist Mike Grimm. “It also supports our mutual goal of increasing fish and wildlife habitat in the lake.”