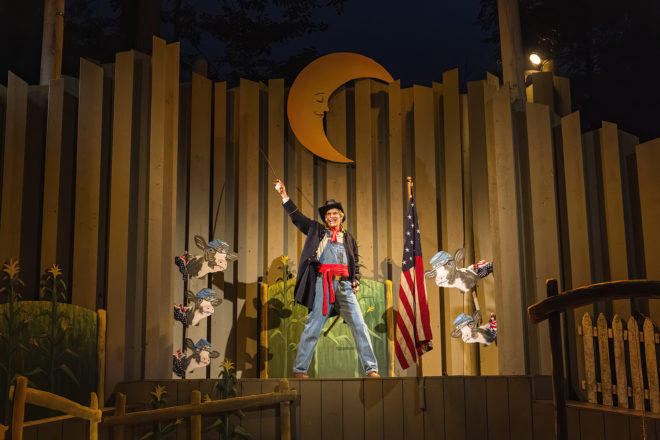 Fishing for the Moon has made a 30th-anniversary return to the Northern Sky Theater’s outdoor amphitheater in Peninsula State Park.

It debuted in the same place in 1992, and this season’s rendition includes veterans from the original cast: Composer and co-writer James Kaplan and Karen Mal are in the orchestra, and Jeff Herbst directs and portrays a Civil War colonel, Tucker Riley Olson.

The story takes place a few years after the Civil War in a small town in Wisconsin and follows Rufus Smith (Hayden Hoffman), a lovable though slightly daft citizen who knows everybody in the area. When Peter Rutherford Hall (Alex Campea) comes to town looking to “shoot” Col. Olson, Rufus and the other townsfolk try to keep the two from crossing paths.

Along for the ride are Lucy (Hannah Kato), a girl who loves Tucker and Shirlene’s (Lachrisa Grandberry) son, who went missing after the war; and Caroline (Claudia Dahlman), a school teacher who is the object of Rufus’affection, though the feelings are quite lopsided. With misplaced kisses and surprisingly in-depth thoughts about marriage, the musical has as much to do with relationships as with the colonel’s hunter.

The performance has a certain meta relatability that doesn’t distract from the story and adds some winking references for the older audience members. It’s short – like all Northern Sky Theater shows – but it still tells a genuine story and carries out character growth that makes sense.

The logistics of orchestrating a performance in an outdoor setting are hard to think about, let alone pull off, but the lighting and sound at Northern Sky work regardless. At the end of the show, there’s a moment – lit gorgeously and capturing the dissipating sunlight – that’s worth the wait.