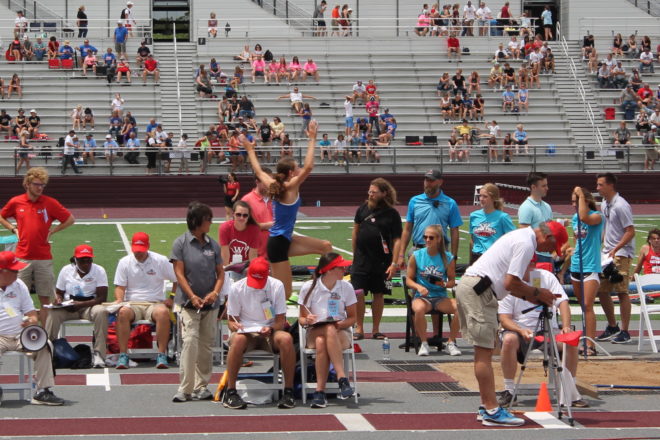 When she broke the state record in the long jump, only to see her own record broken 20 minutes later, Abbey Fitzgerald thought she may have missed her best shot at a state championship.

The Gibraltar senior went into the WIAA State Track and Field meet seeded fourth in both the long jump and triple jump, but the long jump is where she’d pinned her highest hopes. Gibraltar track and field coach Clayton Buske said Fitzgerald took her best to the meet at UW-La Crosse, reaching a level she had never approached before.

Lydia Kettner of Immanuel Lutheran broke the state record with her fourth jump, leaping 18 feet, 9 inches to move into the lead, only to see Fitzgerald outdistance her moments later.

“When you see them break out the physical tape and not the laser to measure, that means you might have a record,” Buske said. “I knew it was an insane jump.”

Fitzgerald’s jump measured 19 feet, ½ inch: a new state record. But hers didn’t last either. About 20 minutes later, Jessica Brueggeman of Royall, the 2019 state champion in both the long jump and triple jump, took her title back, smashing the record on her sixth and final jump of the day with a jump of 19 feet, 8 inches.

For Fitzgerald, the disappointment was softened by knowing she had posted the best jump of her career, but she also thought she had just lost her best shot at a state title.

“At that point, I was super tired, kind of lethargic,” she said. “My dad even said I didn’t look right. If you had told me I’d jump that far in the long jump and not win, I would have wondered what was up. I was disappointed, but knowing I had reached my personal best, I was okay. Going in, I knew it was going to be close with the top four of us.”

Fitzgerald had one event to go, and as she prepared for the triple jump, the long jump was still on her mind. But she soon found reserves she didn’t realize were there.

She posted a personal best in the preliminaries. Then another in the finals, moving into the lead with a jump of 38 feet, ½ inch. But Brueggeman wasn’t going to give up her title easily, jumping 38 feet, 7¾ inches in her fourth attempt.

“As soon as she jumped, I thought it was a big one,” Buske said.

Officials busted out the tape again, and moments later, the mark flashed on the electronic display reading 39 feet, 4¼ inches – a new state record that shattered the previous record of 38 feet, 9¾ inches.

Gibraltar’s fan section lost it. Buske lost it. And Fitzgerald? Well, she gave a half smile and got ready for her next jump.

Later Fitzgerald approached Gibraltar boys track and field coach Joy Bastian and asked, “So, what is the state record?”

Fitzgerald and Brueggeman each scratched their final jumps, and Fitzgerald had her state title. After a year lost to COVID-19, she was grateful.

“Honestly, it makes it all worth it,” she said. “I feel like if I did track last year, it wouldn’t have gone like this. In a weird way, I’m kind of thankful for it. Losing that year just made me want to work harder this season because I missed a season. It made me want to make the most of this one.”

Fitzgerald competed at state three years ago, but she wasn’t in the same league as Brueggeman, placing 12th in the long jump.

“I don’t even know that I saw her then,” Fitzgerald said. “I was not even close. So to go head to head, it shows how much I’ve improved.”

That improvement came through a lot of hard work and consistency.

“Just getting in the habit of working out and doing as much as I could to get better,” she said. “It’s never saying, ‘I can’t do this; it’s too much work.’ I was just dialed in.”

Fitzgerald will compete at UW-Eau Claire next fall, and she’ll carry a new level of confidence with her.

“It makes me really excited because now I feel like I have the ability and feel prepared to do well my freshman year,” she said.

Olivia Stenzel capped a stellar high school career by finishing third in the 800-meter run and eighth in the 400-meter run.

“Olivia had a great career,” said Sevastopol track and field coach Dennis Ploor. “She left everything on the track at La Crosse and finally got on the podium as an individual, both in cross-country and track this year. There’s so much you can say about her. Her goal was to break the school record in the 400, and she did.”

Ploor said he was proud of the way the team persevered to put together a great season.

“In my 23 years coaching, that’s probably the biggest contingent that we’ve had at state,” Ploor said. “The senior girls have been a really great group of athletes, and they come to play. They don’t like to lose.”