Two years ago in an attempt to cut back on sugar and create a somewhat healthier version of the quintessentially classic Wisconsin supper club drink, the Old Fashioned, I started to make a variation using artificial sweetener. I called this drink “The Ryan Braun” in honor of the disgraced Milwaukee Brewers steroid-using outfielder. Whereas the joke may have been original, I am certain I was not the first to use artificial sweetener in an Old Fashioned. 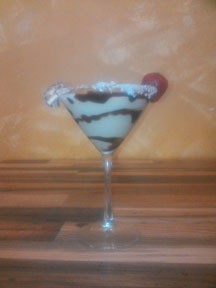 Professional and home mixologists alike are constantly evolving known drinks, adding their own flavor to create new and often better versions. I always get a kick out of seeing an unsuspecting server (or friend) being handed a drink by a bartender asking their opinion. There are many failures and often this is done in vain without success. But when there is success, other bartenders are quick to modify and evolve the vanguard’s creation and often claim it as their own.

My interpretation of a Snickers Martini came from such a place. I first learned of a popular pub shot a few years ago called the PayDay shot, a very simple shot consisting of two equal ingredients, butterscotch schnapps and Frangelico. Frangelico is a lovely hazelnut liquor that will sit happily in any liquor cabinet and goes particularly well with coffee.

What impressed me about the shot was the use of salt. The “shooter” licks the inside back of their hand and places a small amount of salt as if doing a shot of tequila. You lick the salt then drink the shot. It tastes like the PayDay candy bar and you are left with a salty peanut aftertaste. I have always loved the extra dimension a pinch of salt adds to sweet foods and drinks.

I thought I could evolve this idea a bit and added chocolate liquor (exterior) and vanilla vodka (nougat) to mirror the flavors in a Snickers candy bar. The “Snickers Shot” was a hit and I knew it had developed some traction when folks would come in asking if I knew how to make it.

Two years ago my former employers asked me to do this shot as a martini. There are many different versions of a Snickers Martini on the internet and mine is really about deconstruction.

So whatever bar you may happen to be standing behind, have fun with it and dare to reconstruct your own tastes and flavors that just might foster new ground in the art of mixology.

Add the ingredients with ice, shake the icy mixture vigorously, and strain into a Martini glass. I like to grate chocolate on the top of the finished drink and garnish with a small piece of the Snickers candy bar and/or a nice berry. I also salt half of the rim so folks can decide how they want to experience the flavors, because not everyone likes a salty rim.

Daniel Dersé is a bartender at Mojo Rosa’s in Egg Harbor and Greenwood Supper Club in Fish Creek.