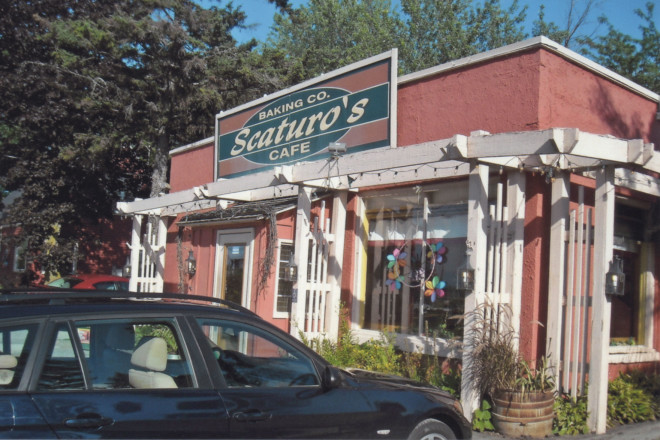 You know you’re dealing with a true food service professional when, during a casual conversation about favorite restaurants, the phrase “flavor profile” escapes their lips while describing a recent meal. It’s not the kind of thing a casual or even regular diner would say, but it is exactly the type of conversation you hear when talking with people like Bob and Joanne Scaturo, owners of their signature restaurant on the West Side of Sturgeon Bay. 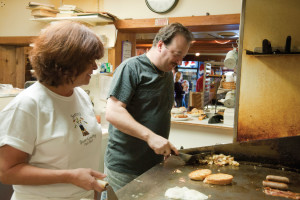 Both Bob and Joanne have spent most of their years making a living in the restaurant business and the ongoing popularity of their restaurant speaks to the passion they bring to each and every dish they prepare for their customers.

Scaturo’s Baking Company and Café is a family-owned and operated business that specializes in home-cooked food served with a smile in a comfortable, casual atmosphere. Scaturo’s is a full service restaurant offering breakfast, lunch and the self-proclaimed “Bay’s Best Sunday Brunch” year round.

Bob and Joanne, natives of New Jersey and Philadelphia respectively, relocated from New Jersey to Door County in the mid-1990s to start their business. Joanne’s father had a vacation home in Sister Bay, which is what originally brought them to the area.

Bob was working a corporate food job with a chain restaurant but was eager to have his own kitchen. The pair tried to buy a couple different restaurants in Virginia Beach, with both deals falling through. With an offer to help finance a Door County restaurant from Joanne’s father, Bob came to scout locations during a Door County winter. He arrived in the middle of February, toured a property near the top of the hill on Green Bay Road, and called his wife back in New Jersey, telling her to pack up and get ready to move.

Within weeks, the family of four arrived, ready to get to work. “I looked in February and we were here in April,” says Bob. Their oldest son finished his kindergarten year in Door County; now both sons are in college.

Getting the restaurant up and running was the immediate priority. “Two weeks after we got here, we opened,” says Joanne.

“We had to open,” continues Bob. “We were not undercapitalized – we were NON-capitalized! We had to start making money!”

Both Bob and Joanne claim ancestry that is half-Italian, and the influence on their menu is obvious. From the traditional Italian wedding soup with fresh escarole, tiny meatballs and orzo pasta, to their Italian-themed overstuffed sandwiches, such as The Godfather (beef, turkey and Swiss with Russian dressing on sauerkraut rye), the Italian Hoagie (a “classic Italian hero” sandwich), The Mob (turkey, roast beef and ham, cheddar and Swiss cheeses with bacon, lettuce and tomato on toast), and the meal-for-two-on-a-bun, known as the Guinea Gutbuster, an East Coast-style steak sandwich with peppers, onions, tomato, mushrooms and provolone cheese.

Scaturo’s did not serve breakfast when they first opened, but by August of their first year they had a grill. Bob says that “Joanne loves making breakfast,” and boasts that they get more compliments about their omelets than almost anything else.

As evidenced by the order in the name of their business (Baking Company and Café), fresh baked goods are an important part of the offerings at Scaturo’s, although they, too, weren’t part of the original plan. The bakery “came about because it was here” when they purchased the property, says Bob.

The bakery features homemade specialty breads and sweet treats of all kinds from cookies to pecan rolls and homemade pies. The breads they produce range from standard white or wheat to specialty breads like Swedish Limpa, Parmesan Pesto and Cherry Walnut, incorporating Door County cherries. Their stuffed breads, including Antipasto (ham, salami, provolone, onions, peppers and black olives), Pepperoni & Three Cheese (pepperoni accompanied by provolone, mozzarella and cheddar) and Vegetable Pesto (sun-dried tomatoes, artichoke hearts, pesto and provolone cheese) are meals in themselves. Every Wednesday features the “2-for-1 Bread Day” special, which brings loyal customers from both sides of the city each week to load up their larders. Their huge chocolate chip, Door County cherry and sugar cookies have customers frequently sneaking in to fulfill a sweet tooth, as well.

During the summer season, Scaturo’s offers a traditional Door County fish boil on Friday and Saturday nights, starting Memorial Day weekend and running through October. The whitefish dinner is also paired with a simple dinner menu for those who choose not to eat the bounty of Lake Michigan. The restaurant will also do private fish boils either on or off premises.

In fact, catering is an important part of the Scaturo’s business. Bob is frequently seen around town delivering platters of sandwiches and wraps, vats of pasta salads, trays of their oversized cookies, and crock pots full of soup to business meetings and corporate board rooms. Though they don’t regularly offer dinner in the restaurant, they do have complete homemade dinners available to go on weekdays, including entrée, side dish and dessert of the day for two people for only $13.99.

They beam with pride when they discuss their take-home Thanksgiving Dinner, which they call their Moveable Feast. For $14.99 per person, minimum six people, Scaturo’s will cater a complete turkey dinner with all the fixings, including turkey, sausage bread stuffing, real mashed potatoes and fresh baked pie for dessert.

“All the people who used to work for us come home and help out,” says Joanne. “We’ll all be in the kitchen, watching football while we’re working.” Customers, many of whom use the catering service year after year, drive up and stand by while the Scaturo’s crew loads their vehicle up with the feast.

Bob and Joanne Scaturo take a great deal of pride in the food they offer to their customers, and they enjoy creating a family environment in their restaurant, around the table as well as in the kitchen. Their more than a decade and a half in business speaks volumes of their success.

In 1994, Robert and Joanne Scaturo left New Jersey in a moving van with anything they couldn’t sell, two little boys and $22,000 to open a great little restaurant. 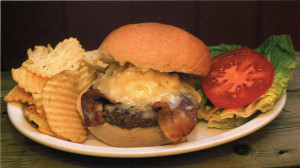 Robert proudly boasted…No burgers! No pizza! No fried foods! After 5 years of customers, employees, and his children asking for burgers on the menu, Robert stubbornly stated, “We didn’t come all this way to sell burgers!”

After 10 years of countless mortgages and creative financing, Robert, Joanne and a group of top financial experts had a meeting in effort to shore up the bottom line. Almost unanimously, it was decided to put burgers on the menu. Never one to give in easily, even after being wrong for years, Robert agreed with one stipulation…it had to be the best!

So off he went on a pilgrimage! Eating small, big, thin, fat, fried, broiled and boiled burgers, with everything from onions, peppers, ham, guacamole, eggs, and every type of cheese (all washed down with liberal amounts of Bud Light!). Bloated and still pondering, he went to see his friend Mark Marchant who had him try his fresh made 1/3 pound burger and his in-house smoked bacon. Next he visited his friend Chris Renard and sampled Renard’s excellent cheeses until they agreed on a 2-year white cheddar. Combining the best ingredients and putting them on “right from the oven” Scaturo’s Kaiser rolls, Robert had what he was searching for:  “The Ultimate Door County Burger.”

Nearing exhaustion from so many burgers and so many Bud Lights, Robert smiled to his friends and turned to his beautiful wife, looked into her eyes and said…”Why didn’t I think of this sooner?”