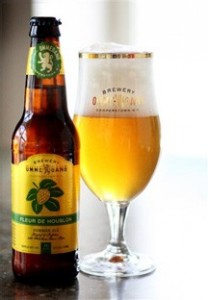 I’ve been a fan of the amazing Ommegang Brewery of Cooperstown, N.Y., for a long while now because of their dedication to creating Belgian-style beers here in America, which is why I am amazed it has taken me until now to try their absolutely delicious summer offering, Fleur de Houblon (Hop Flowers).

This is only the second summer of this seasonal release from Ommegang, which means an entire summer went by without this beer ever crossing my palate. What a shame!

The brewer says of this beer, “Nothing is more evocative of summer than the beautiful aroma of flowers, and the favored flowers of brewers are hops.”

The aroma of Fleur de Houblon is enchanting – bright, floral and extremely inviting.

The taste is crisp and clear with just a hint of fruity and spicy notes. It pours golden with a slight haze and tightly beaded white head sitting atop it all.

If you are looking for a delicious summer ale, I recommend you smell the favorite flowers of brewers as realized by Ommegang. 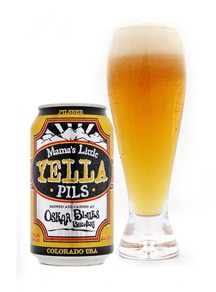 On a less happy note, I am still searching for an American brewer who can make a decent pilsner. Mama’s Little Yella Pils from Oskar Blues Brewery of Lyons, Colo., purports to be a Czech-style pilsner.

I’ve wanted to try it for a long time because I love Czech pilsners. I think they are the finest beers in the world, and I’ve drunk them fresh from the brewery in the Czech Republic. They are soft, liquid gold.

Mama’s Little Yella Pils is not even close to a Czech pilsner. This is too heavy and too hoppy to even be mentioned in the same breath as a Czech pilsner, or even a Czech-style pilsner. It’s like a dumb, roughneck American cousin of Czech pilsner.

One day I will be surprised by an American brewer who can actually brew a Czech-style pilsner without all the heavy-handed hopping of contemporary American craft brewers. Maybe.