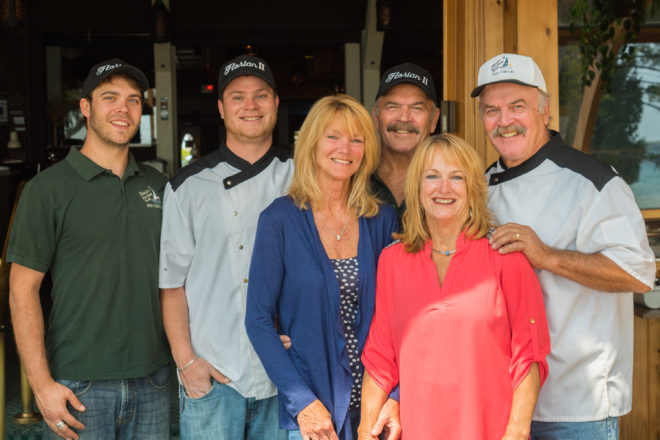 The Florian II in Baileys Harbor is a family affair, with, from left, Brandon, Dylan, Joe, Tina, Jerry and Mindi Kwaterski. Photo by Len Villano.

The spot across Highway 57 from the Blue Ox in Baileys Harbor was first occupied by a stagecoach inn built by Carl Hendricks in 1885. The rooms on the second floor were equipped with small wood-burning stoves, assuring year-round occupancy, and there was an adjacent stable for the horses. About 1900, it was sold to Soren Hansen. In later years, it became the Panter Hotel, the Cotton Club, Amandus Peterson’s Bar and Dance Hall and Charles and Eugene Charkowski’s House of Mr. C. Another owner named Mandy Peterson is also mentioned briefly.

But within the memory of most people in Door County, the restaurant on that bit of prime lakeshore property has been operated by the Kwaterski family. In 1956, Florian Kwaterski was interested in a number of things, but owning a restaurant was not one of them.

He and his wife, Ada, had an evening job as entertainers – he playing drums, guitar and upright bass and she accordion and organ – at the club in Baileys Harbor. The owner owed them money, and when Florian went to collect, he ended up instead with the deed to the place, which he renamed the FlorAda Club. Later he built the first motel and pool in Baileys Harbor, now Beachfront Inn, and ran a filling station and sold snowmobiles on the spot where Boettcher’s auto dealership once was, now Nelson’s storage building. His last business venture was Baileys Grove Travel Park and Campground on County F that he created from an abandoned airport.

Florian and Ada, their six kids and Ada’s mother, Augusta Walther, who had been the cook at Hotel Carmen in Sturgeon Bay, moved into the rooms above the club. Twins Joe and Jerry Kwaterski were eight at the time. “Grandma basically raised us,” they say. “Our folks were busy with the restaurant, and it was Grandma who got us all up in the morning, fixed our breakfast and got us off to school. Dad was an amazing chef and, when Grandma wasn’t looking after us, she cooked, too. Mom tended the bar.”

“There probably weren’t more than a dozen restaurants in Door County then,” Jerry says. As was the custom in those days, all the kids worked in the family business, and Jerry says it was a great place to grow up. He started cooking beside his dad and grandmother when he was still very young. By 15, he was in charge of grilling steaks on the live charcoal grill in the center of the restaurant. Joe remembers that he started cleaning bathrooms at age ten. And both can still hear their dad yelling, “Get off the dock and in here. You need to be busing tables.”

All the kids were part of the restaurant crew through high school and on college vacations. Although their four brothers and sisters eventually went on to other careers, the twins never really left. In 1970, they were students at University of Wisconsin-LaCrosse, majoring in biology and physical education, planning to become teachers and coaches, but when their dad decided to sell the restaurant, they cut short their education to take it over.

About 3 am on a Friday in early August 1972, the family, wait staff and entertainers were asleep upstairs when Joe smelled smoke, went downstairs and discovered the club in flames. Chief Gordy Nelson speculated that 100,000 gallons of water were used in an attempt to save the club. Most of it came from the lake, but when seaweed clogged the hoses, fireman drained the swimming pool at the motel next door.

Their efforts were in vain, and the club burned to the ground. Pictures in the local paper showed Ehrle Armbruster, the trombone player, mourning the loss of his instrument, and Joe picking up a soggy pair of his trousers. The doghouse was untouched. Everything else was gone, and the loss was only partially covered by insurance. The twins were just 24, but they had years of experience in the business, and they were determined not to end the family legacy. By the next day, they’d put up a sign, “We will be back!”

The new facility, named Florian II Supper Club in honor of their dad, opened in May 1973. It’s still a family business. Both the twins met their wives in Daytona. Jerry married Mindi Keogh in 1984, and Joe and Tina Hart were wed three years later. Jerry and Mindi’s children, Sheena and Shane, and Joe and Tina’s three boys, Brandon, Dylan and Ryan, all started working in the restaurant young, as their dads did, and continued through college vacations. Now Sheena works for a computer company in Fort Lauderdale, Shane is setting up a boat distributorship in California, and Ryan is pursuing a degree in marine engineering in Florida. 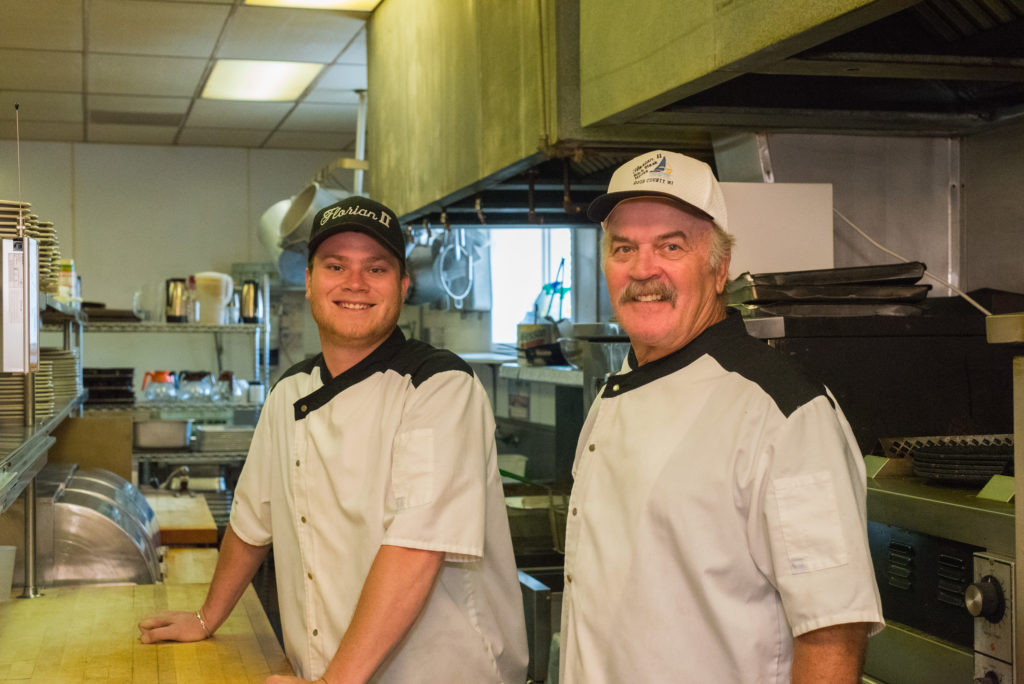 Jerry runs the kitchen; Joe is in charge of the cocktail lounge and dining room. Mindi and Tina share hostessing and bartending duties. Brandon works as second chef alongside his uncle Jerry, and Dylan, who graduated last year from the University of South Florida with a degree in marine biology, assists his dad in the bar.

The FlorAda Club was one of the early supper clubs in Door County, and the big sign out front still carries that wording. Many things haven’t changed in the 46 years since he and Joe bought the place from their dad. Prices are a bit different, of course. In the early sixties, a shrimp cocktail was $1, ribs were $3 and cocktails ranged from 85 cents to $1. The big glass case that displayed pick-your-own steaks and the indoor charcoal grill are long gone, as is the old slogan, “We want a steak in your future!” But Jerry is still cooking the steaks, Lake Michigan whitefish and barbecued pork-back ribs, as he’s done for more than 50 years. The ribs, his signature item, are pre-roasted for 2½ hours, using his dad’s recipe. He cooks 60 pounds of them every day, three tons a season. 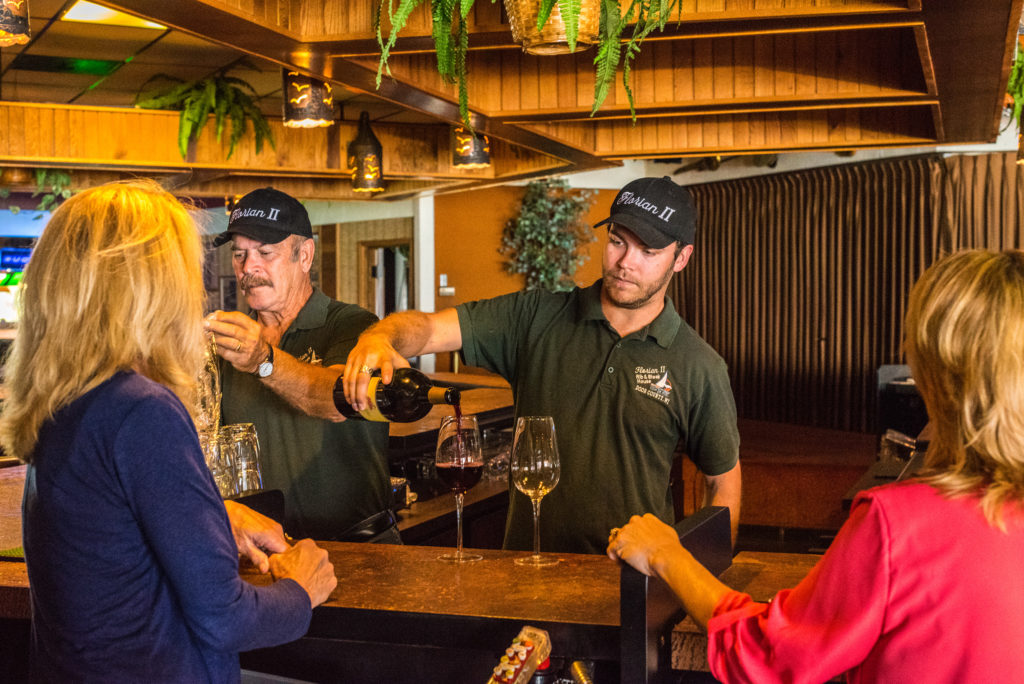 Joe and Dylan Kwaterski behind the bar at Florian II. Photo by Len Villano.

Florian II is open 4:30 to 9 pm every night except Monday. It has the only “show lounge” north of Green Bay, with musical groups playing on Friday and Saturday nights in July and August and on Saturday nights in September and October.

In 1975, Jerry and Joe bought the Blue Ox, the 1887 bar across the street from Florian II, from Carl Jonas. In the early days of the bar, guys could have a beer or two in the bar while their hog was being butchered out back. Joe describes the Ox as a “drinking museum,” and says he and Jerry, like the Pickers on TV, have spent 40 years looking for additional antiques to add to the décor. Home of the half-pound ox burger, it’s open for lunch and dinner 11 am to 2 am and is a stop on the Door County Trolley ghost tours. Tina Kwaterski has experienced flying pots in the kitchen and a ghostly hand on her back, and a guest a few years ago felt the presence of two little girls in the back room, where the owner’s living quarters once were. “She didn’t know that we’d sealed off a closet in that part of the building,” Jerry says. “And when we remodeled it and opened the ceiling to the attic in 2014, we found paper dolls and other toys, so maybe…”

Both restaurants are open from mid-May through October. Jerry and Joe and their wives take November off, then move to their winter home near Marathon in the Florida Keys, where they operate a small restaurant at the Encore Campground for five months. It’s a schedule they’ve kept for 30 years.

“There aren’t too many old family businesses like ours that have been here for 60 years, through four generations,” Joe says. “The season is so short in Door County – 12 or 14 weeks – that you can’t make it if you don’t run it yourself.” (After more than 50 decades in the business, the brothers still clean both restaurants themselves every morning, and Joe is still scrubbing the bathrooms!)

“We’re grateful,” both Joe and Jerry say. “We don’t make a lot of money, but we live comfortably. It’s great to see people who come back year after year for several generations. Former employees come back to visit, too, and ask about our kids, whom they’ve known since they were little fellows. It’s the personal connections that make the job great, something many other businesses don’t have.”