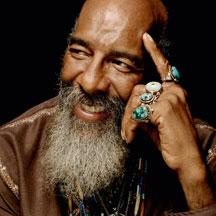 For over three decades, Havens has used his music to convey messages of brotherhood and personal freedom. Born in Brooklyn, Richard P. Havens was the eldest of nine children. At an early age, he began organizing his neighborhood friends into street corner doo-wop groups, and was performing with The McCrea Gospel Singers at 16. At the age of 20, Havens left Brooklyn to seek out the artistic stimulation of Greenwich Village.

By decade’s end, he was in great demand in colleges across the country, as well as on the international folk and pop festival circuit. However, it was Havens’ Woodstock appearance that proved to be a major turning point in his career. It was here that he sang the song “Freedom,” a song now considered to be the anthem of a generation.

During the ‘70s and ‘80s, Richie continued a non-stop world touring schedule and a steady release of albums, including End Of The Beginning, Mirage, Connections, the Italian-made Common Ground, Simple Things, and Now. He continued that live performance pace throughout the ‘90s, including a landmark Madison Square Garden appearance at the Bob Dylan 30th Anniversary Concert in 1992.

Havens will be joined on the Peg Egan PAC stage by Harry Manx, whose sound is a bewitching wedding of blues tradition and classical Indian ragas.

The Peg Egan PAC is located on Church Street in Egg Harbor. The concerts are free to the public. In case of rain, concerts will be held at the nearby Orchards Golf Course. A “Meet and Greet” after party will be held for this show at the Door County Outpost, 4690 Rainbow Ridge Court, Egg Harbor.