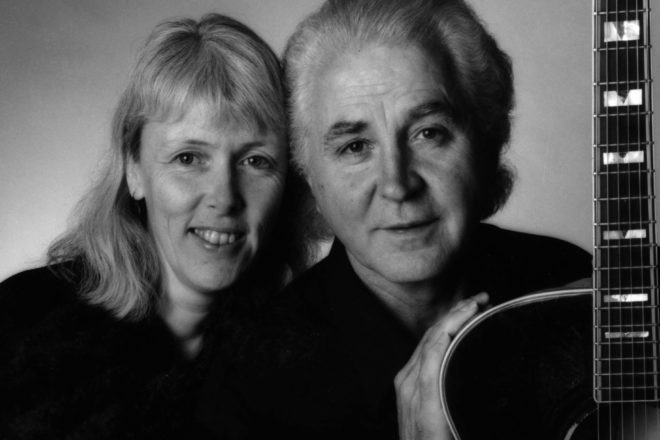 On Sept. 9 at 7 pm, Lost Moth Gallery welcomes Steve Gillette and Cindy Mangsen to the stage.

Mangsen and Gillette have been performing together for 25 years, bringing together their love of traditional music and their wealth of original songs. Their six duet albums have appeared on many folk Top Ten lists, from the WFMT Midnight Special (Chicago) to The Boston Globe.

Gillette has been writing songs since the 1960s. Since Ian and Sylvia first recorded “Darcy Farrow” in 1965, his songs have been covered by John Denver, Garth Brooks, Linda Ronstadt, Tammy Wynette, Waylon Jennings, Josh Ritter, and many others. But Gillette’s own versions are some of the best, with his warm baritone voice and his unique finger-picking guitar style.

Mangsen is “one of the finest singers in American folk music”(Come for to Sing). Accompanying herself on guitar, banjo, concertina, or mountain dulcimer, Mangsen is known for her compelling interpretations of traditional ballads, as well as for her own writing and her wonderful ear for harmony. Her latest solo album, Cat Tales, is devoted to “songs of the feline persuasion.”

Don’t miss this show at Lost Moth Gallery located at the north end of Egg Harbor at 7975 Hwy 42. Lost Moth is a cozy concert venue surrounded by art and offering coffee, tea and dessert. Doors open at 6:30 pm and the show starts at 7 pm. Tickets are $20 cash. Call 920.495.2928 for reservations.