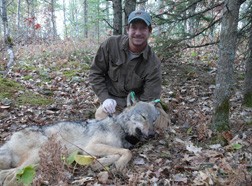 Hans Martin, a 2007 Sevastopol High School Graduate, worked in the Boundary Waters of Minnesota where part of his job included trapping and tracking wolves. His supervisor in Ely, Minn. encouraged him to apply for a position with the Wolf Project in Yellowstone National Park.

Imagine waking up everyday at 4:45 am in a cabin in America’s first national park, Yellowstone, checking the locations of wolves via radio collars, brewing a pot of coffee and heading out for the day.

For Sturgeon Bay native Hans Martin, the above description is his everyday routine.

His love of the outdoors came from his family, who spent much of their time in nature. Martin’s parents, Max and Deanna, took Hans and his older sister Andréa camping, hunting, fishing, canoeing and skiing.

“I guess I still can’t get enough of it,” he said.

A 2007 graduate of Sevastopol High School, Martin went to the University of Wisconsin – Madison where he earned a bachelor’s degree in wildlife ecology with an emphasis in natural sciences.

He worked for the United States Geological Survey trapping and following wolf movements in the Boundary Waters of Minnesota after graduation. That’s where a little luck came in.

“My supervisor from Ely, Minn., completed her Ph.D. in Yellowstone and was familiar with the Wolf Project. She suggested I apply to be a volunteer for the 30-day winter study,” Martin said.

So what exactly does Martin’s job entail? Well, that depends on the season. 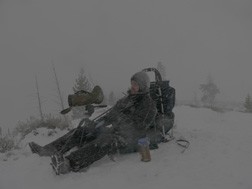 Martin watches wolves during a blizzard in Yellowstone National Park this past winter. Martin was selected to participate in two, 30-day winter wolf studies in the park, before being offered a full-time position.

In summer, Martin does what’s called road management in addition to his research. More than 3 million people visit Yellowstone National Park each year, and while one of the park’s main purposes is to connect people to wildlife, Martin’s job is to make sure people don’t get too close to the animals.

“It mainly comes down to keeping wolves away from people and people away from wolves in order to maintain the wild nature and safety of the animals,” he said.

While it may sound easy, Martin said educating visitors can be trying. Park law states that humans must stay 100 yards away from any wolf or bear, but when animals try to cross the road, for instance, people get curious and start to congregate.

“It can be frustrating on days when the wolves are very close to the road and try to cross. Many times people forget that these are wild animals and that while some of these animals may be somewhat used to humans it can be fatal for the wolves if they become habituated to humans,” he said.

During the 30-day winter studies Martin tracked wolf movements, recorded an activity budget, determined the wolves’ kill rate, observed the wolves’ behavior and studied the health of the animals the wolves fed or scavenged on. The researchers learn valuable information from the winter study on both the wolves and their prey, Martin said.

On a typical day, after checking the wolves’ location through their radio collars, Martin figures out where he can set up to get a visual of the pack and heads out.

“Once I find them I record their location, the number of wolves present, their IDs if they are collared and their activity,” he said. 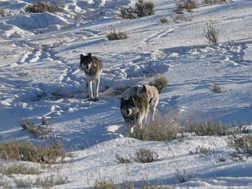 A pack of wolves moves toward Martin and his research group in Yellowstone National Park. The moment when the pack stood just 200 yards away from them, stared them down and walked away is one of Martin’s most memorable experiences from his work in the field.

Safety is always a priority; in fact, it’s the top priority. Even though Martin’s job is to collect data, he never does so at the expense of his safety. He and his fellow researchers always leave a travel plan, carry park radios, bring warm clothing and carry a first aid kit at all times, he said.

Martin’s time in Yellowstone hasn’t been all work, though. His favorite place is on the way to Cooke City, Mont., in the northeastern corner of the park.

“There are huge cliffs and mountains that shadow Soda Butte Creek and a thick conifer forest that makes you feel like you are truly in the wilderness,” Martin said.

He’s also seen nearly every type of animal possible in the park, including near the small two-bedroom house where he resides in the middle of the park. Wolves have run through the backyard and bison have stood outside the 23-year-old’s window.

In his downtime at the park during the afternoons he usually takes a nap before heading back out for the evening. He also passes the time catching up with current events and perusing the latest issue of Rolling Stone.

Between his time in Minnesota and Yellowstone, Martin accrued some memorable experiences, although his most memorable moment so far happened in Yellowstone.

“I had skied about eight miles uphill into a huge basin looking for the pack we were studying. We found them bedded on a hill by midmorning about 1.5 miles away.

“We then watched them rally and begin to travel directly towards us. They chased bison and elk, but continued traveling in our general direction. Right as the sun was beginning to set they disappeared into a drainage ditch about 200 yards away, and then reappeared much closer.

“The alpha male was leading the pack, and he stopped and stared at us. The rest of the pack stopped in a single file line behind him and also locked eyes with us.

“They then turned away and trotted down the slope. It was an amazing encounter,” Martin said.

Martin’s most frightening experience happened in the Boundary Waters. His group had been trapping wolves for over a week, and they were headed out of the Boundary Waters when the Pagami Creek Fire crossed 15 miles in a few hours. 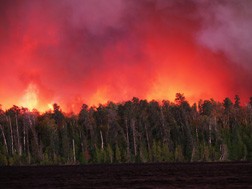 A photo Hans Martin took of the Pagami Creek Fire in the Boundary Waters last year. Martin and the other researchers had to be airlifted via floatplane because of the rapidly spreading fire.

The wildfire moved so rapidly that it burned the eastern shore of the lake where the group stopped because of smoke and charred birch bark falling from the sky, he said.

“We ended up getting evacuated by floatplane the next day,” he said.

During a normal week, Martin spends one half day doing paperwork, while the rest of his time is spent in the field – rain or shine.

Martin hopes to use his experience in Yellowstone to work toward a master’s degree in wildlife ecology on wolves or another carnivorous species. His ultimate goal is to become a regional wildlife biologist.

For now though, he enjoys working outside, completing fieldwork and showing park visitors wolves.

“The excitement of the visitors when they see their first wolf is contagious and makes the coldest and rainiest of days worth it,” he said.