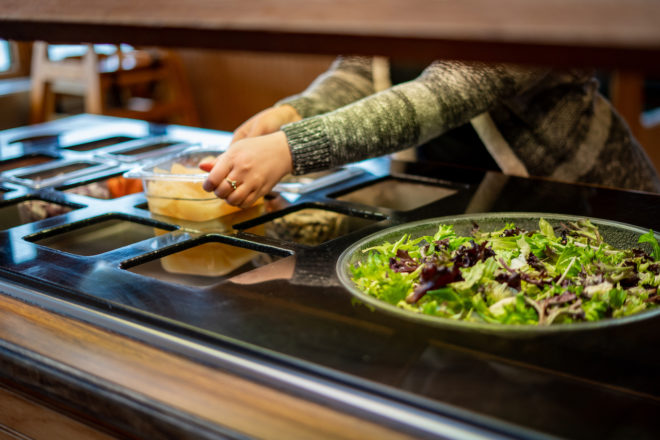 Local restaurant owners must deal with persistent food-scarcity issues – most recently, lettuce. Here, an employee sets up the salad bar at Sonny’s Pizzeria in Sturgeon Bay. Photo by Rachel Lukas.

Early in 2022, avocado costs skyrocketed, saddening guacamole lovers and causing avocados to vanish briefly from some restaurant dishes. The year before, restaurant owners had trouble finding, or affording, potatoes.

In recent months, an outbreak of avian flu decimated flocks of egg-laying hens in large facilities nationwide and worldwide, causing Americans to rethink their breakfast plans. And from November through January, a disease in Salinas Valley, California, lettuce fields caused at least one local grocer, Tadych’s, to post a sign above a few small iceberg lettuce heads to explain the shortage to salad-loving shoppers.

The notice told customers that lettuce in the afflicted fields was basically melting away – courtesy of tiny insects called thrips that had spread a virus called impatiens necrotic spot virus – and it would be a couple of weeks before the fields were treated and back to normal.

Door County restaurant owners have been looking for ways to absorb sudden cost increases and deal with ingredient scarcity, and that’s all been especially tough this year, said Jason Estes, who founded Sonny’s Pizzeria in Sturgeon Bay 26 years ago at age 21.

“Lettuce is still through the roof,” he said. “We kind of absorbed that. I thought about cutting out the salad bar, but we decided to buy pre-shredded stuff [during the worst of the shortage]. Now we’re buying heads of lettuce and cutting it ourselves because you get a better life out of it and a little better yield.”

Also during the past two months, a soil-borne disease, Pythium wilt, has hurt many California fields, adversely affecting the production of various vegetables.

The lettuce shortage prompted the Tavern League of Wisconsin to promote a Facebook post telling patrons they should expect restaurants to find ways to compensate for shortages of lettuce or other items, whether through raising prices, offering different greens and vegetables, or absorbing the financial pain.

Wade Ebel, whose family operates the Sturgeon Bay restaurant and pub Greystone Castle, said he had to raise some prices due to inflation, and at times, because of the scarcity of certain items, the establishment can’t offer some menu features – occasions when he couldn’t get the type of chicken fingers he wanted, for instance.

Ebel receives deliveries from two food distributors, and often, when one can’t get a product, the other can. That wasn’t the case for iceberg lettuce during December, however.

“When lettuce was short, it was hard finding it,” Ebel said. “I went to all the grocery stores in town, and talked to my distributors, and I ended up buying a different type of lettuce just to make a salad or make a sandwich. Through that lettuce shortage, we had to look for different products. We had to outsource and look for different means of getting what we’re looking for.”

Ebel said he doesn’t know what to expect next because much of California just endured two weeks of heavy rains and flooding.

“It’s been a challenge this year – more than usual – but every year there’s some issue,” said Carole Groth, who has owned and operated Coyote Roadhouse near Kangaroo Lake for 23 years.

Groth said she buys some local produce in the summer and maintains good relationships with multiple food purveyors year-round so she can get what she needs. Last year, she had difficulty finding the french fries she likes to serve.

“You just have to adjust somehow,” Groth said. “It’s on the menu, and we don’t believe that you can just line out an item unless you really can’t find it anywhere.”