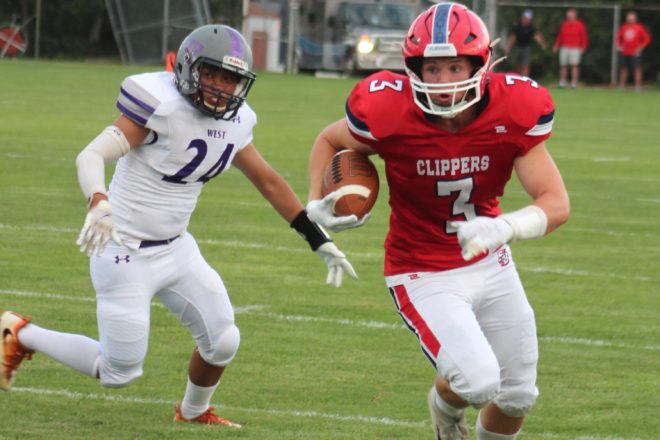 Sturgeon Bay’s David Zuehlke (3) runs with the football while being pursued by Green Bay West’s Aydin Vang (24) in the Aug. 19 game at Memorial Field. Photo by Kevin Boneske.

Sturgeon Bay, which led 41-0 at halftime, capitalized on the Wildcats’ first-half turnovers and kept Green Bay West off the scoreboard until the fourth quarter.

The Clippers, who last played an 11-player schedule in 2018 and are also in their first season with Carl Waterstreet as head coach, host another non-conference game Aug. 26 against Antigo, prior to starting their seven-game Packerland Conference schedule Sept. 2 at Bonduel.

Southern Door was also victorious Aug. 26 in the non-conference season opener, with Mark Jonas in his first game as the team’s head coach, when the Eagles won at Oostburg, 27-0.

Drew Daoust threw touchdown passes to Christian Counard and Zack Lynch, and also ran into the end zone for a score, with Jonas Jandrin adding a rushing touchdown.

Southern Door hosts its final non-conference game Aug. 26 against Lomira, before beginning the conference schedule Sept. 2 at home against Mishicot.

Gibraltar hosts Sevastopol in a non-conference game at Fish Creek. The two teams will also face each other in the regular-season finale in Institute on Oct. 14, when the game will count in the Peninsula Conference standings for eight-player football.

Following their season opener, the Vikings will be back at home Sept. 1 to host a conference game against Suring, while the Pioneers will be on the road that evening for a league game against Gillett.