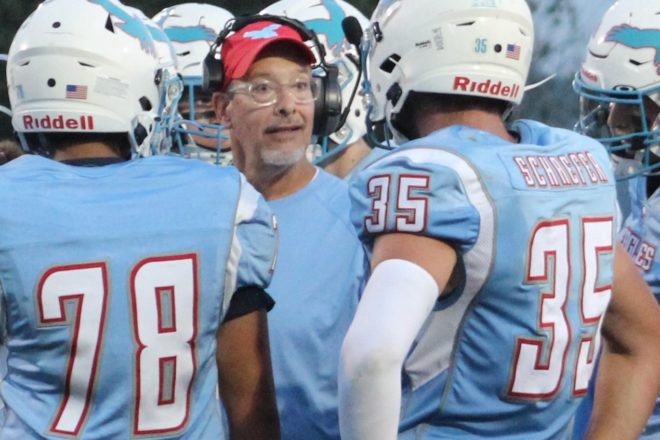 Southern Door tallied only one touchdown Sept. 9, but that was enough scoring for the Eagles to record a 6-0 Packerland Conference home victory over the Bonduel Bears.

After a scoreless first half, Southern Door found paydirt in the third quarter on a six-yard touchdown pass from Drew Daoust to Jack Peterson.

Defensive stops, some of them on turnovers, made for a low-scoring game. The Eagles’ Alaric Urban recorded two forced fumbles, with Derek Schinktgen credited for another forced fumble and Christian Counard tallying an interception.

On offense, Daoust completed seven of 13 passes for 72 yards with a touchdown and two interceptions. Peterson accounted for 44 of those receiving yards on four catches.

The majority of Southern Door’s 188 rushing yards came from Zack Lynch, who ran for 122 yards on 21 carries.

The victory kept the Eagles undefeated on the season at 4-0 overall and 2-0 in conference play. Southern Door plays its first Packerland road game of the season Sept. 16 at Marinette.

Clippers Back on Even Keel

Danny Lodl completed 12 of 19 passes for 260 yards and three touchdowns, with Kaden Lettie, Patrick Haese and Bryce Plzak each recording a scoring reception for Sturgeon Bay.

Haese also ran a kickoff back for a touchdown, while David Zuehlke and Mason Sacotte added rushing touchdowns for the Clippers.

In its first road game of the season, Gibraltar reached a goal Sept. 10 by defeating an eight-player football team it hadn’t won against in several years with a 42-8 Peninsula Conference victory at Algoma.

Brady Kita, who completed six of seven passes for 104 yards, threw scoring strikes to Braden Sitte and Will Friedenfels and also ran for a touchdown. Rylan Caldecott, Hayden Reetz and William Lecy added rushing touchdowns for the Vikings.

Gibraltar outgained the Wolves in total offense, 377 to 118 yards, with Algoma only recording six yards through the air.

Reetz led the Vikings in rushing with 86 yards on 17 carries. Kita added 76 yards on six carries.

Gibraltar (3-0, 2-0) will put its undefeated record on the line Sept. 16 with a home conference game against Wausaukee.

Pioneers Shut Out at Home

Sevastopol wasn’t able to get on the scoreboard Sept. 9 when the Pioneers lost their home opener to Peninsula Conference opponent Lena/St. Thomas Aquinas, 36-0.

The Pioneers (1-2, 1-1) will seek to get back on the winning track Sept. 16 with a conference road game against Oneida Nation/NEW Lutheran.