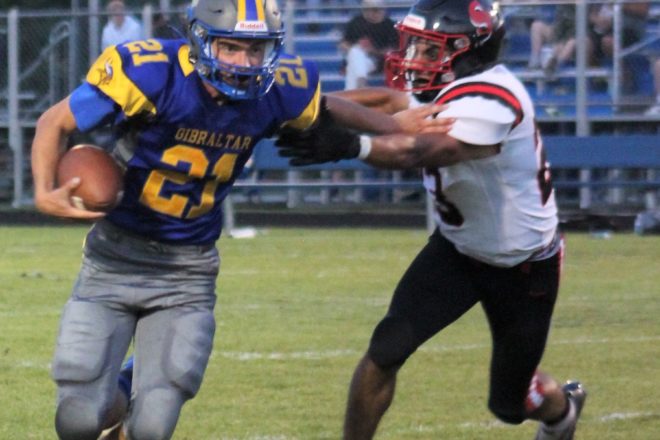 Giuseppe Mercier’s three-yard touchdown run got the Vikings on the scoreboard 3:02 after the opening kickoff to cap off an 80-yard drive.

Gibraltar extended its 7-0 lead after the first quarter when Caldecott ran for two scores and then hauled in a 48-yard touchdown pass from Brady Kita with 21 seconds left before halftime.

Kita threw two more scoring strikes in the second half to Braden Sitte and Will Friedenfels.

The Vikings were on the verge of shutting out their nearby rivals in the final seconds when Sevastopol’s Alex Andreae recovered a blocked Pioneer field goal attempt behind the line of scrimmage and ran it into the end zone for a touchdown.

The two teams are scheduled to face each other again in Institute on Oct. 14 when their regular-season finale will count toward the Peninsula Conference standings.

Gibraltar had another home game scheduled for Sept. 1 against Suring to begin conference play, prior to the first road game of the season Sept. 10 at Algoma.

Sevastopol had its first conference game scheduled for Sept. 1 at Gillett, prior to the home opener Sept. 9 against Lena/St. Thomas Aquinas.

Southern Door closed out its non-conference schedule Aug. 26 with a 46-12 home victory over Lomira.

Eagles quarterback Drew Daoust threw three touchdown passes, two to Jack Peterson and another to Derek Schinktgen, and also ran for a score.

The Eagles, who improved their season record to 2-0, had their first Packerland Conference game scheduled for Sept. 2 at home against Mishicot on Parents Night, followed by another home conference game Sept. 9 against Bonduel.

In the closest game involving one of Door County’s football teams Aug. 26, Sturgeon Bay lost for the first time this season in a home non-conference game against Antigo, 21-14.

The Clippers, whose season record dropped to 1-1, had their first Packerland Conference game scheduled for Sept. 2 at Bonduel, prior to a home conference game Sept. 9 against Marinette.