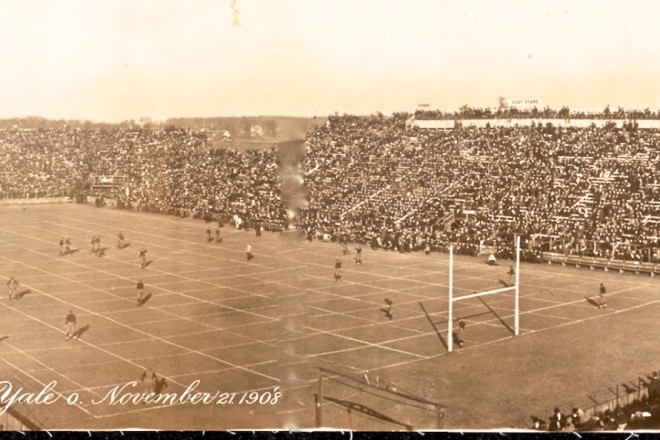 Due to strict passing rules following the advent of the forward pass in 1906, football fields resembled checkerboards with 5-yard squares to assist officials. Quarterbacks were required to move 5-yards to their left or right before attempting a pass.

The NFL’s Super Bowl reaches a major milestone this weekend. The Carolina Panthers will take on the Denver Broncos in the 50th showdown between the NFL’s best, dating back to 1967 when the Green Bay Packers defeated the Kansas City Chiefs in Super Bowl I.

Super Bowl 50 (not “ Super Bowl L”; the NFL will return to roman numerals next season) will feature Peyton Manning, arguably one of the greatest pocket-passers in NFL history and who some believe will play in his final game this Sunday after a hall of fame career.

Perhaps his career would have taken a different route had it not been for a Sturgeon Bay native born 139 years earlier. Yes, a bit of a stretch, but truth be told, Eddie Cochems of Sturgeon Bay has been widely credited as football’s “father of the forward pass.” 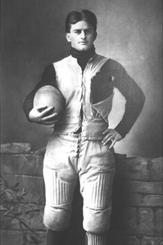 Sturgeon Bay native, Eddie Cochems, was a football pioneer who is widely credited as being the “father of the forward pass.” Photo credit: UW-Madison, 1900.

Edward Bulwer Cochems was born in Sturgeon Bay, Wis., on Feb. 4, 1877. Among his 10 siblings was a twin brother, Carl, who became a renowned opera singer and an elder brother, Henry, who shared Eddie’s football passion as well as a strong interest in politics. In fact, Henry Cochems was an aide to former President Theodore Roosevelt, and assisted Roosevelt, who was shot in an assassination attempt in Milwaukee in 1912.

Eddie Cochems followed his successful collegiate career at University of Wisconsin – Madison, where as a three-sport athlete and as a halfback helped the football team to a 35-4-1 record during his time playing, by becoming the head coach at North Dakota State University for two years. He returned to UW-Madison as an assistant coach, but came up short of receiving the head coaching position. He was then hired as the head coach of Clemson in 1905 for one season before heading to St. Louis University to serve as the team’s head coach in 1906. This is where he would leave his footnote in football history.

On Sept. 5, 1906, in a road game against Carroll College in Cochem’s home state of Wisconsin, the first documented forward pass and completion took place. St. Louis quarterback Bradbury Robinson threw an incomplete pass, which ended their possession earlier in the game. However, Robinson later connected with Jack Schneider for a 20-yard completion on the following drive, which he ran in for a touchdown. This would go down in football history as the first pass attempt, completion and touchdown pass.

The forward pass was legalized that year, but the passing rules were far different and more strict. In an attempt to make the game safer, the forward pass was seen as an opportunity for teams to go to the air, and theoretically limit player injuries.

Early rules stated that an incomplete pass or completion less than five yards on any down would result in a turnover. Any passes caught in the end zone resulted in a touchback, rather than a touchdown. Pass attempts had to be attempted to the left or right side of the field. The playing field was designed in checkered squares, and the quarterback was required to move five yards in either direction before throwing. Pass interference penalties were nonexistent. Additionally, the oversized, oddly-shaped football proved to be extraordinarily difficult to throw. 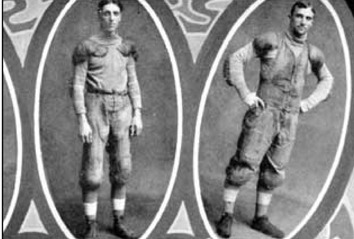 Through the years, rules were changed as was the size and shape of the football to better suit the needs of passing teams. Cochems sought to revolutionize the passing game under the new rules and found much success in doing so. He finished his three-year coaching stint at St. Louis with a 25-5-2 record, largely in part to his innovative offense using the pass. His 1906 squad went 11-0, led the nation in scoring, and outscored opponents 407-11. After stepping down in 1908 from St. Louis, Cochems returned for one season in 1914 to coach Maine to a 6-3 record. Cochems ended his college career with a 43-11-3 record as a head coach.

He remained active in the football community while continuing to promote the passing game and served as a strong advocate of the forward pass as well as a game official who looked to further revise the rules of football. He strongly advocated for the redesigning of the football to make it easier to throw and more aerodynamic.

Of course, with all stories of “firsts,” his does not come without disputes. There are claims of others being the first to throw a forward pass under the new rule in 1906. It was argued that several teams experimented with the forward pass that season, yet it failed to catch on with most. Most historians agree that whether or not Cochems “invented” the forward pass, it is certain that he used it to its potential, and his teams were able to find success using it, although few others did using his style of play. 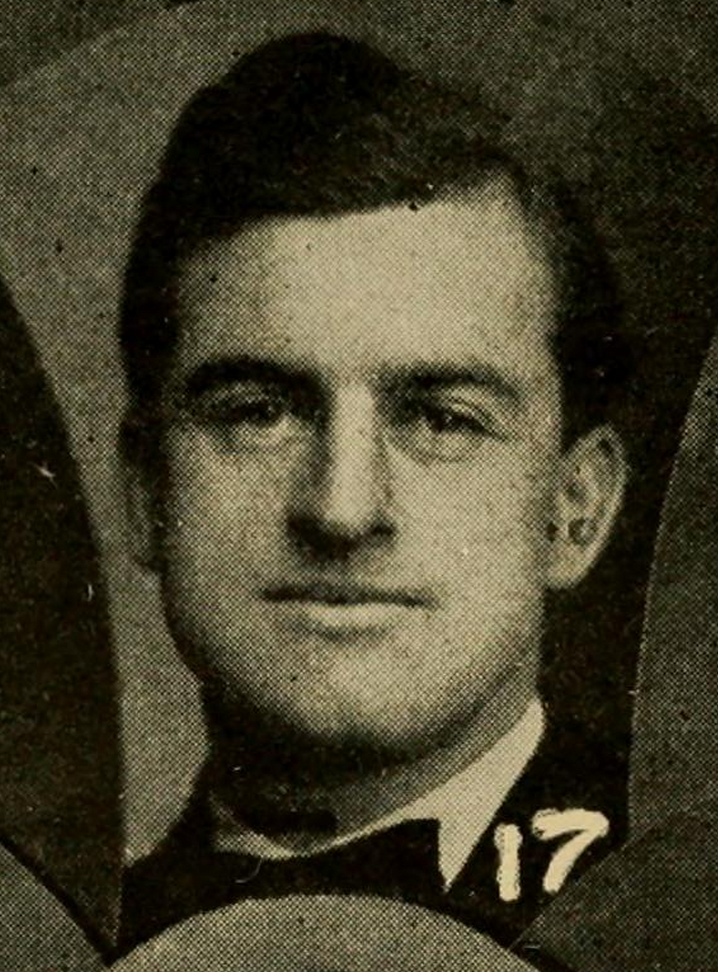 Cochem’s contributions became largely overshadowed as years passed. Legendary Notre Dame coach Knute Rockne, who was often seen as the inventor of the forward pass several years later, acknowledged Cochem’s role. Cochems was inducted into various hall of fames and credited by many for his contributions to football.

The evolution of the passing game was inevitable. Football as we see it today is quite different from just a few decades ago, not to mention from more than 100 years ago. With the likes of Manning, it brings to mind my favorite quarterback, Brett Favre, and all that he accomplished with his forward passes. Who would have thought that a young man from Sturgeon Bay, Wis., would have his hand in that?

As we watch this year’s Super Bowl, I will stop and think about what Sturgeon Bay’s Eddie Cochem would think if he were on hand to witness it. I am certain he would be in awe of what the passing game means to football today.