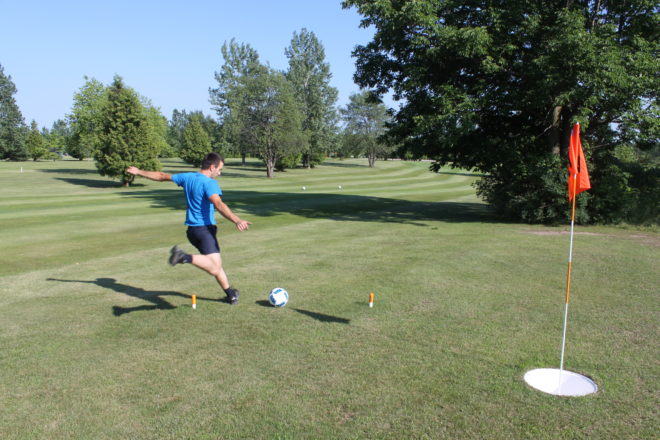 In the roughs of Stonehedge Golf Course sits 18 holes of footgolf, a new sport that combines soccer with golf in just 500 courses across the country.

“Most of the older golfers look at it like, ‘What the heck is this?’ but they’ll get used to it,” said Jon Oswald at Stonehedge. “They mix in pretty well with the golfers, that’s why there’s two footgolf holes on every fairway, so they can go out at the same time.”

Players line up next to the fairway of the traditional golf course and kick the ball toward a pin that is usually 100 to 200 yards away. The pins are marked with flags and 21-inch-wide holes.

“You want to follow the same golf rules etiquette-wise,” said Oswald. “It plays to the same rules as golf so you’re counting your own strokes.”

Beside the use of soccer balls and the size of the pins, everything else in the sport is the same and the American FootGolf League (AFGL) strictly lays out the rules.

The AFGL recognizes courses across the country, and the course at Stonehedge stretches more than 2,063 yards with a par of 63.

“[The AFGL] has been around since 2011 when they got organized and more and more people are talking about it at the golf shows,” said Oswald. “A couple of friends of mine and other guys have put it in and they’re doing real well with it.”

For Oswald, it’s encouraging to see younger players out on the fairways, even if they aren’t playing traditional golf.

Through Labor Day, the footgolf course at Stonehedge opens at 3 pm and costs $12 per person. Players can rent a soccer ball for $3.