When Leona Lysne’s son used the tap water at his parents’ Town of Egg Harbor home to mix formula for his three-month-old infant last September, there was no indication that he was mixing with toxic water.

Less than a week later, he was making a gut-wrenching phone call to his parents, Paul and Leona Lysne. His baby daughter was extremely ill and for more than a week experienced severe diarrhea with mucus and blood in it. 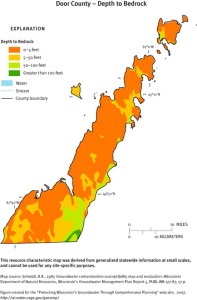 Much of Door County, including the area where the Lysne’s live in Jacksonport, has very little topsoil, allowing bacteria to contaminate the groundwater quickly after rain events.

Naturally it was a shock to Paul and Leona, whose 15-year-old Fairview Road home had recently been added to the list of available rentals through a Door County vacation rental company. Per their contract with the company, the couple was required to have their well water tested annually – a test that came back safe in 2013 and again in July 2014, just two months before their granddaughter became ill.

That all changed in early September when the Lysnes’ son brought his family (his wife and three-and-a-half month old daughter) and another family to stay at their home for a weekend. The group left late in the day on Sunday, and just a few days later, Leona Lysne received the phone call from her son.

“He found out from their public health nurse that she had been affected by Campylobacter jejuni as well as E. coli that was determined to be from a bovine source,” Leona Lysne recalled. “He also told me that the other couple, whose wife is a physician’s assistant, and their 10-year-old son were also sick. He said, ‘Mom, you need to get your water tested.’”

According to the United States Department of Agriculture Food Safety and Inspection Service website, C. jejuni is a microaerophilic bacterium responsible for many diarrheal illnesses in the United States and is commonly found in the intestinal tracts of animals, including poultry and cattle, and in untreated water.

Leona and Paul Lysne acted fast, contacting their plumber to draw a water sample that was tested at a state-certified testing facility. In a matter of days, the test results came back positive for E. coli and coliform bacteria (organisms found in the environment and in the feces of warm-blooded animals and humans).

In the meantime, Paul became very ill with the same symptoms as his infant granddaughter. It took three weeks to recover. The couple’s two German Shepherds also became ill and within less than two months, the older of the dogs died.

The couple’s plumber suggested the couple call the Department of Natural Resources (DNR), which they did on Sept. 23, and within days, the DNR sent staff to their home to collect several quarts of water.

Incidentally, the DNR was aware of a data collection effort in the Door County area by the U.S. Dairy Forage Research Center being led by microbiologist Mark Borchardt. The research center, which can distinguish human fecal contamination from manure contamination, was collecting data for a research proposal. The DNR staff informed Borchardt of the well contamination issue at four contaminated wells in the Egg Harbor township, of which the Lysnes were included.

“It allows us to demonstrate that we can distinguish human wastewater from dairy manure contamination in groundwater,” Borchardt said. “So many people think that that technology is not available and that’s not true. It allowed us in that site under those conditions to demonstrate that, and that’s what we included in our research proposal.”

Borchardt and other USDA researchers sampled four wells in the area, three of which were positive for bovine manure contamination.

“The amazing thing is that some of these wells were chlorinated one or two times before we even sampled so it’s amazing we found anything at all,” Borchardt said. “ … The well that was closest to the manure-applied field was positive for four different microbes that are specific to cattle and two of those had really high concentrations … that well was positive for the bacteria and the pathogen called Campylobacter jejuni.”

Although Borchardt said the source of the contamination was unable to be linked to a specific farm, it would soon come to light that in the week leading up to the family’s illnesses, Egg Harbor township’s Haberli Farms spread liquid manure on several fields surrounding their property. Subsequently, a subcontractor for the farm was cited after improperly spreading liquid manure over a sinkhole Sept. 8-9, contaminating neighboring wells.

According to Ed Culhane, public affairs manager for the Department of Natural Resources, the first complaint the department received regarding contaminated wellwater in the Egg Harbor township area came from a homeowner on Sept. 12. A DNR warden responded immediately and advised the family not to use well water for drinking or cleaning dishes. Over time, the manure from Haberli Farms was confirmed to have contaminated a dozen wells.

While the Lysnes often smelled manure in the area after spreading, their water had no odor or color.

“There wasn’t anything about it that would alarm you,” Leona said.

Unfortunately, that isn’t an unusual circumstance.

“Contamination occurs on the microscopic level and you can definitely have water that is contaminated and that is not safe for drinking without any obvious signs of contamination,” Culhane said.

So began a five-month-long process of asking questions, researching and figuring out what options the couple had. The Lysnes said they were forced to cancel a rental in October and close to renters for the remainder of 2014 until the issue was resolved. They also canceled family holidays at the home.

They used bottled water for nearly everything and when they had no choice but to use well water (in the dishwasher, for example), it was accompanied with bleach. Soon they met many other people whose wells had been contaminated and educating themselves on Door County’s landscape.

“Ignorant, we started educating ourselves about Door County’s karst topography, karst landscape and karst aquifers and began to more clearly understand how the contamination occurred, along with the additional effect weather has on the situation,” Lysne said. “In other words, learning that sinkholes, rocky outcrops, exposed bedrock, and fractured bedrock covered by thin layers of soil are rapid conduits to our aquifers when covered by liquid manure, especially after unusually heavy rains followed by more rain after the spreading.”

Paul and Leona Lysne began attending meetings to educate themselves on how to deal with the contaminated water, and were presented with two options: drill a new well or install a water treatment system.

They opted for the water treatment systems (an ultraviolet water purification system as well as a reverse osmosis water filter system), which was installed Feb. 2, 2015, nearly five months after the contamination. The treatment systems were paid for through Haberli Farms’ insurance company.

“Digging a new well, to us, did not guarantee that it too would not hit contaminated water. You’re looking at probably $20,000 so that was your choice,” Lysne said. “The well might not solve your issues.”

The Lysnes have continued researching the county’s land management plans, rules for spreading manure, and the unique issues that come with karst topography.

They plan to rent out their home for the coming season and in the meantime, will continue educating themselves and their neighbors while pushing for stricter regulations on land use.