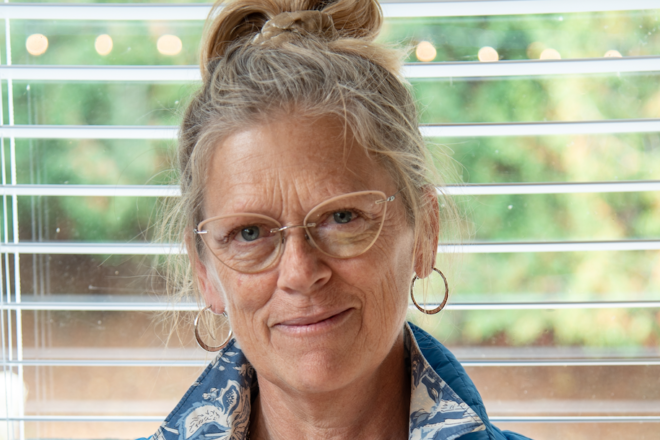 Kristen Peil said she was born an old soul.

“I’ve always gravitated to older people and older things, and I blame genetics for that,” she said. “My mother, Annie Peil, had the antiques business Orphan Annie’s, and when I was a little kid, she dragged me to auctions all over Door County. Those auctions introduced me to others on the Peil side of my family who were out collecting history, too. Both sides of my family are history lovers.”

In 1976, Annie Peil compiled Here’s to the Way We Were, a pictorial book about Baileys Harbor’s past that also included comments from residents who remembered the early years. Peil and her husband, Caleb Whitney, would like to expand the book someday.

“I have learned that history is always hiding in plain sight,” Peil said. “It reveals itself as you go through life and discover new ways of seeing it. Maybe that’s because maturity bestows a perspective that leads to a better understanding. Or maybe it’s due to technology that helps you see details that were previously obscured.

“It may even be revealed by new people who bring a fresh set of eyes to a neighborhood, helping you to see it all anew, and giving you the opportunity to look deeper. It’s all out there, and it’s so exciting when new bits of it are revealed.

“It is even more exciting when you get to share the exploration and discovery with others. I like that unraveling history can engage all age groups. It feels like family when you spend time working together toward a common goal.”

Since 1994, Peil and Whitney have lived in a Baileys Harbor house built in 1883 by a daughter of Moses Kilgore, one of the town’s earliest settlers. It has taught Peil a lot.

“I’ve learned that there is never just ‘one story,’” she said. “There’s always something else to learn. That’s been true with our house. I thought I knew its history, but when I’ve talked with others, I’ve learned so much about the families who lived here.

“And I’ve learned that one plus one doesn’t always equal two. Different interpretations may mean one plus one equals three. Whether it’s an event, an object or a person, there’s always something more to learn. History is like a scavenger hunt. The more you know about how something – a house, technology – got to where it is today, the better you can understand it.

“One reason history is important,” Peil said, “is because it informs so much about ourselves. If you take the time to look back at what and who came before you – the mistakes they made, the successes they had, the risks they took – it explains why they did what they did, and it brings us to who and what we are today.

“A perfect example is my great-grandmother, Hedwig Peil, who wanted to come to America, so she took the risk of immigrating here to marry a complete stranger. If I didn’t know that story about my family history, I think I wouldn’t have the same understanding of why I’m a risk taker. If people can understand why they’re doing what they’re doing, it helps them feel better in their own skin.

“I think this is one reason I’ve always been drawn to older people: They’re usually comfortable with who they are. They’ve lived through so much and experienced so much that they’re joyful just to be where they are. It’s easy to feel comfortable with them.

“I believe an appreciation of history can give us a more positive outlook on life – a chance to look at everything that’s gone before and realize our life is pretty good.

“Also, those who study and know history are more multidimensional people. They look at things from 360 degrees, not just moving straight ahead.”

An example of what Peil and Whitney have learned from history is how to keep it alive. In 2016, they purchased the almost-100-year-old Baileys Harbor schoolhouse from Peil’s parents, Loren and Annie Peil, who had converted it into a seven-room inn. Peil and Whitney’s daughter, Ida – the fifth generation of her family in Door County – manages the inn when she’s not away at college.

They enjoy sharing the community’s history with their guests and anyone who happens by through the displays they’ve created throughout Baileys Harbor and the book they’ve published about the first 100 years of the schoolhouse’s history.

“People are curious and ask questions, and I love being able to share and include them,” Peil said.