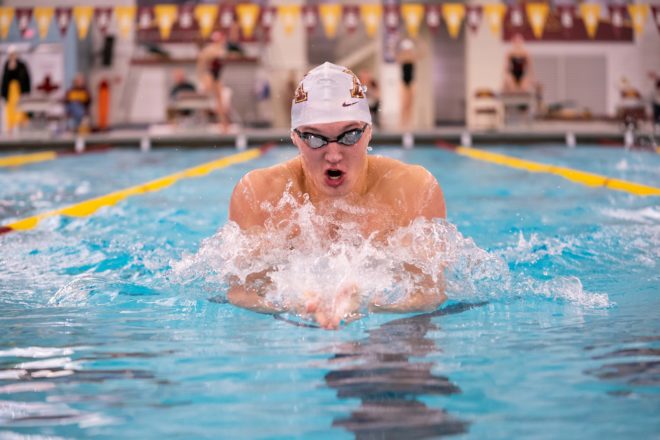 Max McHugh had his season cut short before the NCAA championships. Photo courtesy of University of Minnesota/Brad Rempel.

Stories of the COVID-19 virus ending promising sports seasons prematurely have become regular topics of conversation during the last few weeks. The National Collegiate Athletic Association – taking a lead from the National Basketball Association and the National Hockey League – decided on March 11 to cancel all of its winter and spring championships.

Many have agreed with conceding defeat to the COVID-19 virus and the resulting cascade of uncertainty about how severely its ongoing spread will affect public health across the United States. Among them is a Sturgeon Bay native who has seen an outstanding chance at a national championship in swimming eliminated.

McHugh’s season-best time of 1:51.62 in the 200 breaststroke ranks second only to Reece Whitely of California and Tommy Cope of Michigan.

“I was definitely bummed out at first, but looking at the rationale and grand scheme of things, I think it’s the smart thing to do,” said McHugh, who was also named Big Ten Swimmer of the Week three times. “It was inevitable after you started looking at the whole pandemic.”

McHugh punctuated an outstanding freshman year by earning All-American honors after finishing second in the 200 breaststroke and third in the 100 breaststroke at the 2019 national meet. He was also a member of the 400 medley relay that placed 10th.

“Minnesota hasn’t had an individual NCAA national champion in men’s swimming since 1964,” said Kremer, who completed his 22nd season with the program. “Max truly worked himself into position to accomplish something historical this year at Minnesota. We will look to do this next season.”

McHugh, a psychology major, is now busy at home finishing up his semester through virtual learning while beginning preparations to earn a spot at the 2021 national meet, to be held March 24-27 in Iowa City, Iowa.

“Training right now will simply be staying in shape,” McHugh said. “I want to hit the ground running when we finally are back in the water. I still have the same goals and same mindset, and those goals will allow me to stay on course and keep me from getting too distracted.”