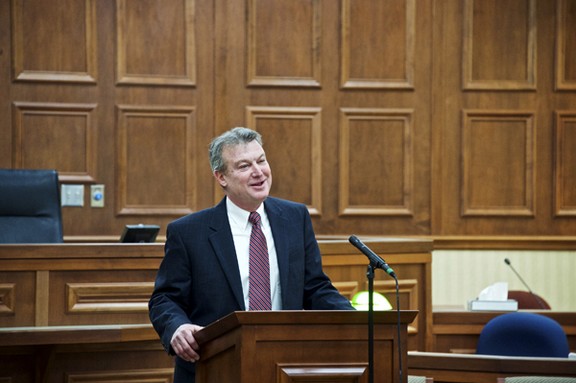 Joel Kitchens had barely warmed his seat in the Wisconsin State Assembly when he found out just how quickly his constituents expected action.

At a Feb. 27 listening session, the new Republican representative of the 1st Assembly District was barraged with criticism from angry citizens frustrated by the lack of action to address groundwater contamination in Kewaunee County.

“Nobody wants to be patient,” he said, recalling the session at the Sturgeon Bay Public Library. “I wouldn’t want to be in the position that many of these homeowners are in, but I can’t tell them it’s going to be solved tomorrow either.”

Most of the frustrated residents pin blame for the problem squarely on large-scale factory farming operations. Kitchens heard calls to support a moratorium on Confined Animal Feeding Operations (CAFOs), the large dairy farms that produce more waste than the peninsula’s thin soil can handle in many areas.

“A moratorium, for a lot of reasons, just can’t happen,” Kitchens told them, citing the political realities of life in a state where dairy is king. “But you can add restrictions.”

Kitchens said too much of the discussion is focused on CAFOs.

“They are an issue, but they’re not the only problem,” he said. “I’ve lived in Door County since the early 1980s, and groundwater contamination has been going on for a long time.”

Kewaunee County for many years “was probably too lax” when it came to groundwater protection, Kitchens said. Door County, on the other hand, may be too strict.

“There’s a balance there that we have to find,” he said. “We want to prevent groundwater from being contaminated, but not force farms out of business with regulation. I do think there have been some bad practices in agriculture in the past. I really do see both sides. I do care about the groundwater, but I know the small farmers and see both sides.”

As a rookie assemblyman, he says he doesn’t have the clout or freedom to push for dramatic changes in laws and regulations, and said they would be unlikely to pass if he did.

“In Madison, they’ve heard we have problems in Kewaunee County, but it’s not really a priority outside of a couple of regions of the state,” he said.

Kitchens said that rather than propose doomed legislation, he plans to work for greater enforcement of existing rules while pushing for larger farms to invest in methane digesters to turn animal waste into energy.

As he and his constituents call for greater enforcement, Kitchens finds himself answering for the budget of his party’s leader, which would slash the budget and staff of the Department of Natural Resources (DNR).

“I have concerns about some of the changes in the DNR,” he admitted. “But a lot of the positions were deemed unnecessary. We can refocus teams to get more done with less.”

For constituents who say too little is being done already, that idea is met with skepticism.