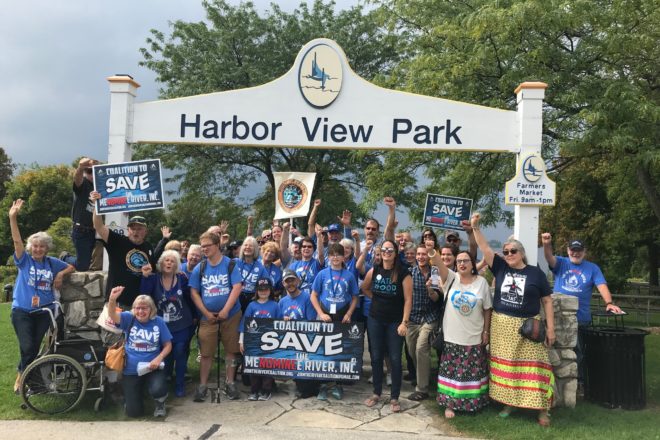 The Coalition to SAVE the Menominee River group joins Door County residents at Harbor View Park in Egg Harbor. The park provides views of Menominee and Marinette directly across Green Bay.

At some point during the summer bustle, I had the occasion to speak with an agitated gentleman who owns a home on the waters of Green Bay in Egg Harbor. He was concerned about air cannons blasting continually on Hat Island across from his home. I envisioned him on the other side of the phone, red-eyed and disheveled from lack of sleep.

“Noise pollution is pollution!” the gentleman sang out over the phone. It was a sentiment I generally agree with, so I provided the usual affirming noises. But suddenly I snapped. My persona shifted into one of an environmental-advocate gangster man: “You want to talk about pollution? I’ll tell you about pollution. What do you know about this pollution?” I felt like I was shaking this man down, but I also felt that he might appreciate a passionate environmental shakedown.

After calming myself for a moment, I asked what he knew about the proposed Back Forty Mine on the Menominee River, a mere 15 miles from his home straight across the pond, and decidedly in his backyard. He responded with a tone that was a blend of disappointment mixed with a dab of guilt. He wasn’t aware of the ill-conceived and potentially disastrous proposed mine – not even a little bit.

Here my distress sets in. How is it that in Door County – a place where you can’t swing a dead cat without hitting an environmentalist or a concerned NIMBYist – a waterfront owner directly across from the flow of the Menominee River is unaware that a Canadian exploration company – which has no experience with mining – is developing plans that, according to an op-ed titled “Wisconsin Could Face a Mining Disaster” penned by Dr. Al Gedicks, “would produce 70 million tons of acid-producing waste rock and milled tailings”?

The op-ed continues: “When sulfide minerals in mines and mining wastes are exposed to air and water, the chemical reaction produces sulfuric acid and metal pollution known as acid mine drainage (AMD). AMD is toxic to fish and wildlife due to dissolved metals and contaminants such as mercury, lead, arsenic, cadmium, zinc, copper and many others. These contaminants would threaten the Menominee River and eventually Lake Michigan, the second largest of the Great Lakes, which are the largest sources of fresh water on earth.”

Regrettably, I believe the answer is one of geography. The Menominee River is comparatively no farther than Egg Harbor is to Sturgeon Bay, and closer than Forestville is to Sturgeon Bay. It’s close – so close that there are confirmed stories of some crazies walking across the bay a few years back from Egg Harbor to Menominee – during the winter, of course.

I can say with a fairly high level of confidence that if this mine were proposed anywhere on the Door County peninsula, there would be opposition far exceeding any knock-down, drag-out battles to save granaries, bridges or lookout towers; oppose RV parks; or you name it.

We are being lulled to sleep by geography, but here’s the thing: water –  especially less intellectual polluted water – does not understand political boundaries. Dumb, polluted water is the foulest of all the waters.

There have been some efforts to raise awareness of the Back Forty in Door County, but I fear they are competing with the more in-your-face environmental causes and concerns in the county.

So, now that you know … What can you do?

• Contact the Coalition to Save the Menominee River through its social media and website. Please also consider donating to its cause with time, talent or money.

• Contact me at [email protected] to ask that I attend a meeting of your condo association, local government, neighborhood or any other type. I or someone else will attend, and I will do so in my professional capacity, enhanced by my personal passion for protecting our water. Egg Harbor without a clean and vibrant Harbor becomes just an Egg.

• Contact your elected representatives at the local, state and federal levels to let them know you’re opposed.

And know this: Aquila does not have all necessary Back Forty permits.

As of Oct. 6, 2019, only one of five required permits has been both issued and deemed “effective.” Therefore, it’s not too late: This mine is not a done deal.