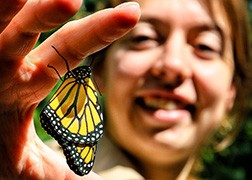 Certification was one component of a grant received from Friends of Wisconsin State Parks, with a match from Peninsula’s Friends group. Monarch tagging supplies, new insect and sweep nets, butterfly teaching supplies, and a monarch costume were also purchased with grant funds. The grant also funded supplies for two healthy outdoor cooking demonstrations.

Habitat loss in monarch wintering grounds, climate change, and change in farming practices (fewer places for common milkweed to grow) are reasons why monarch populations are declining. By providing suitable space for milkweed and other native plants, Peninsula’s Nature Center meadow is a positive response to a disturbing trend.

Note: Always wear gloves when removing spotted knapweed by hand, pulling the root, and disposing of the plant in the garbage so seeds cannot disperse. Because of this effort, there is a marked decline in the meadow’s knapweed population, and an increase in milkweed – a favorite of monarch caterpillars.

For more information about Monarch Waystations, or to get involved in monitoring and tagging butterflies, visit monarchwatch.org or contact Kathleen Harris at [email protected] or 920.868.3258.