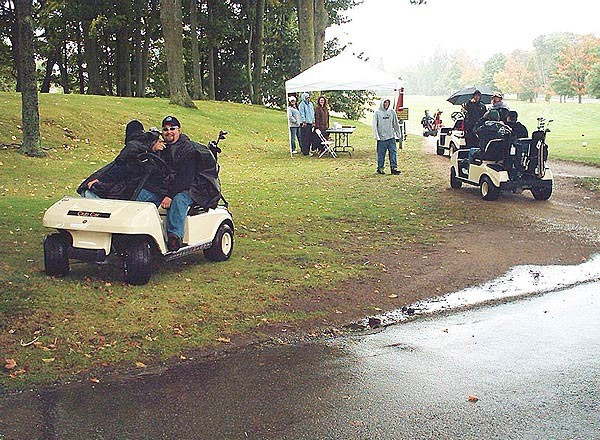 Beautiful golf courses are a part of Door County’s landscape. There are 153 holes to be played at any given time during the season with more being built all the time and, on a good day, there are people playing on most of them. Golf has become a huge business since Tiger took center stage a few years ago and it attracts enthusiasts to the peninsula. Many area courses have found a way to take advantage of people’s love for golf to benefit local organizations. As such, charity golf events have become part of the community’s summer schedule.

As most are aware, the summer season is all too short and both businesses and non-profits scramble to make the most of just five big months. There is at least one event going on almost every weekend that the season allows. Events are fun-filled and most often have a dinner and/or an auction following the golf game.

Jim Sarkis of Door County Charities Golf Classic takes a look at the requests that come across his desk and decides which two local charities will benefit from his annual outing. The lucky recipients then receive the donations from his event for three full years. Jim has been putting on this event for more than six years, five of which it has been held at Horseshoe Bay Golf Club in Egg Harbor. Jim’s event is maxed out at 128 golfers and 50 sponsors every year. Some local recipients include Peninsula Preschool in Ephraim and the Sunshine House of Sturgeon Bay. Local celebrities such as Green Bay Packers President Bob Harlan are among the attendees at this invite-only event.

Orie Milton, Director of Sales and Marketing at Horseshoe Bay Golf Club says that they put on four major events every season and that they would “like to do more.” All of their events benefit local organizations, including The United Way of Door County and Big Brothers/Big Sisters. All of the events require that the course be closed for a large portion of the day to accommodate the volume of players. There is a flat rate given to the organizations who then decide what to charge the golfers.

Every year in September, Maxwelton Braes holds the Johnny G. Golf Scramble to benefit the Johnny G. Scholarship Fund, a tax-exempt organization that provides scholarships to children of single-parent families from Gibraltar High School. With 144 golfers teeing off, every year the course is filled. I happen to be on the board of this particular organization and helping with this event every year since it started in 2002 has been a privilege. We start with a small group of volunteers and somehow pull together a great day of golf, food, music, and door prizes – in the end everyone has a wonderful time.

There seems to be a sense of camaraderie that comes from so many people joining together for a common cause. Not only do you get a great round of golf and the chance to meet new people, but the organization also positively benefits from the exposure.

There are several different venues for these events that range from the laid back BBQ style of the Johnny G., to the more formal, sit-down event of Door County Charities at Horseshoe Bay. Thanks to volunteers and local businesses who donate tirelessly to these events, live and silent auctions are a regular feature after the round of golf to allow participants to bid for a wonderful massage or gift certificates to local restaurants.

Most outings are in the “scramble” format which means that in teams of four, all four golfers play from the same place wherever the “best ball” lands. This ensures that players move quickly through the course as the average time for a round of 18 holes is about four hours. Players show up, rain or shine, as we found a couple of years ago at the “Johnny G” scramble when it poured the entire four hours! Even soaked to the bone, the golfers managed to have fun and keep a sense of humor.

With so many worthy causes in the area, there is a lot of competition to keep people involved in local charities. Golf events are just one way to bring people together to have fun, while giving them the opportunity to do something great for their community. There are many ways to become involved with the valuable non-profits in Door County, but gearing up for a day on one of the beautiful courses in our area certainly seems like the most fun.