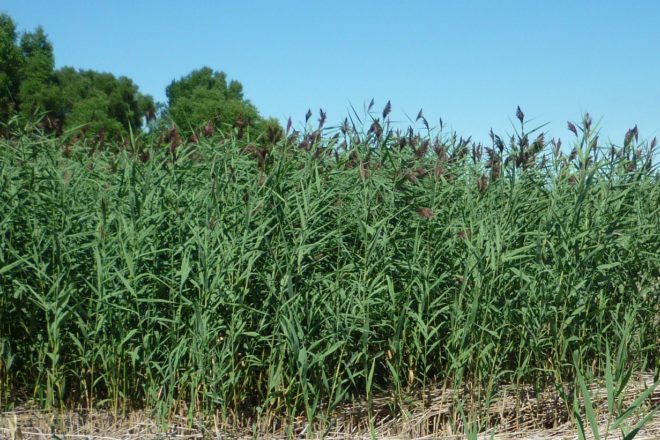 The Town of Forestville on Tuesday became the eighth municipality in the county to adopt a noxious weed ordinance since the Town of Union first instituted an ordinance to control phragmites in 2008.

Town Chair Roy Englebert filled in Supervisors Larry Huber and Jason Tlachac on an Oct. 12 meeting he attended that was held by the multi-agency partnership known as the Door County Invasive Species Team and its focus on countywide efforts to manage invasive plants.

Englebert explained – as it was explained to him and other attendees of the Oct. 12 meeting – that the years 2011 through 2016 were the “golden years” for Door County obtaining funding to combat invasive species, but those grants became more competitive and Door County was ultimately edged out of grants last year, hence the need for municipalities to take a hand in their management through ordinances that impose fines on residents who don’t allow the control of noxious weeds. Forestville’s ordinance calls for a fine of not more than $200. Each day it exists is a separate violation.

But, Englebert added, “It is our intention to never have to enforce this.”

“I hope we get cooperation,” Supervisor Huber added.

The Forestville ordinance identifies four noxious invasive species – phragmites, wild parsnip, Japanese knotweed and common teasel. Supervisor Tlachac volunteered to be the town’s invasive species liaison, meaning he will be tasked with helping to identify the location of invasive species within the town by using a smartphone app and GPS.

The town board also considered an ordinance creating an ATV/UTV route through the town and heard from supporters in neighboring communities.

Clay Banks resident Steve Hanson encouraged the Forestville board members to pass the proposed ATV route ordinance because Clay Banks would like to expand its route but can’t do so until Forestville opens a route.

Roger Cherney of the Southern Door Business Association (SDBA) said the route expansion is supported by the SDBA, and that it would connect to the already approved route in the Town of Nasewaupee.

Dennis Rimert, a Nasewaupee supervisor, said their board agreed in August to continue the trail through Nasewaupee if Forestville approved trails and if county Highway Commissioner John Kolodziej allowed the trail to cross Hwy 42/57 at Stone Road.

One person, identified only as Joe, said he was “not exactly” for it because the route would go right past his house. He asked if there was a limit to the amount of noise they can make, but did not get an answer. When he also asked if the ATVs could not use snowmobile trails in the summer, someone said the DNR won’t allow them, to which he replied, “Did anyone ask them?”

The Forestville route would be along Mill Road to County H to Stone Road, which leads to Nasewaupee. Englebert noted that Nasewaupee’s ordinance prevents anyone younger than 16 operating on the route. He recommended against putting that into Forestville’s ordinance because that would then require enforcement. He noted that ATV operators do not have to be licensed or insured.

“I recommend they do have liability insurance or it can be very costly,” he said.

The ATV ordinance passed, but Englebert pointed out that it won’t go into effect until signage – promised by the SBDA – is in place along the route.

He also said, “I hope we’re not making a route from tavern to tavern in Southern Door.”

The town will hold a budget hearing Nov. 21 at 7 pm, followed by a town board meeting.

Krista Lutzke, the conservationist in the Door County Soil and Water Conservation Dept. who is responsible for invasive species, was happy to hear that the Town of Forestville became the latest municipality to enact a noxious weed ordinance.

“I’m hoping to have the entire county on board at some point,” she said.

Since June 2016, Lutzke’s duties have been focused solely on dealing with invasive species in the county, specifically working with municipalities to understand the importance of their buy-in to invasive species management through the local ordinance.

She explained that the county is in a Catch-22 situation concerning outside funding sources for invasive species management. She described 2011-16 as the “golden years” for funding. The county was so successful in combatting invasives that it appears not as dire a problem as some other locations in the competitive funding process. The fear was that all the good work that had gone on during the golden years of funding would have been for naught if the municipalities were not enlisted to continue the fight.

With the drying up of grants, the Door County Invasive Species Team, of which Lutzke is a part, decided to reprioritize their efforts by enlisting the aid of the municipalities by declaring war on certain invasives such as phragmites and wild parsnip.

“Having these ordinances empowers municipalities and encourages land owners to become stewards of the land,” Lutzke said.

She said the municipal ordinances are especially effective in dealing with vacant lots or properties with absentee owners. With the ordinances, municipalities now have the authority to manage invasives on those kinds of property.

“This is catching on,” Lutzke said. “Kewaunee County wants to follow Door County’s model on this.”

Lutzke next has her sights set on getting Gibraltar and Egg Harbor to enact a noxious weed ordinance.