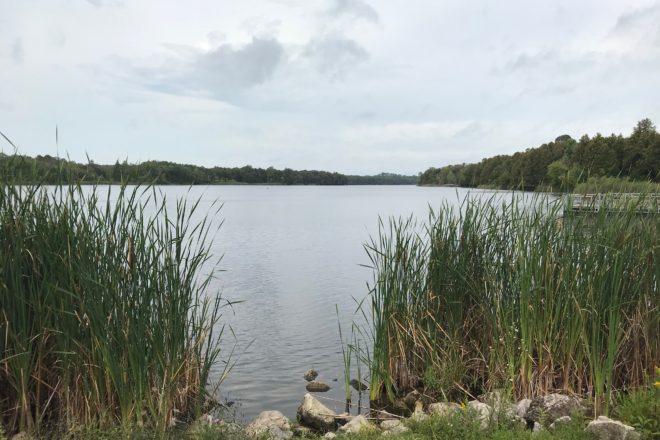 The two-year Forestville Millpond drawdown is just weeks away, and on Sept. 6, the Door County Land Conservation Committee discussed some of the responsibilities for the project.

The plug, so to speak, will be pulled Nov. 1, with the drawdown rate not to exceed three inches per day. The Facilities & Parks Department will be responsible for water-level documentation until the drawdown is complete.

That department will also be responsible for monitoring the sluice valve at least weekly, documenting pooling behind the dam after large storms and making any needed dam repairs. In addition, it will identify potential funding for fish-stocking efforts once the millpond is refilled, which is to begin Sept. 1, 2021.

The Door County Soil and Water Department will have responsibility for monitoring and controlling invasive species on the shoreline, vegetation assessment prior to the refill, and water-quality and water-depth surveys after the refill.

The Wisconsin Department of Natural Resources will monitor discharge water at the beginning of the drawdown, carp control and recommend native aquatic plantings.

The two-year drawdown was the chosen method to deal with problems identified in a 2017 survey of millpond conditions that identified 92 percent of the water body with a depth of less than three feet due to accumulated muck on the bottom, lack of abundance and diversity of native plants, a fish community dominated by carp, and overall poor water quality.

The premise behind the drawdown is that once refilled, the millpond will be deeper and clearer due to compaction and oxidization of the exposed sediment; invasive aquatic plants will be controlled, allowing for improved growth of native plants; and the now-dominant carp population will be reduced.

Residents living on and near the millpond objected to the two-year drawdown, suggesting the county chose it simply as the cheapest option. Some questioned why the county did not dredge the millpond as it has been doing for Dunes Lake. The Soil and Water Department (SWD) learned that granting agencies give a very low priority to funding for impoundments such as the millpond. The cost of dry dredging was estimated to be $2 million; hydraulic dredging of two feet of the millpond’s bottom was estimated at $7 million.

Speaking of Dunes Lake, Greg Coulthurst of SWD announced that grants are coming from a variety of agencies that will allow for the remaining 18 acres of the lake to be dredged beginning sometime after July 1, 2020.

The department recently received a $100,000 grant from Wisconsin Coastal Management, along with a $350,000 match from Ducks Unlimited, a coordinating partner in the project; plus $703,000 from Sustain Our Great Lakes, putting the total at $1.15 million. The estimated cost is $1.2 million, and Coulthurst is confident that amount can be raised.

“It’s finally going to happen,” he said. “It came together quite nicely.”

The first test dredging of two acres was done in 2016, with 8,000 cubic yards of muck removed. Dunes Lake is described as a unique shallow water wetland, which is why Ducks Unlimited – the world leader in wetland conservation – is so gung-ho about the project.

As with the initial hydraulic dredging project, the muck will be extracted from the lake and transported via hose to a dewatering basin.

The committee also heard about invasive-species grants from Krista Lutzke, who was reporting on her final day as the SWD conservationist in charge of invasive species. She was recruited to join the nonprofit North American Invasive Species Management Association, and because she will be working remotely from her Sturgeon Bay home, she will still be involved in some way with efforts to control invasive species in the county. She will be working at a national level on projects that she previously worked on exclusively for Door County.

Lutzke announced a total of $321,367 in grants from a variety of sources to continue the county’s successful efforts at controlling invasive species. That includes two waterless boat-cleaning stations at Pinney and Carmody county parks.

The committee also discussed a voluntary well-testing program for the county that the University of Wisconsin-Oshkosh will coordinate, but the details are still being worked out. We’ll have more on that program next week.