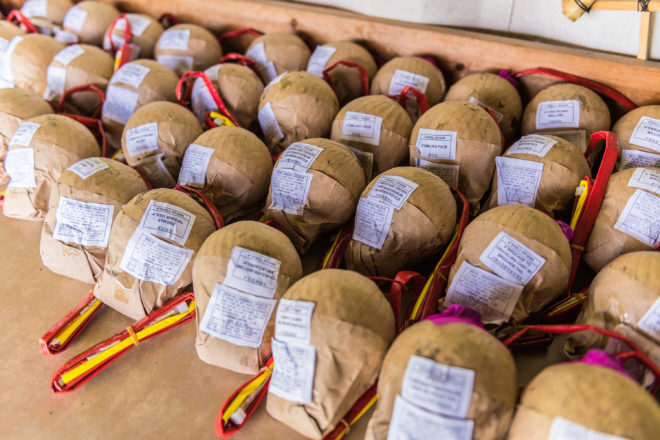 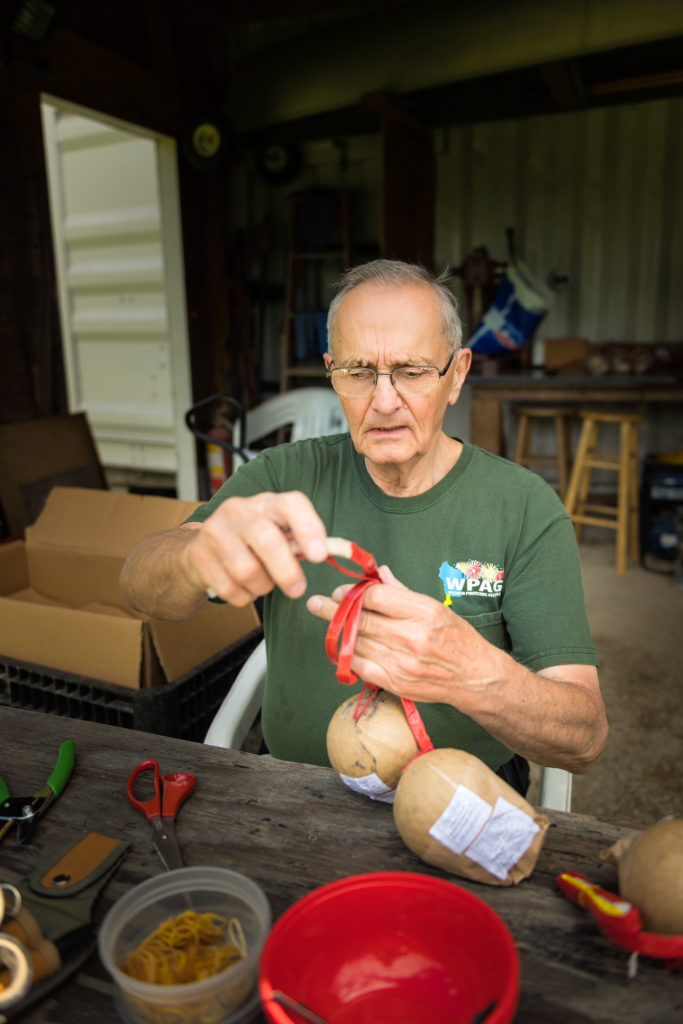 Larry Huber might be the only man in America elected to public office because of the awesome 4th of July firework displays he has put on for the public since 2003 from his 20-some acres in Maplewood.

“Fireworks have always been something that fascinated me, even as a child,” he said. “You buy some fireworks for the 4th of July, maybe celebrate a birthday party or family reunion. It was just a part of my being.”

Plenty of people are fascinated by fireworks, but Huber’s fascination went way beyond oohing and aahing over the effects. He wanted to know how to make them happen.

“My brother loves to shoot fireworks but he isn’t as passionate about how they work. He just wants to light them, and I’m more curious about how do you make that green color?” Huber said.

Understanding how things work has been with him from the start, so not surprising to learn he retired as an instructor in Northeast Wisconsin Technical College’s network specialist program.

“That goes back to my childhood,” he said. “There’s an alarm clock. How does that work? I can take it apart but it might not go back together. Radios. Amplifiers. Computers. Wow! Whatever it was.”

After training, study and certification as a licensed fireworks manufacturer, Huber was able to apply his curiosity in the way things work to create fireworks that make others ooh and ahh.

“I’ll build the shell and shoot it and see what it does. Then back to the drawing board,” he said. “For me, it’s absolutely the way it should be. If I see something, I want to make that. How do I do that? Then I get down to the study of the chemistry and the physics.”

Now his 4th of July fireworks in Maplewood (held on July 3) are a highly anticipated part of the holiday.

“I just do it for the community, and it’s gotten to be real popular, Huber said. “We get hundreds and hundreds of people. The detractors aren’t there any more. I moved it as far south and west as I possibly could.”

The detractors he refers to are some neighbors who objected to Huber’s hobby. 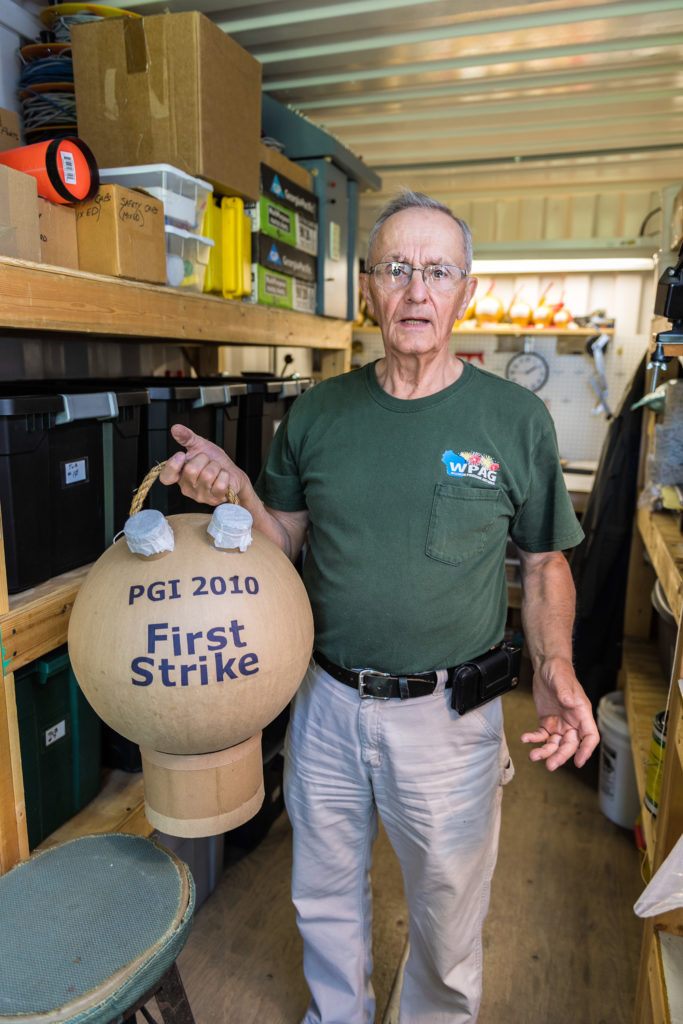 “There were neighbors who were disturbed by the fact that I was shooting off fireworks announced and unscheduled,” he said.

Huber was learning the art and science of pyrotechnics by building and shooting off fireworks to learn how to create various effects.

“I decided to put on a show for the people on the 4th of July in 2003. I put up a nice little show,” he said, laughing as he recalled it. “I really raised attention to myself in the community. And then I leave right after the 4th of July to volunteer at EAA in Oshkosh. I’ve been doing that for 27 years.”

Unbeknownst to Huber, while he was at the annual Experimental Aircraft Association’s annual Fly-In, some of his neighbors showed up at the July meeting of the Forestville Town Board town to complain about his fireworks.

“I came back to find out that a few vocal neighbors had come to a town board meeting and they wanted the town board to put an end to Larry doing his stuff,” he said.

“And then, as a byproduct of that, the following month at the August meeting of the town board, there was a petition supplied to the town chair at the time, Edson Stevens, there were 22 families that signed this petition that said, ‘We thought it was wonderful.’ So you had a couple of people complaining and 20-some people saying, hey, go for it. As was my practice, I always come to town board meetings as an interested citizen. I came to this meeting and found I had a bunch of supporters and a few detractors, and I knew nothing about it. That was the impetus for me to start saying, I’ll do a better job. I talked to the people who were upset. What can I do to appease your concerns? So I moved the location further south and further west to avoid concerns people in the village had.”

He started shooting shows every year for the community.

“And they got bigger and bigger,” he said.

“I was done teaching. Now I have some real time I could devote to my hobby,” he said. “It was at that point I said, I can’t afford this anymore. That’s when somebody came to me and said, you don’t have to quit. Why don’t you get some people to give you some money? That’s when I started soliciting sponsors. The first year I was amazed, I made $700 or $800, which was great, but that doesn’t anywhere near pay for it. As time went on, there were more sponsors. There was more money coming in, which was great. Now I look for money to buy product I can shoot in the air.”

Huber said this year’s show will run on the neighborhood of $3,500 to $3,700, which is a fraction of the cost of most municipal fireworks displays produced by outside companies.

People in the community obviously took note of Huber’s commitment. 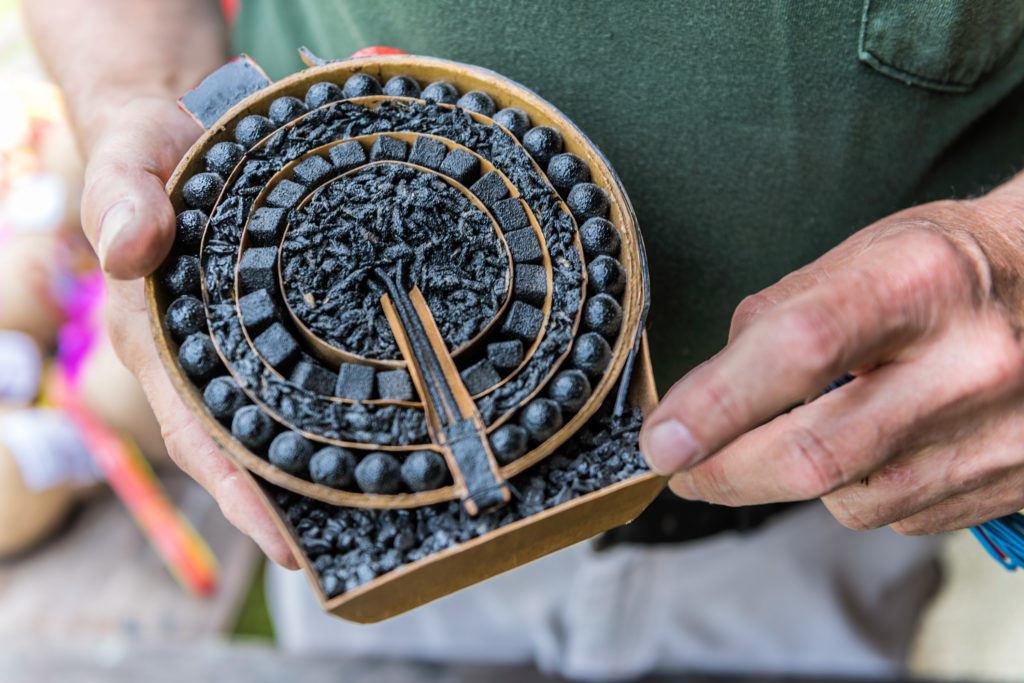 “Somewhere along the way, my supporters decided it was time for me to serve on the town board. I was elected to a supervisor’s position as a write-in candidate,” said Huber, who in April was elected to his third two-year term on the town board. “It was 22 or 23 votes, probably my supporters from the years earlier, wrote in my name. It was not anything I endeavored for.”

But he is happy to perform this public service as a town supervisor, and he takes that just as seriously as he does firework safety.

“When they wrote me in, I thought it would be an opportunity to do some public service,” he said.

While he admits that being a pyrotechnician is “hard and sometimes dirty, stinky work, it’s so rewarding. So rewarding. It’s like any performer, very honestly. You have butterflies. I’ve already got stage fright and butterflies in my stomach. The performance will go on. I have a wonderful family crew and others join in making the show happen. That’s great. After the show’s all over with, I usually spend 45 minutes making sure everything’s safe and cooled off. Now it’s safe to remove something that maybe didn’t go off. Once I’ve cleared the field, others can go in and clear things out. It’s at that point my daughter says, ‘Go, go!’” And he heads to Richard’s Pub & Grill, where he basks in the admiration of people who were awed by his show.

As the past president of the Wisconsin Pyrotechnic Arts Guild and creator of the Hobby Fireworks Maker’s Web Resource for Getting Legal, Larry Huber is all about the safe use of fireworks, and that includes over-the-counter fireworks sold to the public.

“At PGI (Pyrotechnics Guild International) I serve on the safety team. I’m a certified trainer to teach people how to properly use fireworks. There was a lot of interest in being legal, so I created a website and taught seminars. Our goal is to educate in the safe and proper methods of handling fireworks,” he said. “State law 167.10 is real clear in its guidance. If it leaves the ground, if it explodes, you are required to have a permit from the local agency, that would be a village president, a town chairman, or their designee. In today’s world, people buy it and maybe don’t even know they need to get a permit. They just shoot it, and that, to me, is dangerous. There’s no guidance. They have a few barley pops and away we go. That’s a recipe for disaster.”

Huber also mentions a non-firework that is very popular at this time of year – sparklers.

“A sparkler burns at about 2,000 degrees and you give them to little kids. People don’t understand how hot these things are, how dangerous they are,” he said.

A check with municipalities found that very few fireworks permits have been issued to individuals. However, one law-abiding Forestville resident has his fireworks permit in hand according to Town Chair Roy Englebert, and that is Sheriff Steve Delarwelle.