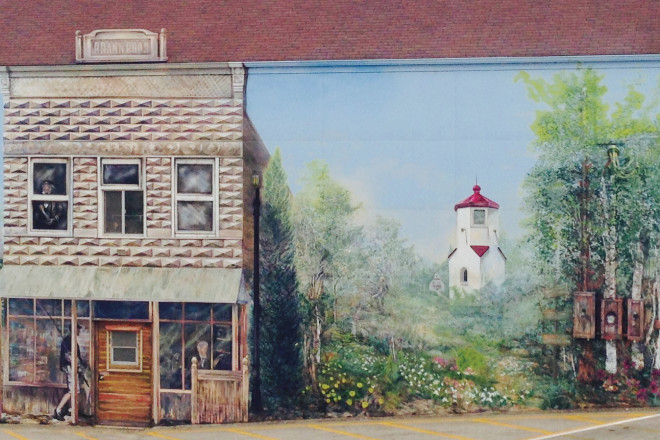 People who routinely drive or walk past the Baileys Harbor Community Mural (as this writer does) should be thankful for countless hours went into its preparation and execution.

The 96-foot by 24-foot mural is on the northern wall of Nelson’s Shopping Center on Highway 57 in Baileys Harbor. The mellow blues, greens and browns blend seamlessly into its backdrop of building, sky and Lake Michigan. The seamless fit was imperative for the mural’s Sturgeon Bay-based artist, Ram Rojas.

“I want it to fit in the surroundings gracefully. This is important to me – timeless elements of composition. I didn’t want it to be bright and gaudy, and I was thinking of the locals – they have to look at it every day,” said Rojas. 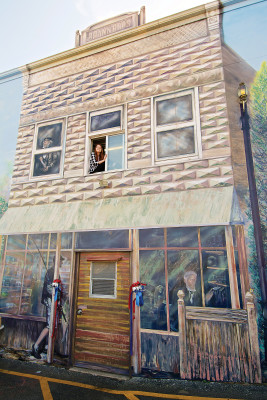 This project and the composition were inspired by a poem written by Lorine Niedecker, an unassuming poet from Fort Atkinson, Wisconsin. Her poem “Wintergreen Ridge” – also the title of the mural – was written after a visit to The Ridges Sanctuary in Baileys Harbor during the late 1960s.

“The project started to coalesce in early 2012, but for two years prior I had been goaded by contacts in Fort Atkinson that there should be a memorial to celebrate Lorine Niedecker because she wrote a major poem, ‘Wintergreen Ridge’,” explains Nancy Rafal, mural project coordinator.

Rafal met Rojas by chance at the dedication of the Schoolhouse Mural at The Clearing Folk School in Ellison Bay, also created by Rojas. “I talked to him at the dedication,” says Rafal, “and gave him some of Niedecker’s work.”

After reading Niedecker’s poetry, Rojas was committed to the project. “I love what I do and was very happy to do this commission. Lorine Niedecker became my hero. She lived in another world of beauty, words and rhymes,” said Rojas.

He continues, “The poetry of Lorine Niedecker is another level. It’s like a piece of classical music or jazz:  you don’t get it at first, but getting deeper and deeper into ‘Wintergreen,’ the deeper my understanding.

“The Range Light, the way the mural flows from the right-upper to lower-left corner is poetry,” Rojas explains of the connection between the poetry and the mural.

In addition to the poem influencing how Rojas thought through the composition, he also painted lines from “Wintergreen Ridge” into the mural. 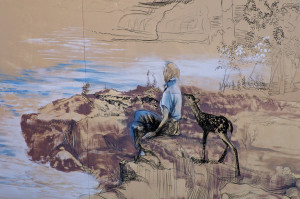 “I loved the way Ram has incorporated Lorine Niedecker’s words,” said Rafal. “Of course I’m projecting, but she would be happy to see that her words aren’t over the top. It’s so subtle.”

The composition took extensive planning and thought to achieve what both Rafal and Rojas were hoping for the mural. Rojas said, “The Ridges Sanctuary was a key element of the poem, and from there I had to work with what I had:  certain lighting, positions toward the bay and the position up a hill, and working with the door, window, electrical posts.”

When choosing the subject matter, Rojas conducted research and collaborated with Rafal about subjects that would best represent Baileys Harbor. He felt a responsibility to the town, visitors and locals to do justice to the town’s history. Rojas said, “I needed the important elements to represent history. It wasn’t a historical mural, but it came up. People asked, ‘Why don’t you have this?’ and ‘Why don’t you have that?’”

He continues, “Murals are very interesting, it challenges you to be educated in art and history. I became an educator and had to present valid information about this culture – that doesn’t happen with a painting. The mural is a ‘we’ thing, even though I’m the director.”

The Baileys Harbor project is the largest mural Rojas has created. He said the process “was like building a symphony up…adding elements, symbolism of people who represent the town, like Phyllis and Gordy Nelson [the founder of Nelson’s Hardware] along with their grandson Adam. The fact that it’s on their wall I absolutely love.” 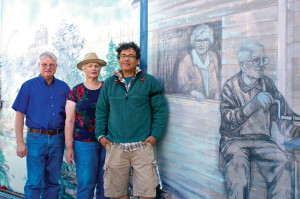 Gary Nelson, current owner of Nelson’s Shopping Center, and his son Adam were supportive of the project and “incredibly helpful,” according to Rojas. “Everything I needed they had for all sorts of emergencies that take place. They were so supportive of the job.”

Rojas even bought all the acrylic paints he used to paint the mural at Nelson’s Shopping Center.

The project began in June 2012 and was completed in August 2013. Rojas said this entire time he was thinking about the project nonstop. When he wasn’t working on the wall, Rojas was sketching and re-sketching to work out the best composition. “I needed to hide from people and look at the space. From morning to evening, 24/7 I was working on the project,” said Rojas.

Rojas would work “mostly anytime I could,” sometimes that could vary between six or 12 hours a day. He adds, “Keeping a schedule is not conducive to doing a good job. Sometimes I’d work at night, when I wanted quiet, and sometimes it was so quiet I didn’t want to stop.”

Even though Rojas needed some quiet from visitors and locals – the mural is very much ours to enjoy. “Murals are public art,” said Rojas. “It’s there forever for everybody.”

The mural could mean many things for many people. Obviously it’s art, but it also is history, beauty, peace, etc. For Rojas and Rafal the mural has meaning for Baileys Harbor’s future.

“Working on the mural every day I had moments of great bliss knowing that I’m glorifying the town,” said Rojas. “A lot of people end up here, but there’s their love for the place. Once you love something you want to protect it – the mural is a protective statement.”

On a separate occasion, Rafal iterated a similar thought, “I don’t think you can have a good future without a vision of your past, and that’s what the mural gives.”