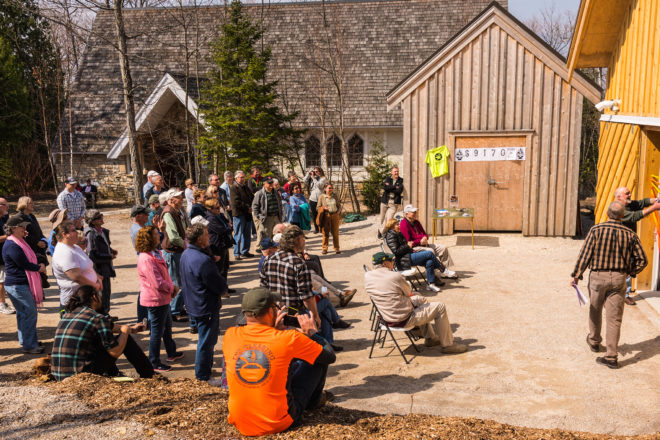 On April 26, The Clearing brought together a group of builders, citizens and Clearing regulars to cut the ribbon on the new forge at the campus. The event marked the final step in a seven-year process to bring the art and history of blacksmithing to Door County.

“It’s been a real effort from a lot of sources,” said Clearing Executive Director Mike Schneider. “Jens Jensen set the bar high at The Clearing and we are not going to lower it. The Clearing has been a patient organization. We don’t borrow money. We haven’t borrowed money for any of our capital projects. That’s one of the reasons it took this long but we’re patient and it pays off.”

It all started with someone looking to donate some equipment back in 2011. From there, more donations of forge materials flowed in and Clearing members and fans took it upon themselves to raise the $375,000.

In 2015, Clearing supporter Siobhan Drummond walked 275-miles from Evanston, Ill., along the lakeshore to the campus. Drummond’s walk supported The Clearing’s Forge and she raised a total of $4,280.

“Over and over again I’ve used the things I’ve learned at The Clearing,” said Siobhan toward the end of her trip. “The whole ethos at The Clearing, staying in touch with the world that you live in, that’s what this has all been about.”

The art of blacksmithing is an easy way to stay in touch with history, craft and creation. 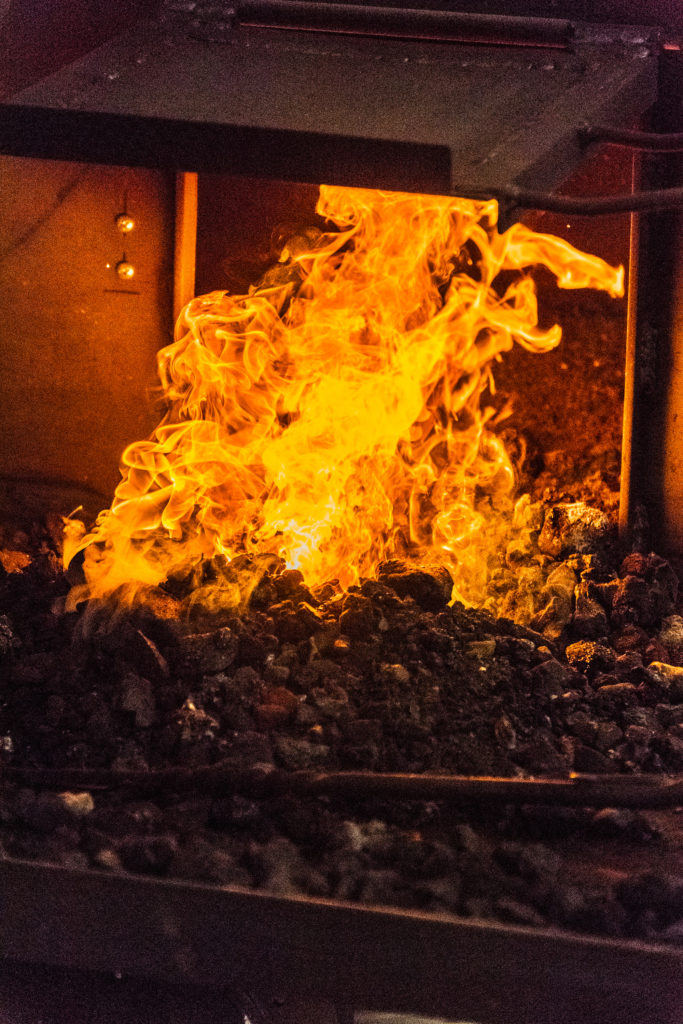 “I just want to thank The Clearing for taking on this project because forging is actually an ancient craft,” said Dan Nauman, a blacksmith from Kewaskum who lent his knowledge and skills in building the new forge. “It’s been a continuum of person-to-person teaching, younger people as well as older people but one person to another.”

Jim Grasse came out of retirement at his company, Ellison Bay Construction, to work on a unique project and a unique piece of property.

“It’s kind of a crown jewel for a contractor to be asked to build at The Clearing. I was really pleased that they thought of me to do it,” said Grasse, who then shifted the focus to his team, which included Martin Jauregui, a Mexican immigrant.

“About partway through the project it dawned on me that immigrants built the first forge or blacksmith shop in Door County and, I don’t know if this will be the last one, but immigrants built this last one. They’re from Mexico, and they were really proud to be able to work on it.”

The Clearing has also hosted a team at the Door County Half Marathon’s Run for a Cause for the past five years. At this year’s event on May 6, the group will support the future of the newly constructed forge again.

Erik Rinkleff, assistant director at The Clearing, leads the group that takes part in the half marathon and Nicolet Bay 5k. He looked back on the long but successful journey to build the forge and looks forward to what comes next.

“There are a lot of great historic forge pieces here at The Clearing, throughout the schoolhouse and the lodge, and now that the forge is here at The Clearing we’re able to continue the legacy that Jensen had started,” said Rinkleff. “It’s an exciting building with lots of possibility.”

The Clearing has already started offering classes in the new forge building. For more information on their summer programming, visit theclearing.org/wp/classes.

Before blacksmith Dan Nauman went into the new forge at The Clearing and demonstrated how to build a curved fire poker, he recited an old story about King Solomon.

“The blacksmith has always been referred to as the king of craftsmen and this story tells why,” said Nauman.

King Solomon built a glorious temple to the god of the Bible. He had the best craftsmen in the land build the temple. It had the finest woods and the finest stone and the finest precious metals in all the land.

Upon seeing this marvelous creation by these fine craftsmen, he decided to have a gala event for all the craftsmen that worked on the temple.

King Solomon wanted to get to know the craftsmen better so he went from guild to guild asking the master of each guild their trade.

He started with the carpenters and he asked, “What is your trade?”

“We’re the carpenters,” they responded. “We built the walls and the altar.”

He then asked, “Well where did you get your tools to make these things?”

“We got them from the blacksmith,” the carpenters responded.

Then he went on to the stone cutters.

“Well what did you build?” asked King Solomon.

“We built the foundation for the altar and we did the splints for the statuary,” the stone cutters responded. 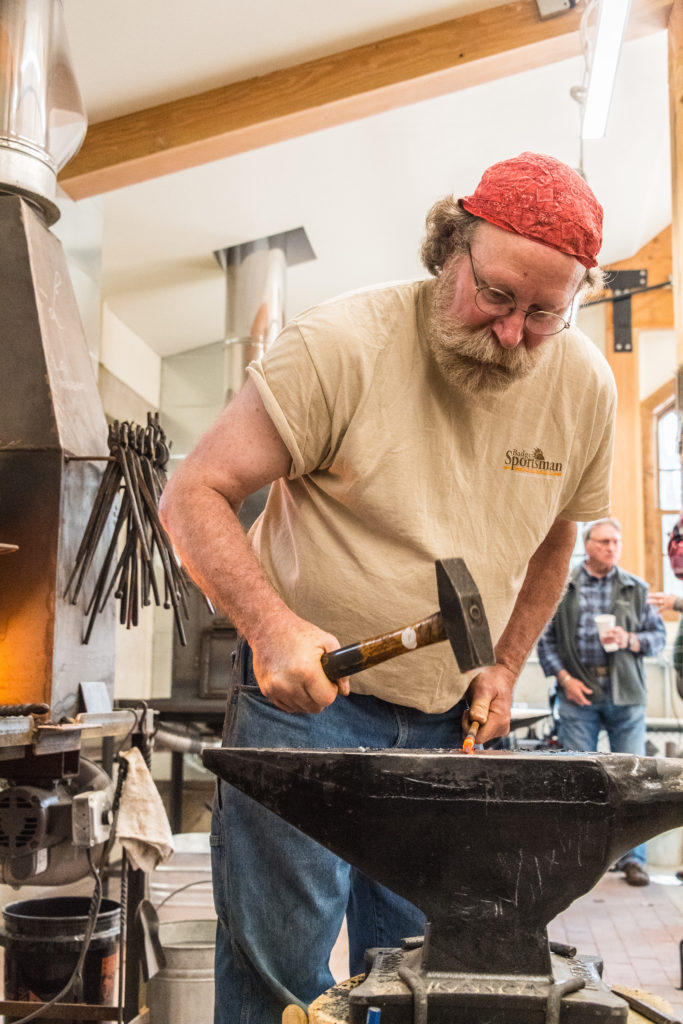 “Where did you get your tools?”

“We got them from the blacksmith.”

So on down the line; everybody replied to the last question, “We got our tools from the blacksmith.”

About this time, the master blacksmith was rushing in from the forge. He was still dressed in his dirty clothing from the shop and he was full of sweat.

He sits down and King Solomon walks up to him and asks, “Well what is your trade?”

“I’m the blacksmith,” he responds.

“What have you made?”

“We did the various pieces for the altar and the door hardware.”

“Well where did you get your tools?” asked King Solomon very curiously. After all, the other tradesmen all said they got their tools from the blacksmith.

“I made them myself,” responded the blacksmith.

King Solomon called out, “I declare you king of the craftsmen and you will dine with me this evening.”

Now, this really upset the tailor. The master tailor snuck under the tablecloth of the guild of the blacksmith and, taking the scissors that the blacksmith made, he snipped the lower corner of the blacksmith’s leather apron to make him look foolish in front of everybody.

To this day there are some smiths that wear leather aprons and they have a little fringe in their leather apron. When you see that, you can think of this story, which was made up by a blacksmith.