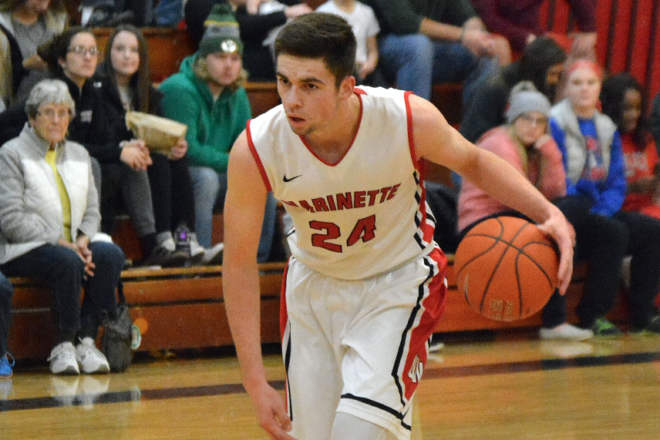 Matt Newman, a 2016 graduate of Sevastopol High School, is making the most of his opportunities on the basketball court as he nears the conclusion of his two-year stint at UW-Marinette. The 6’5” forward has been instrumental in guiding the UW-Marinette Buccaneers to a 10-5 start in the Wisconsin Collegiate Conference (WCC).

“It’s been kind of a rollercoaster season,” Newman said. “We’ve been playing in some streaks and a lot of the success is from our leadership. The team chemistry is going well and the guys are really close, even more so than last year.”

The Buccaneers are in third place in the WCC-East, a seven-team division. The WCC, comprised of an East and West division, includes 13 two-year campuses within the University of Wisconsin System. Fox Valley Technical College officially joined the conference this season as the 14th member. Athletes in the WCC have two years of eligibility.

Like many WCC student-athletes, Newman is using this opportunity as a way to complete his general education requirements while gaining valuable experience on the basketball court.

“They came and recruited me for basketball and showed that they had an interest,” Newman said. “Academically, I knew that I would get that smaller classroom environment and that was a big factor.” 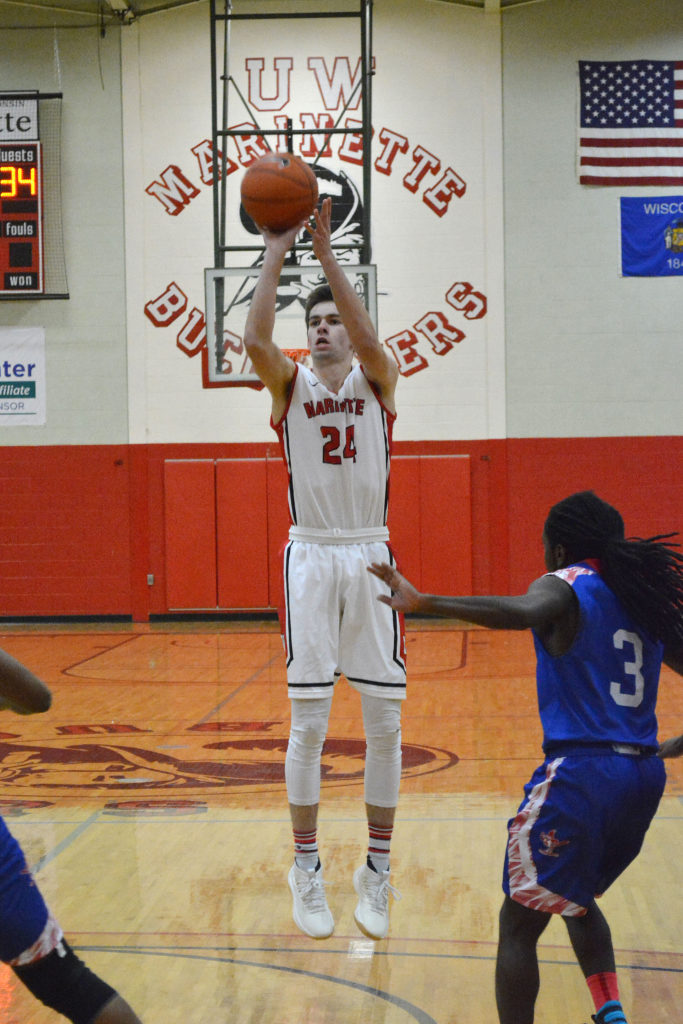 Newman said his class sizes average about 22 students. He intends to transfer to UW-Stout to earn his bachelor’s degree in engineering technology and would like to continue playing collegiate basketball.

“I want to play on a team if I can,” he said. “I want to keep going for as long as I can. The two years I spent at UW-Marinette have been beneficial and I think those skills will help me to transfer to a Division III school.”

Newman has started all 39 games of his collegiate career with the Buccaneers and continues to put up strong numbers this season. He leads the team in scoring this season with 141 points (14.1 ppg) while making 32 of 64 shots (.500) that includes going 15 of 32 (.469) from three-point range. Newman has also connected on 83 percent of his free throws.

His efforts on the court are one of the reasons the Buccaneers have improved from a 9-14 finish during their 2016-17 campaign, Newman’s freshman season. When not in the classroom or studying, Newman can be found in the campus fieldhouse working on his game or in the weightroom after practice.

“A big part of (my success) is from time put in the gym and the weightroom,” he said. “The confidence that I have in myself has allowed me to play as well as I am playing now. I have become more physical and my basketball IQ has improved as I have matured.”

Newman’s parents have been regular attendees at his games, with at least one of them in attendance at every game.

“My parents have been very supportive and have made pretty much all of my games in the last two years,” he said.

Joining Newman this season at UW-Marinette is his former Sevastopol teammate Hunter Ebel.

“I like it a lot,” he said of having Ebel on the squad. “You can definitely tell that we’ve been playing together for a while. I’ve been playing with a lot of the guys over the last two seasons and our team chemistry has just been so good all around.”

With the regular season finale slated for Feb. 10, Newman and the Buccaneers will look to extend their season in the WCC tournament in mid-February.