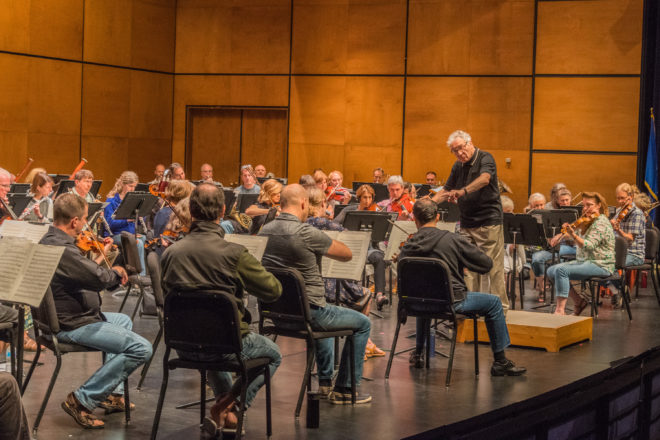 Victor Yampolsky conducts a rehearsal of the Peninsula Music Festival Orchestra. He finished his 33th and final season with the festival this year, but he’ll return to the area Sept. 28 to conduct the inaugural concert of the new Weidner Philharmonic at Green Bay’s Weidner Center on the University of Wisconsin-Green Bay campus. Photo by Len Villano.

Victor Yampolsky was pleased by the “out of the blue” invitation that put him on the podium conducting the inaugural performance of the newly formed Weidner Philharmonic at the University of Wisconsin-Green Bay on Sept. 28 at 7:30 pm.

This new orchestra makes its home in the Weidner Center for the Performing Arts on the UW-Green Bay campus, and it’s committed to professional presentations of engaging and creative musical programming to showcase the talents of UW-Green Bay music faculty, the accomplished orchestral musicians who live and work in the region, and the outstanding acoustics of the Weidner’s Cofrin Family Hall.

Yampolsky said he’s particularly proud that this new ensemble has stepped in to fill the role of the Green Bay Symphony Orchestra, which shut down in 2015 after more than 100 years of existence.

“UW-Green Bay is proud to make this investment in the culture of our city and region,” said Randy Meder, an associate professor and UW-Green Bay Music Program chair, upon the announcement of the new orchestra. “It’s a privilege to be able to build upon a decades-long tradition of quality professional classical music in our area. We can’t wait to get started!

“As an extension of UW-Green Bay, the orchestra’s mission resonates with the mission of the university,” Meder continued. “The Weidner Philharmonic will be a driver of cultural enrichment for the campus and surrounding community; serve as a laboratory for collaborative scholarship through the curation, direction and public performance of musical works; offer valuable educational opportunities to UW-Green Bay students in all areas of study; foster diversity and inclusion by selecting works that represent a wide array of musical genres and voices; [build] bridges to new orchestral audiences; and [embody] the deep value of community-based partnerships by engaging musicians from across northeast Wisconsin.”

Yampolsky, who just retired from his 33rd season as music director of the Peninsula Music Festival in Door County, will conduct Samuel Barber’s “Overture” to The School for Scandal and Dvorak’s Symphony No. 9 in E minor, “From the New World.”

The Russian-born Yampolsky is a graduate of the Moscow Conservatory who began his musical career as a violinist/assistant concertmaster and assistant conductor with the Moscow Philharmonic. In 1973 he emigrated to the United States and was soon playing violin in the Boston Symphony, working his way up to second violin. He is a much-sought guest conductor who has conducted more than 80 professional and student orchestras throughout the world.

A pre-concert dinner catered by the Hyatt Regency in Green Bay will be held in the Weidner’s Fort Howard Hall. Doors will open at 5:30 pm; dinner will begin at 6 pm.

To purchase tickets to both events, visit weidnercenter.com.

The Weidner Philharmonic’s next concert will take place Feb. 22 and will feature the orchestra performing Max Steiner’s Oscar-nominated score to the 1942 classic Casablanca while the movie starring Humphrey Bogart, Ingrid Bergman, Claude Rains and Paul Henreid plays on a big screen.