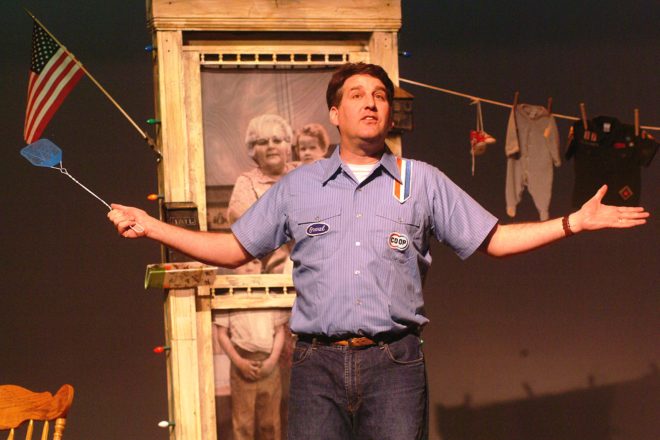 Former Seinfeld writer and Tonight Show regular, Pat Hazell has found a unique way to communicate to the ever-growing baby-boomer theatergoer. In a salute to pop culture/Americana, boomer humorist Pat Hazell highlights the touchstones of the American family upbringing in his play, The Wonder Bread Years. Hazell will bring this comedy to Southern Door Community Auditorium Nov. 25 at 7 pm.

The Wonder Bread Years, written and directed by Hazell, is a hilarious one-man show and reminds us that there is still a kid inside all of us, and a sense of wonder waiting to be unlocked. A salute to pure escapism and the baby-boomer generation, The Wonder Bread Years is akin to opening a time capsule packed with hula hoop contests, lawn darts, Kool-Aid, Rock ‘Em, Sock ‘Em Robots, Big Wheels, Eskimo Pies, Clackers, Toughskin Jeans, Barbie Dolls and riding in the way back of the country squire wagon.

“The Wonder Bread Years is a fabulous and fun show that lets the older generation savor the past with a hilarious walk down memory lane and will enlighten the younger generation with a look at what the world looked like when their parents were their ages,” said Terry Lundahl, program director for the Southern Door Community Auditorium.