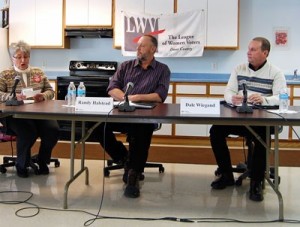 Shirley Senarighi, moderator for the Door County League of Women Voters Candidate Forum, asks the first question during the March 8 forum between challenger Randy Halstead (center) and incumbent Dale Wiegand for the Door County Board of Supervisor’s 16th District seat.

Jacksonport Town Hall was the site on the morning of Saturday, March 8, of a candidate forum sponsored by the Door County League of Women Voters.

Dale Wiegand, the incumbent, explained that he is a Sturgeon Bay native who began his political career as first a supervisor and then chair of the Egg Harbor Town Board before being elected to the county board in 2004. He currently serves on seven county committees and chairs three of those – the ADRC Advisory Board, the Emergency Services/Communications Committee and the soon-to-be disbanded (because their work is done) Ad Hoc Fair Study Committee.

The challenger is Jacksonport native Randy Halstead, who explained that he is the fourth generation to work the family farm. He served on the Sevastopol School Board and is in his third term as a town supervisor in Jacksonport.

People in attendance were asked to submit written questions that were screened by league members in order to prevent duplication and inappropriate questions. A total of 13 questions were submitted and answered by the candidates.

One of those questions was “What can our state representatives do to better support the county board?”

Wiegand answered first, mentioning that he had recently spoken at a public hearing in Madison as chair of the Emergency Services/Communications Committee, speaking in support of an updated 911 system. What he saw in the hearing chamber was a roomful of legislators there to rehash ancient politics instead of moving forward on issues, so his message was that Madison has to get its house in order.

“It seemed like they were fighting amongst each other. They were not staying on task, listening to the people that went there for the hearing. They were bickering about things in the past…It’s not getting anything done. It made me kind of disgusted. When it was my turn to get up there and talk, I almost wanted to point my finger and say, ‘Shame on you for not working together for something so important.’ We have to somehow get the message to them that ‘You’re working for us. We’re the boots on the ground here in the county, the townships, the villages. You dictate to us pretty much what we should be doing. Give us some help here. Don’t argue amongst each other and try to be politicians.’ Get them back to working for the people and get the state of Wisconsin back to the way it was at one time.”

And Halstead’s response: “I think for the most part, Garey Bies (1st District Assembly) and Frank Lasee (1st District Senate) do a fairly good job. If we have concerns, we get ahold of them and they do a pretty good job for the Town of Jacksonport. If we really want to do something, eliminate the party system and have everyone get elected on their own good merits and they could work together.”

The candidates were also asked, “Do you support the county board lobbying the state legislature for a more non-partisan redistricting system?”

It was Halstead’s turn to answer first. “The county board’s supposed to be non-partisan. They should not get involved in that at all.”

Wiegand, as a member of the county board’s Legislative Committee, which has been studying the issue to bring it before the county board, had a very different take. “I think they should get involved. I think it’s a non-partisan issue myself. It doesn’t matter if it’s a Republican or a Democrat, it seems like every 10 years, whoever at that time is in control, whether it be Senate or Assembly, it seems like they always want to redistrict. That comes to a tune of $10 million or more each time. That’s a big chunk of change taken away from us to do our roads, to carry on our services. I don’t think it’s a political issue. I think it should be done so it’s on a fair level. I support that we do send a resolution to the state stating that we want this, every 10 years we want a change, we want it done properly, we don’t want it so you can stack each side with who’s going to win the next election, because that’s what it seems like it’s doing with the gerrymandering that’s happening right now.”

To view the entire forum go to youtube.com and search for “LWV:  Candidate Forum, Door County (WI) Board.”