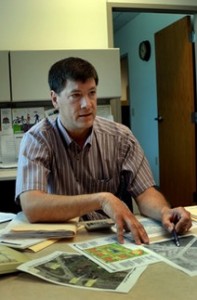 After the feasibility study for a Four Seasons Market as part of the West Waterfront Redevelopment Plan was completed Sturgeon Bay Community Development Director Marty Olejniczak says, “It looks like we might have a project to pursue now.”

The initial assessment of the proposed Four Seasons Market as part of the West Waterfront Redevelopment Plan in Sturgeon Bay is in, and the prospects are good.

“It looks like we might have a project to pursue now,” says Marty Olejniczak, Sturgeon Bay’s Community Development Director.

Vandewalle and Associates Inc., the Madison- and Milwaukee-based development company that Sturgeon Bay hired to study the local food market’s feasibility, submitted their report to the city on Aug. 22, and the city’s Waterfront Redevelopment Authority discussed it on Aug. 30.

While conducting the study, interviewers from Vandewalle and Associates talked to a number of local food producers as well as local and regional developers. Olejniczak says the interviews may have made the study a little lengthier and more expensive, but they resulted in a better assessment.

“Rather than just rely on number crunching, they sat down with actual producers who may want to be part of the development, or may not be able to be part of it but still wanted to comment on it,” says Olejniczak.

According to the study, everyone interviewed about the market reacted positively, with many hoping to become involved in the project.

Ann Renard of Renard’s Cheese was one of those interviewed during the process. She says she appreciated Vandewalle and Associates’ efforts to test the waters with local producers.

“I liked the fact that they were concentrating on core Door County businesses and offering it out,” says Renard. “Obviously, a facelift for that area of town would be a benefit for Sturgeon Bay and for Door County.”

The main goal of the Four Seasons Market project is to create a local food hub where retailers could share space and sell their wares on Sturgeon Bay’s west waterfront. They’d also be able to link up and potentially increase their options for marketing and distribution in markets like Chicago or Milwaukee.

“Door County is a brand in and of itself, and for some of our products, like cherries or fish, there’re ways to get them into regional markets more than they are now,” says Olejniczak.

Renard, whose business is already in growth-mode because of the new, expanded store she and her husband Chris will be opening this fall, says the increased distribution opportunities have her excited.

“They asked me ‘How do you feel about putting your product on the same truck as Wienke’s [Market]?’ And I said I think it makes sense. Why wouldn’t we want to help each other out?” she says. “If we do it as a collaborative effort, we’ll all benefit more.”

Olejniczak says the city now has to decide how to proceed with the Four Seasons project, which includes a restaurant and gathering space and is just one part of a West Waterfront Redevelopment Plan that lays out new opportunities for housing, lodging, commercial businesses, and walkways.

“There’re a couple routes to take,” he says. “We could follow the first round of redevelopment we did with Stone Harbor and the Maritime Museum where the city proactively acquired the land.”

The other option, according to Olejniczak, is to work with potential developers in a more indirect way, such as creating a Tax Increment District. The city used this approach during the redevelopment of the former PBI Shipyard site.

The Vandewalle and Associates study suggests Sturgeon Bay should obtain control of the site to make sure the development there is consistent with the city’s goals.

Olejniczak says that if and when the project moves forward, the city will definitely be involved financially at some level.

“Whether it’s Tax Increment Financing or down-writing the cost of the land to make it more worthwhile, something will happen,” he says. “But at this point we don’t know how much. The next step is to sit down and do a finance package.”

“Generally we have a positive feeling, but there are still risks involved if the city decides to pursue the redevelopment,” he says. “We have a lot of work ahead of us.”